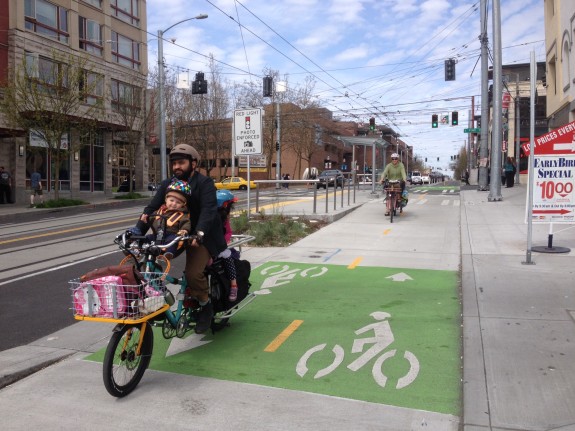 This photo of Davey Oil, Madi Carlson and their respective kids on Broadway is my favorite SBB photo of 2014.

2014 was a pretty exciting year for biking in Seattle. A bunch of stuff that has been in development in recent years — like the Broadway Bikeway and the Bike Master Plan update — came to fruition this past year. But Mayor Ed Murray also rewrote the rules on bike and safe streets projects, surprising even longtime advocates with fast and bold action both in expediting the launch of Pronto Cycle Share and building a protected bike lane through the heart of downtown at what can only be described as the Seattle version of light speed.

In 2015, we look forward to more pilot projects for safe streets, including projects to connect neighborhoods to the 2nd Ave bike lane and to improve other long-problematic spots like Roosevelt/U Bridge and Rainier Ave. But we are also excited about the potential for pilot projects to better activate public space, like some experiments with public plazas and car-free areas. And, of course, we hope Murray and his team have some more awesome safe streets surprises up their sleeves.

2014 also saw a deeper spreading of a culture shift in the way people all across the region think about traffic violence. More and more communities are no longer seeing tragic traffic deaths or serious injuries as the unavoidable costs of doing business. From Kenmore to Kirkland to Rainier Valley to Puyallup to West Seattle to downtown Seattle, people have gathered to honor victims of traffic collisions and to figure out how we can make sure it never happens again. Seattle Neighborhood Greenways has played a vital role in this movement by connecting with families and helping to organize vigils and memorial walks.

In 2015, Seattle and the Puget Sound region need to get serious about a bold and achievable Vision Zero effort. That’s zero deaths and serious injuries. Zero.

Speaking of which, we never get to Vision Zero without investing in it. We have an excellent Bike Master Plan — which is really also a bold safe streets plan with a connected bike route element — but it needs a boost in funding if we are going to finish it on time (or better yet, early). The city’s budget for 2015 falls far short of the estimated $20 million needed annually to complete the plan on schedule.

In 2015, Seattle needs to come up with and pass a funding tool to replace and improve on the Bridging the Gap property tax levy, which expires at the end of the year. This is Seattle’s chance to get serious about safe streets, better transit and basic road maintenance. That means full funding for the Bike Master Plan and big investments in the Pedestrian Master Plan top tier projects.

In 2014, Seattle Neighborhood Greenways organized a trip with Councilmember Sally Bagshaw and several other city officials to head down to Portland to experience Sunday Parkways. Needless to say, everyone was blown away (even those of use who had already been to Sunday Parkways before, it’s just an amazing thing to see every time). As a result, the City Council and the Mayor’s Office added funding to expand Summer Streets into something more like Sunday Parkways.

Now that’s it’s 2015, we are already counting down the days before Seattle’s first expanded Summer Streets event. I can’t wait to join thousands of neighbors on an afternoon of fun on a car-free neighborhood loop. I’m not sure many people in Seattle have any idea of how much they are going to love the revamped Summer Streets, especially if the city can find some good corporate partners and pull it off well. These events could become the centerpieces of civic family fun starting this summer.

Below is a look at the most visited stories on SBB in 2014. It’s a bit odd, since what gets big on the Internet can be rather random. Naked people always do well. Quirky short stories do, too. And with so many new people biking each year, that’s a whole lot of new people who apparently want our purposefully-incomplete rainy biking advice from way back in 2012.

I am so thankful that as a fully independent news site, our financial support is built on relationships with local businesses and support from readers. As such, I don’t feel compelled to chase clicks every day just for the sake of boosting stats. Sometimes it happens, which can be fun. But if I had to spend all of 2015 trying to recreate the success of a story about 5.25″ floppy disks (which I didn’t even report originally, that was Mike Lindblom), I would hate my job.

Big thanks to our sponsors and all of you who give a bit of hard-earned cash every month through our subscriber program to allow us to report on stories that matter to the story of safe streets in Seattle, even if those stories don’t always have the viral factor needed to climb Reddit.

And finally, here are the people who commented the most in 2014. All male names, which is interesting. Thanks, guys, for participating so much! If anyone has any suggestions for how to create a more inviting comment environment for women, I would love to hear your thoughts either below or via email. 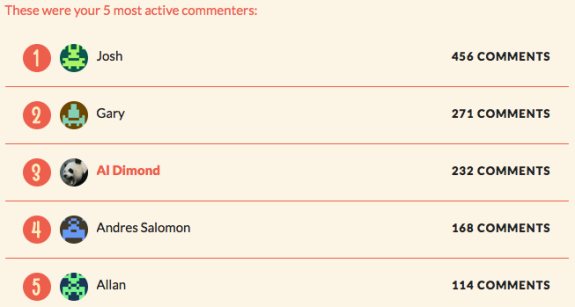