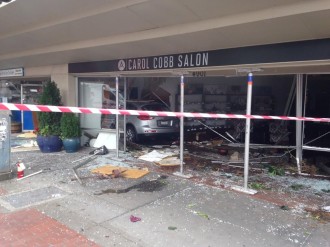 Rainier Ave has been the scene of far more than its share of death and injury, serving both as the main commercial drag through Rainier Valley and one of the city’s most dangerous streets. There were 1,243 collisions, 630 injuries and two fatalities between January 2011 and September 2014.

But the city is no longer ignoring the problem, and SDOT Traffic Engineer Dongho Chang announced a Road Safety Corridor Project in early October. The first public meetings are this week, including one today:

In recent months, Rainier Ave has been the scene of some particularly terrifying collisions. In late August, a person driving down Rainier in Columbia City lost control and ran up on the sidewalk and sped through Carol Cobb Salon, then through the interior wall into a restaurant next door. Seven people were injured.

On Halloween night, a person driving a truck lock control and sped down Rainier Ave in Rainier Beach, and for three blocks he smashed into nine cars, sending ten people to the hospital. I guess you can add at least ten to the injury count mentioned above. Here’s how one family described the experience:

These extreme instances are just the most eye-catching ones. Hundreds of smaller collisions kill and maim people on this street, and residents above 60 years old are disproportionately killed. Most people killed are inside cars during collisions, but many people have also been killed and seriously injured while crossing the street on foot.

This must end. Rainier Ave is packed with destinations, and Rainier Valley residents should be allowed to cross the street without fear. This dangerous street runs through the heart of Seattle’s most diverse and affordable neighborhoods. The city has the tools and know-how to slow speeds, make crosswalks shorter and improve safety and comfort for everyone.