Seattle gets stack of Federal funds for protected bike lanes downtown, on Broadway 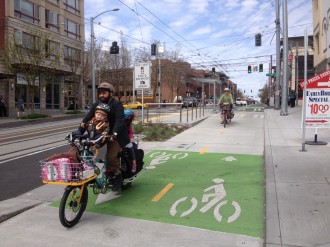 Seattle will officially receive a stack of Federal cash to build protected bike lanes downtown and on Broadway (we reported on the recommendation earlier this month). The city has also received nearly $400,000 to help low-income residents access Pronto bike share (I will write more about this in a future post, so stay tuned).

As we reported previously, the city is moving ahead with a relatively low-budget pilot protected bike lane on 2nd Ave, which will be ready in time for the September launch of Pronto Cycle Share. These Federal funds will provide the resources to design and (help) build permanent protected bike lanes in the next couple years.

The Feds will also invest in extending the Broadway Streetcar to at least Roy, a project that will also extend the Broadway Bikeway to cover the entire commercial length of Broadway.

These investments are a great example of how the Federal government can help cities accelerate the bike-friendly transition that nearly every big US city has at least said they want to make. Relying only on municipal transportation funds for major biking and walking safety is not enough. Our nation needs top-down leadership on biking and walking safety.

Imagine if every US city this year received millions for protected bike lanes in their city centers like Seattle will. This is the kind of national leadership that led to the safe streets revolution decades ago in countries like the Netherlands. Dutch cities wouldn’t be the symbols of safety and bikeability that they are today had their national government failed to help make the investments. In 1975, streets in the Netherlands were 20 percent more dangerous than streets in the US. Today they are 40 percent safer.

More details on the investments, from the City Council:

Summary of City of Seattle Projects Recommended for Funding:
Regional

18 Responses to Seattle gets stack of Federal funds for protected bike lanes downtown, on Broadway