Under the cover of an oddly warm April night, an unidentifiable person hidden in shadows and conveniently missed by every security camera pedaled a high-tech stealth bakfiets into the Seattle City Hall parking garage. Aides to Mayor Ed Murray and Councilmember Tom Rasmussen were there waiting to receive the “package.” They brought three wheelbarrows and a peanut butter sandwich (no crusts), as instructed.

Never removing the leather gloves or uttering a word, the porter pulled back the cover to reveal a pile of bills, all unmarked. Hands shaking, the aides started grabbing clumsy stacks of the cash and tossing it into the wheelbarrows. A careful count would later come to the agreed upon number $15,500,000, but they didn’t dare count it in front of this dangerously serious person on a cargo bike.

The mystery person mounted the giant bike and gave a quick glance at the meager peanut butter sandwich on store-bought wheat before throwing it into the terrified face of the mayor’s aide. The person took a quick pedal forward to trip the sensor that opens the automatic gate, but before pushing off, turned back and uttered a deep, disturbingly gutteral sentence: “Next time I come, you better have some fucking bike lanes.” Then poof, disappeared down James St.

The city had its money, but at what cost? Was dealing with the International Bicycle Conspiracy really worth all this? They had no choice now, though. They had the cash, and they had better get to work on those bike lanes before the mystery messenger returned.* 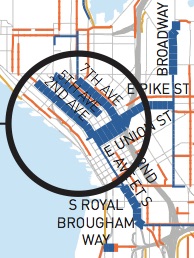 Early plans for bike lanes to be built in 2016. Routes could change depending on outreach in 2015.

We’ve written about these projects and these grants before. Though most the money is not for bike lanes, $5.8 million will go to planning and constructing a network of protected bike lanes in the Seattle city center. Interestingly, previously announced funding to extend the delayed Broadway Streetcar (and, thus, the bikeway) is not listed.

Now that the city has officially accepted the money (mostly from the Feds but some from the State as well), here’s the list of projects they’re gonna build according to a press release:

* The details of this story were compiled through extensive guess work and deduction, though we did not confirm or deny through sources. But we can’t imagine any other way to transfer $15.5 million, though admittedly we have no experience in the world of finance.

This entry was posted in news and tagged federal government. Bookmark the permalink.