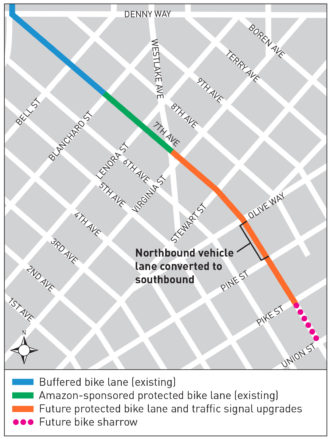 From the project fact sheet.

7th Ave is a direct line from Dexter to downtown, so it’s no surprise that the street is one of the most important bike routes in the city center.

While the street got some nice buffered bike lanes between Dexter and Westlake back in 2010, people biking downtown are still dumped into mixed lanes to navigate downtown traffic.

But that is set to change as early as six months from now as the city moves forward with delayed plans for a protected bike lane between Westlake Ave and Pike Street.

This is one key piece of finally connecting downtown to popular bike routes to the Fremont Bridge, the Burke-Gilman Trail and beyond. It brings the northend protected bike network within a few blocks of the 2nd Ave bike lane. It also connects the growing South Lake Union to major transit connections downtown (why the city need a quality bike share system).

The current plan is for a one-way southbound lane on the west side of the street that turns into sharrows (yes, sharrows…) between Pike and Union. Many downtown-bound users will likely use Pine Street to get to 2nd Ave, so there will still be five blocks of mixed-traffic biking. This is so tantalizingly close to finally connecting… 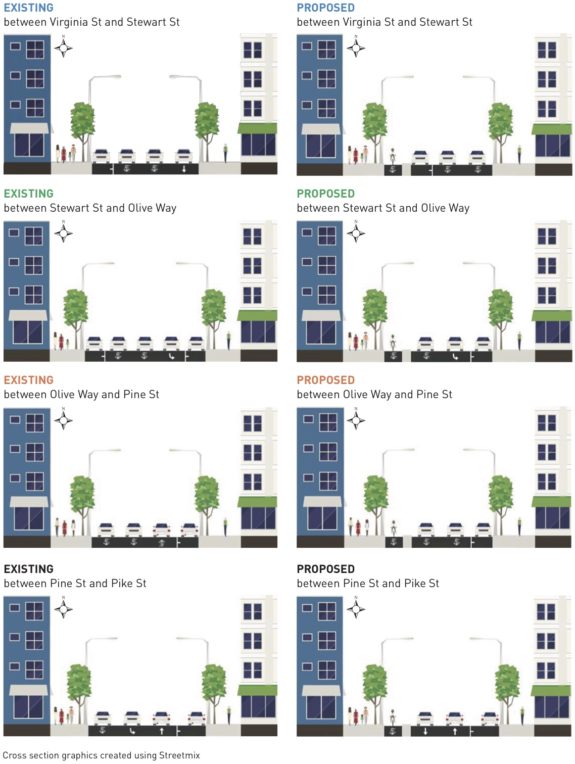 There is no northbound lane planned for 7th, though SDOT will begin planning a protected bike lane on 8th Ave next year, according to Community Outreach Lead Sara Colling:

We studied several variations of the protected bike lane on 7th Ave. A one-way couplet on 7th and 8th avenues rose to the top. We focused on 7th Ave first partly because 8th Ave has interim bike facilities (a bike lane for part of it and sharrows for the rest). We plan to start design for a northbound PBL on 8th in 2017.

However, the two-way 2nd Ave bike is still set to extend north from its current terminus at Pike St to Denny Way in summer 2017. When it opens, people trying to head north out of downtown will finally have a quality option that is either protected or low-traffic.

Pike and/or Pine will remain the biggest missing connection downtown, and the 7th Ave project will only highlight the need more clearly. In a perfect world, the city will see this need and at least create some low-fi, paint-and-post bike lanes to help people trying to get between Capitol Hill, 7th Ave and downtown.

And, of course, as connections between the northend and downtown finally get closer, the need for comparable southend connections grows that much more stark. Planned bike lanes on Dearborn are crawling forward, delayed by the slow process for getting WSDOT approval (the bike lanes would make changes near freeway on-ramps, triggering the need for state approval). But even when those go in, there are still major gaps between downtown and routes heading to the International District and Southeast Seattle.

Founder and Editor of Seattle Bike Blog.
View all posts by Tom Fucoloro →
This entry was posted in news and tagged 7th Ave. Bookmark the permalink.