This terrible shifting bike lane will get a sorely-needed upgrade. Photo from SDOT. 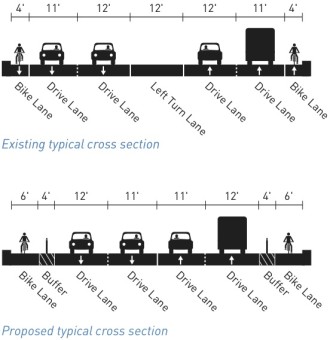 Dearborn Street is both flat and useful. So even though it is not packed with destinations itself and though it serves the motor vehicle network mostly as a way to access I-5 and haul freight, it is also a highly desireable bike route. It connects downtown neighborhoods to bike routes in central and southeast Seattle, as well as the I-90 Bridge.

But today, Dearborn only has a very skinny bike lane squished far off to the side of the street next to very fast-moving traffic. And at key points where Dearborn meets busy streets or highway ramps, the bike lane is either inadequate or disappears entirely.

That could change in a couple months as the city plans a major bike lane upgrade. 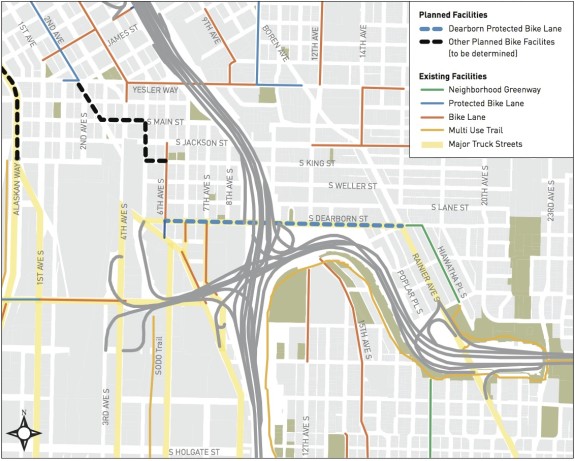 The crux of the design of a wider bike lane with a wider buffer space from traffic, lined with reflective plastic posts. To put the improvement in context, the four-foot buffer alone will be as wide as the entire old bike lane. Especially since nearly every person driving is going at least eight mile per hour over the speed limit, more separation is vital both for safety and comfort. 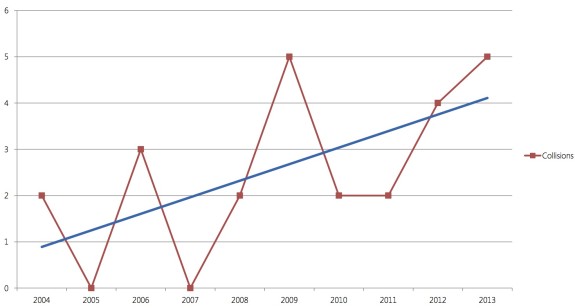 UPDATE: Added this graph from a July presentation to the Seattle Bicycle Advisory Board.

The goal of the project is to connect the neighborhood greenway bike route on Hiawatha Pl (which connects to the I-90 Trail) to 6th Ave S, an existing bike route leading into the heart of the International District.

No bike lane can change the fact that Dearborn crosses through a freeway interchange wasteland, but having a protected space to navigate this challenging area is a big deal for activating existing bike routes. Better yet, the neighborhoods most helped by this connection are in southeast Seattle, where quality bike connections to the city’s employment center have lagged most.

It also sets the stage for what may be the single biggest missing piece of bike infrastructure in the whole city: Protected bike lanes on Rainier Ave (that is not yet on the city’s schedule for bike lane work, so it’s gonna take a lot of grassroots work to make it happen).

UPDATE: Below are some design images from a July presentation to the Seattle Bicycle Advisory Board.

Unfortunately, the bike lanes will not be perfect. They will still need to cross highway ramps, and there won’t be new signals to control that maneuver. Places where ramp traffic crosses the bike lanes will be better marked with green paint, but this probably will not achieve the city’s all-ages-and-abilities goals for bike routes.

Another big problem: The route still will not connect to downtown because there is no good bike connection between the International District and downtown. Plus, 6th Ave only has a bike lane southbound, making it an incomplete connection on its own.

Dearborn is a big missing piece, but it’s not enough.

The good news is that the city plans a connection via 5th Avenue and S Main Street as part of the Center City Bike Network. That connection is currently planned for 2016 implementation.