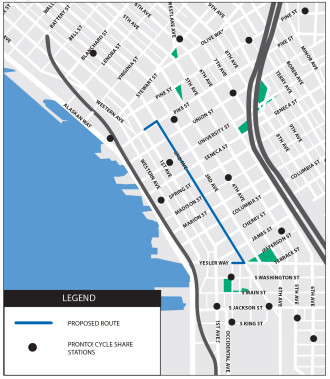 In a city known for it’s overly-laborious process for just about any significant decision, Mayor Ed Murray has given the green light to build an ambitious protected bike lane on 2nd Ave to be in place by the time Pronto Cycle Share launches in September.

The two-way bike lane will be a relatively low-budget pilot project meant to demonstrate the potential of having a network of protected bike lanes in the city’s center. It will also be a vital piece to the success of Pronto, since the bike share system depends on trips by people who would likely not find today’s downtown bike routes inviting or comfortable.

When the bike lane launches, it will not only attempt to fix the awful existing southbound bike lane, but it will provide a brand new northbound option that has be a vital missing piece to biking downtown.

Bicycle and Pedestrian Program Manager Sam Woods briefed the Seattle Bicycle Advisory Board Wednesday on the progress her team is making on the project, which is so far on schedule and getting close to full design. Outreach to 2nd Ave businesses and organizations has begun to help make sure everyone’s unique needs are met.

When the mayor announced the pilot bike lane in early May, it surprised even the most optimistic bike advocates in town. But with the Green Lane Project in town and experience from a growing number of example lanes around town and throughout the nation, Seattle has the ability to create a transformative bike lane in downtown with little time and funding in the existing Bike Master Plan budget. 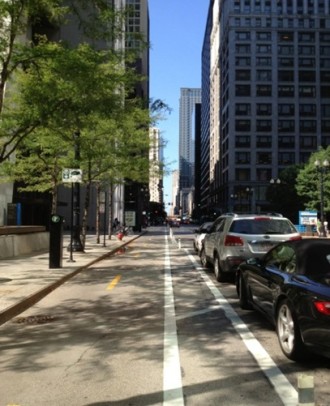 2nd Ave will look nearly identical to Dearborn Street in Chicago (but with slightly wider bike lanes). Image from SDOT.

Because it is a low-budget pilot project, the lane will have very few bells and whistles. Unlike the Broadway Bikeway, there will be no cement curbs or planting strips. Instead, the lane will be separated from travel and parking lanes by paint and reflective plastic posts. The bike lane will be on the east side of 2nd Ave, so there will be no conflicts with transit and no need for floating transit islands. And the path will not be repaved (though any potentially dangerous cracks of seams will be sealed and smoothed out).

Essentially, it will look a lot like Chicago’s Dearborn Street protected bike lane. In fact, the city is using a photo of that project in their outreach materials. And it’s also worth noting that new (pending confirmation) SDOT Director Scott Kubly worked on that Chicago project, so he should have experience with to help make it work. 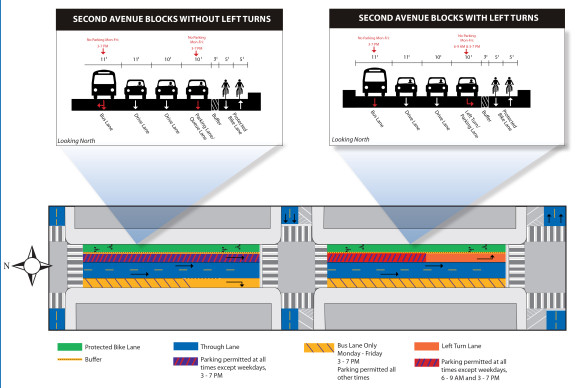 The design essentially erases the existing and super dangerous door-zone bike lane, which has been the scene of at least 60 bike-involved collisions in just the past four years. Many more than that occurred but were not reported. Of those 60 collisions, half were due to a person driving a car turning left across the bike lane. The existing 2nd Ave bike lane is pretty widely considered the worst bike lane in Seattle.

The existing curbside parking lane will be shifted west to the other side of the bike lane and separated from people biking by a buffer space. This will help avoid dangerous situations where people exiting cars open their doors into the path of someone biking.

The parking lane space will turn into a left turn lane where left turns are allowed. During peak evening commute hours, parking will be restricted to allow more left-turning cars to queue up. Much of the existing traffic on 2nd Ave has nothing to do with capacity of 2nd Ave itself. Instead, it only gets really bad if the I-5 on-ramps are backed up through downtown, backing up those left turning cars. This project can’t fix that problem, of course, but it aims to provide a space so cars that are not turning can get through.

The existing bus lane will remain how it is today, providing movement for buses during peak hours, but changing to on-street parking off-peak.

To eliminate conflicts between left-turning cars and people biking and walking, left turns will be prohibited except on a left turn arrow. People walking and biking will get the red hand during the left-turn phase. Not only will this allow the bike lane to function safely, but it will also increase the comfort for people walking along the east side of 2nd Ave. People in cars trying to turn left will no longer be able to try to inch their way through a packed crosswalk, which is a problem today.

This brings us to one cost-and-time-saving element that is making it possible for the city to build the lane in time for the launch of Pronto: People biking will be directed to obey the walk signal. There will be no bike-specific signals, like the ones on Linden or Broadway, at least not when the bike lane opens.

Again, it is a pilot project that can be adjusted, improved or even redesigned at a later date. In fact, the city has grant money to develop a downtown protected bike lane network over the next couple years.

At the lane’s endpoints at Pike and Yesler, new all-way-walk phases will be created to allow people to transition in and out of the bike lane. The all-walk phase at Yesler will also be faster and better for people on foot, since that intersection is terrible and confusing today. The bike lane will also continue for a block or so on the north sides of both Pike and Yesler to help the transition.

Beyond bikes, the bike lane will also shorten the crossing distance for people walking across 2nd Ave. Today, the street is insanely wide, and people are often left in the middle of the street when the signal changes. This is especially a problem for people with mobility issue or who simply move more slowly than others. So having less distance to cross in front of cars will make 2nd a much more comfortable place for people on foot.

I can’t help but feel like this bike lane is the start of a new era at SDOT, with a little less talk and a lot more action. Obviously, there will still be a lot of talk (this is Seattle), but sometimes the city just needs to act, and act now. With bike share coming soon and downtown bike routes dangerous and uncomfortable, this is a time to act. It’s so refreshing to see the city rise to the challenge.

Here’s a letter SDOT is sending to residents, businesses and property owners along the route:

This fall, the Seattle Department of Transportation (SDOT) is changing the current bike lane on Second Avenue between Pike Street and Yesler Way to a two-way protected bike lane.

Protected bike lanes physically separate people on bikes from people in cars through the use of parked cars, planters, posts or other similar treatments.

The Second Avenue Protected Bike Lane Demonstration Project will make Second Avenue safer and more predictable for everyone—not only people on bikes, but drivers and pedestrians, too. It will promote healthy lifestyles and help attract the many talented workers for whom safe and pleasant commuting options are a priority. And it is a significant first step toward constructing a Center City Bicycle Network, a planned series of high-quality bike facilities running throughout Seattle’s downtown core.

Enclosed is a project brochure detailing how the protected bike lane will work on Second Avenue. For more information, please visit the project website at www.seattle.gov/transportation/2ndAvepbl.htm.

Your feedback is critical to ensuring a successful project that benefits all users. If you have questions or comments, or need to schedule a time to meet, please contact me by email at [email protected] or call 206-684-5189.