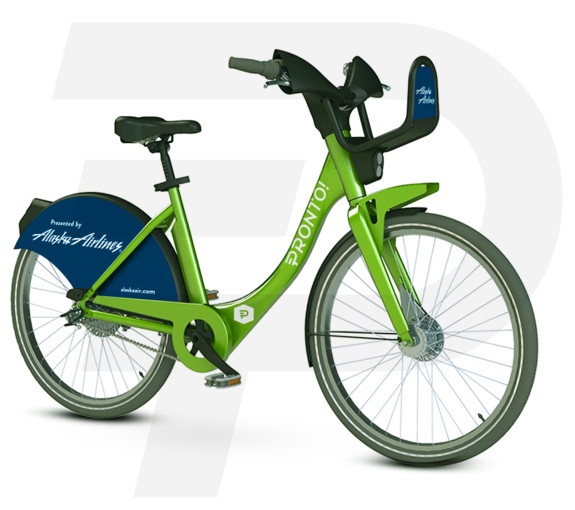 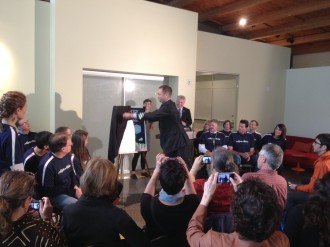 Puget Sound Bike Share announced the name, look and major sponsor of the system set to launch this fall. Alaska Airlines will have branding on the first 500 Pronto! Emerald City Cycle Share bikes, which make up the initial launch in the U District, South Lake Union, Capitol Hill, Eastlake and the downtown neighborhoods.

“Will they be available at the airport?” asked one person sporting an Alaska Airlines shirt to laughs (No).

Alaska Airlines will contribute $2.5 million of five years to support the program.

“I made one call, and they said, let us know how to do it,” said Mayor Ed Murray of his role in helping to find the system a sponsor, a goal he set shortly after taking office.

“For just $8 a day, someone can ride a bicycle,” Murray said. “There is an equity issue here.”

Brad Tilden, CEO of Alaska Airlines, was excited to see so many people attend the launch celebration.

“This is a lot more people to show than we get to show up when we announce a new route or even a new order from Boeing,” he said.

“Alaska Airlines is proud to help people get out of their cars and enjoy what our great city has to offer in a more personal and healthy way,” said Tilden in a press release.

Pronto! is funded in part by government grants and part by private sponsorships. The rest of the operating budget will be made up from user fees. Other sponsors include Seattle Children’s, Group Health, Vulcan, REI, Fred Hutchison and Spectrum Development Solutions.

It will cost $8 for a 24-hour membership, $16 for three days or $85 for a year. Every station will also have a helmet-vending kiosk where users can rent or buy helmets (rentals cost $2). Here’s a photo of a pricing card: 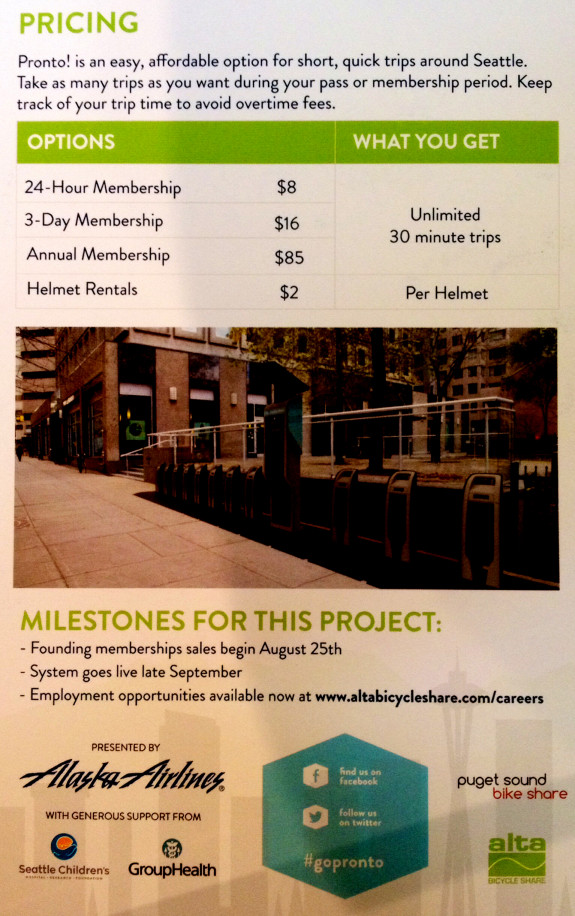 The next big community outreach step is to figure out where exactly the stations will be located. You can get involved by attending one (or more) of the following workshops, which begin Wednesday:

UPDATE: Pronto Cycle Share will utilize different bikes than the other Alta Bicycle Share systems around the nation, including CitiBike in New York and Capital Bikeshare in DC. The company that supplied those bikes declared bankruptcy earlier this year before Pronto made any business deals with them (good job, Pronto staff, on dodging that bullet).

So instead of using PBSC as a supplier (the bikes are actually made by Quebec-based Devinci, but PBSC owns the patents), Pronto is going with a custom bike from the French bike maker Arcade. The bike will have the key features expected from the PBSC-supplied bikes, including a small front cargo space, auto-on wheel-generated front and back lights, and seven speeds set at a Seattle-hills-ready gear ratio to help everyday people climb even Capitol Hill. Oh, and fenders (duh).

Seattle is set to be the first city to utilize the new business arrangement between Alta Bicycle Share, 8D Technologies and Arcade.