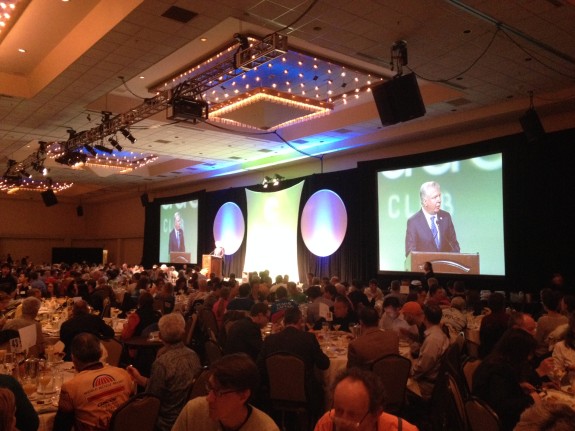 The pilot bike lane project will be built in part with help from the Green Lane Project and will stretch from Pike Place Market to Pioneer Square, the mayor said.

The announcement puts the city on a much faster track to start building its downtown bike lane network than was previously discussed, and the news seemed to surprise even many bike advocacy insiders.

The mayor hinted at the news during a press event Monday announcing Alaska Airlines as the major sponsor for the newly-named Pronto Cycle Share system. When Seattle Times’ Mike Lindblom asked the mayor about whether he was concerned about launching bike share before there are protected bike lanes downtown, Murray said, “I may have something to say on that at the Cascade Bicycle Club breakfast.”

Alaska Airlines CEO Brad Tilden took the Bike to Work Breakfast mic after Mayor Murray and praised the news of the downtown bike lane, which should help the Alaska Airlines-sponsored bike share system.

As we reported recently, Chair of the City Council Transportation Committee Tom Rasmussen said be thought it was “very optimistic” for a protected bike lane to be in place downtown before 2016. That timeline was based on the Center City bike lane plan process, which will come up with a full route plan for a downtown bike networks and significant design work for at least a mile of protected bike lanes.

It’s not yet clear how the 2nd Ave pilot project will interact with the Center City plan, but it could be a chance for the city to get an idea of what a protected bike lane downtown can actually mean for the city. And the design successes and struggles could inform the rest of the plan.

The mayor did not mention design specifics other than to say it will be fully separated from traffic. Stay tuned for more details when we get them.