Downtown Bellevue could be biking laps around downtown Seattle if it wanted to. Not only is downtown Bellevue much flatter than Seattle, the Eastside city’s streets are very wide, which makes them primed and ready to host a network of protected bike lanes.

With the 520 Bridge Trail nearly open (WSDOT will only say “after Thanksgiving”), there is no better time for Bellevue to rethink some downtown streets to take advantage of this major regional connection.

But downtown Bellevue bike lanes are not just about regional travel or the bridge or even people biking, for that matter. Bellevue is growing, and there is a bigger and bigger focus on its downtown as a place for people to live and play. And protected bike lanes are among the most effective ways to make a street more comfortable for everyone, including people walking or eating at a sidewalk café or window shopping. They improve safety for all road users, but they also make streets more lively and comfortable.

That’s why the city’s plans for a pilot protected bike lane are so exciting. Using low-cost materials, city staff will install at least one stretch of mostly-protected bike lane that they can learn from and easily modify. If it goes well, the city can easily make the lane (or lanes) permanent.

This is a very smart approach. Get something in place quickly so people can experience it for themselves.

Staff are already out on the streets gathering feedback on the idea. There will also be an open house 5–7 p.m. November 30 at Bellevue City Hall.

You can learn more and voice your support for the idea (and your favorite option) via an online survey. 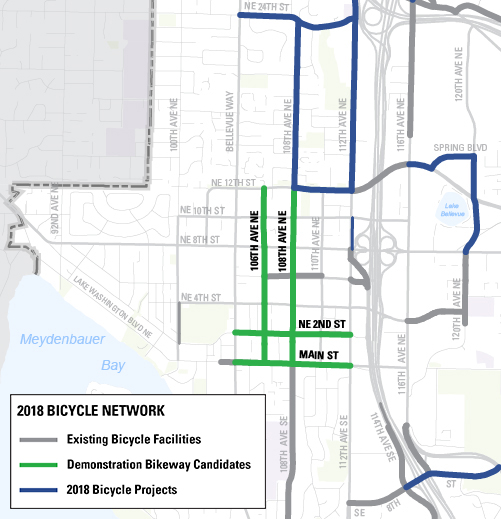 First off, any of these routes would be awesome. And building one north-south and one east-west route would create connectivity to help make the pilot that much more successful. Building two lanes that connect would also avoid a pitfall Seattle feel into when the city opened the 2nd Ave bike lane in 2014 without building any connections. A bike lane without connections can only be so useful.

Cascade Bicycle Club, which is very excited about Bellevue’s pilot bike lane plans, likes 108th Ave NE best. Of the routes in consideration, that’s definitely the most useful connection (though if the Main St lane also crossed I-405, that would be a strong contender, too).

Here’s a comparison of the options: 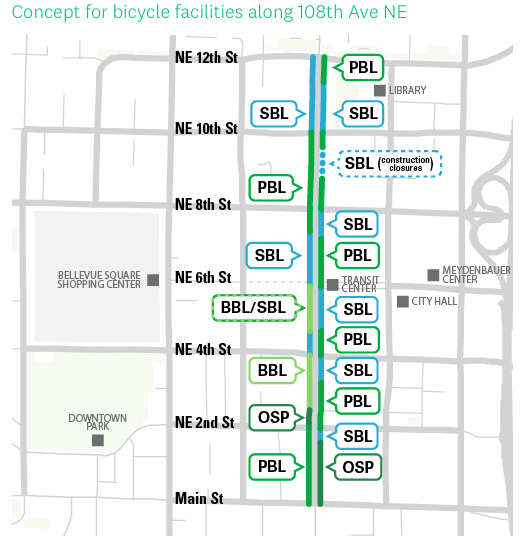 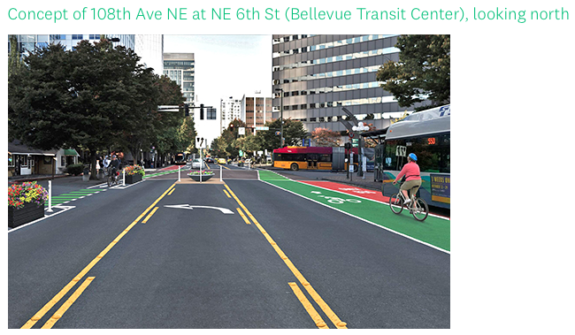 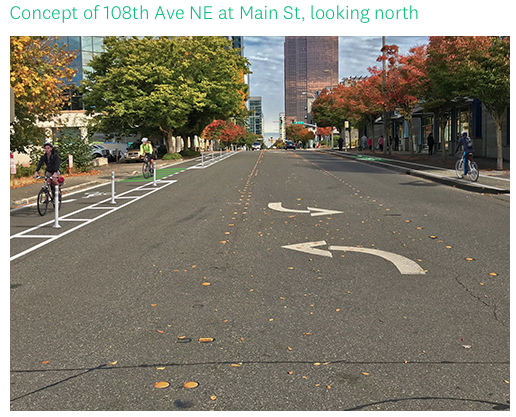 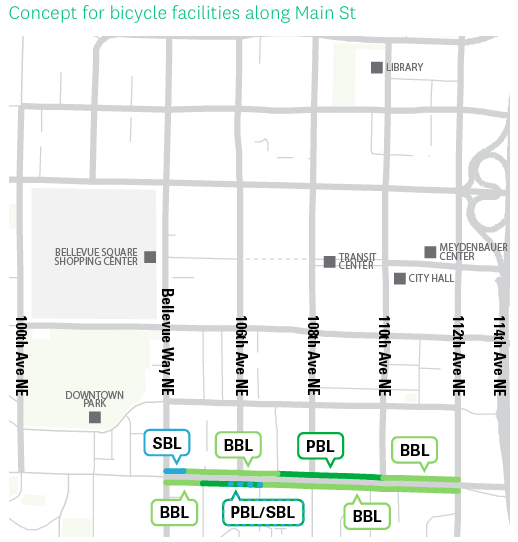 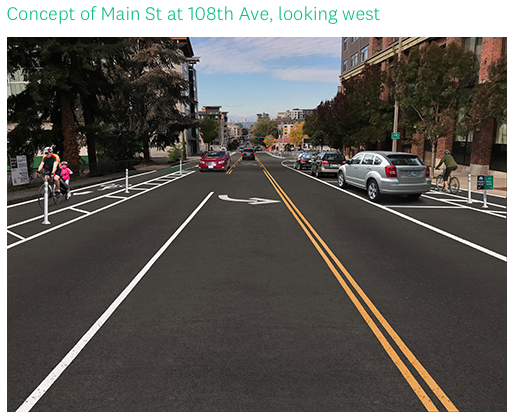 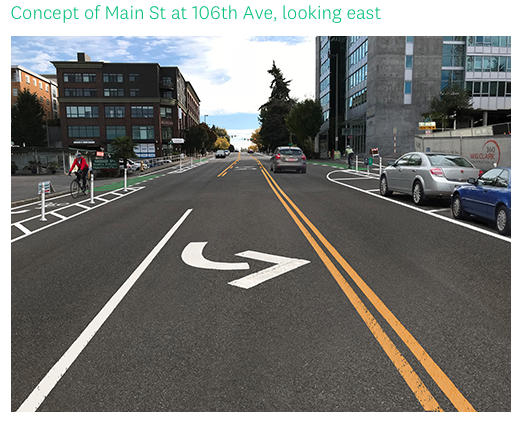 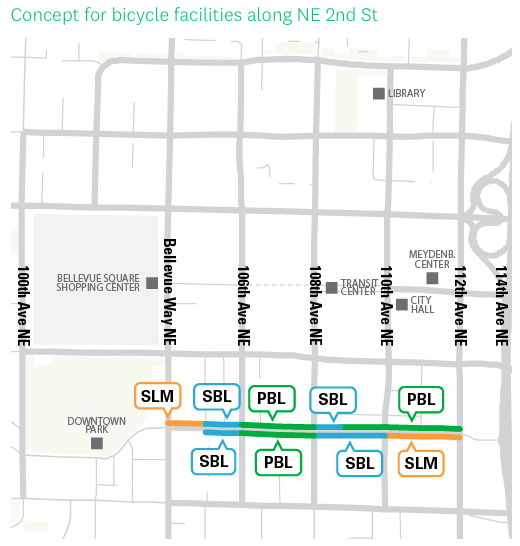 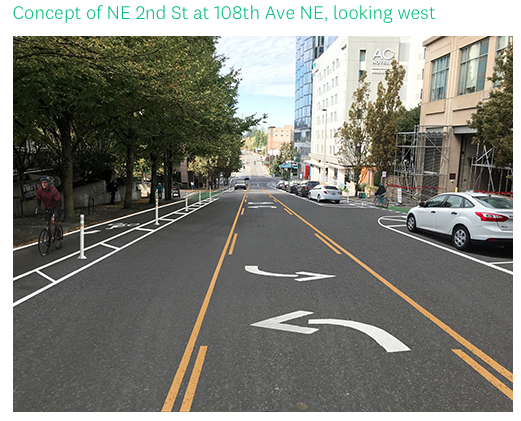 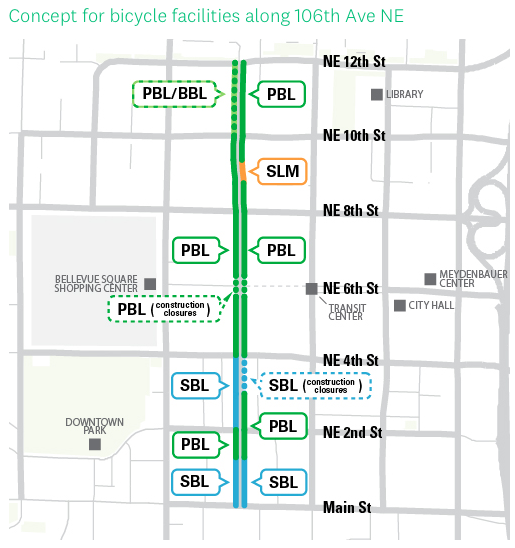 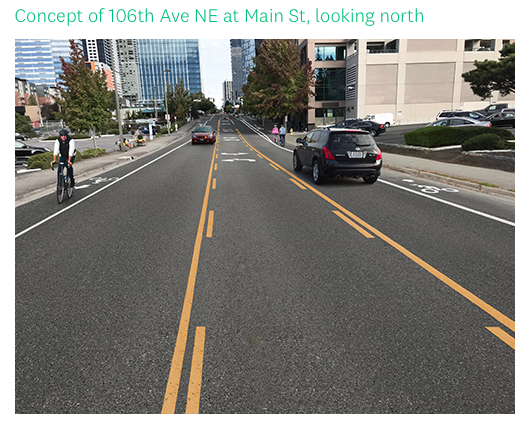 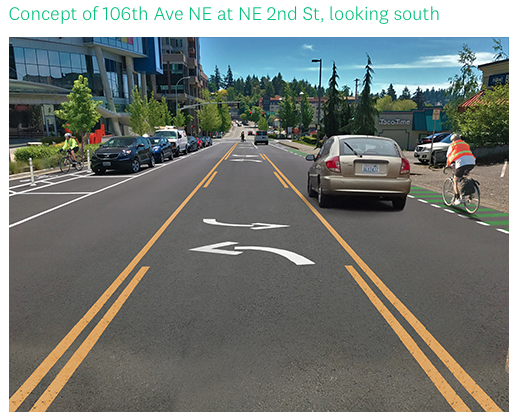