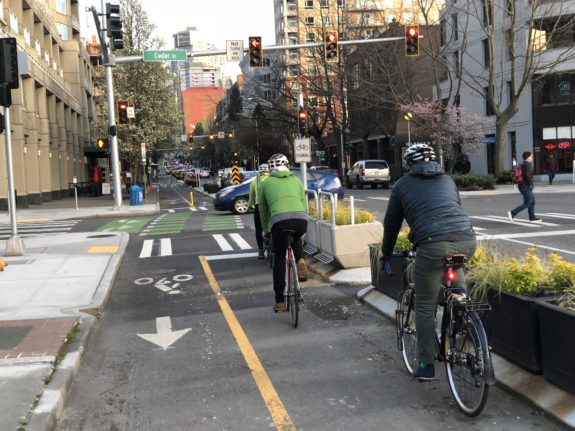 Seattle and Bellevue both turned heads nationally with protected bike lanes that opened this year, making People For Bikes’ list of “America’s 10 Best New Bikeways of 2018.”

Seattle’s entry, the fantastic 2nd Ave bike lane extension in Belltown, made the 2018 list on a technicality: It was a 2017 project that ran overtime and didn’t open until January 2018. But it is really great and worthy of the top spot on the list it won. It shows what the city is capable of when given a serious budget. Every new bike lane does not need to be as fully-featured as this stretch on day one, which comes with both financial and construction time premiums. But it should be the ultimate goal for our bike network to be as functional and complete as this bike lane someday, even if a lower-cost version makes more sense in the near-term.

Congratulations to the SDOT team that made this incredible addition to the downtown bike network happen. You never really got the victory lap and praise you deserved for it. So here it is, a year late. From People For Bikes:

The new bikeway includes three new signals in Belltown, which help people cross 2nd Avenue. There were also upgrades to 11 other signals, concrete planters with foot rests, and raised driveway crossings. All of this made for record ridership in the area this year, with a 34% increase from 2017, and a 380% increase from 2014.

Our top slot was awarded for having full concrete separation in addition to numerous innovative bike-specific structures. We liked that it was built off a successful demonstration project that debuted in 2014, and that lessons learned from the 2014 demonstration led to design revisions and more advanced separation techniques. The success of the demonstration also directly led to the permanent installation, doubling the length of the original project. The corridor provides network connections to three other protected bike lane projects feeding into downtown. This project is an example of progress toward a truly complete network. 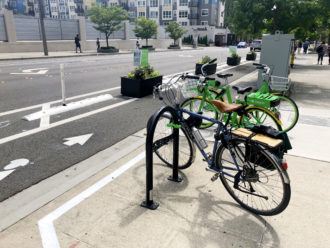 Bellevue’s 108th Ave downtown bike lane demonstration earned an honorable mention on the list. Passing through the heart of downtown and connecting directly to Bellevue Transit Center, the bike lane launched in conjunction with bike share.

A lot of work is still needed to connect Bellevue neighborhoods and homes across the region to the new bike lane, but Bellevue deserves a lot of credit for going after the most difficult part first. It’s a bold and effective test that will hopefully form the backbone of a bike network in coming years.

It’s also worth noting that while Seattle’s mayor has all but failed to build new bike lanes in 2018 (that weren’t scheduled for 2017 like 2nd Ave), Bellevue is putting its westside neighbor to shame. From People For Bikes:

Fifteen miles of bike network was installed citywide in 2018, and the 108th Avenue (Downtown Demonstration Bikeway) was the marquee project. It opened in July, concurrent with the launch of the bikeshare, and closed a 0.8-mile gap through Downtown Bellevue, connecting the I-90 and SR-520 Regional Trails.

Preliminary results show that there’s been an increase of 65% in use of bikeway, with 87% of those surveyed feeling safer and more comfortable. They’ve also measured that auto travel time remains the same.