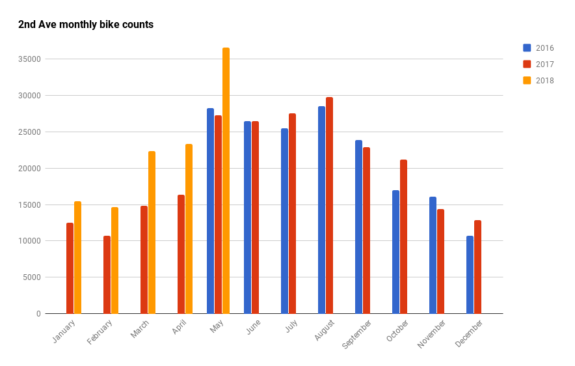 The number of people biking on 2nd Ave in downtown Seattle is up an average of 19 percent year-over-year since the July 2017 launch of private bike share services. And the trend appears to have accelerated as SDOT opened a vital extension of the 2nd Ave bike lane through Belltown in January and companies added more shared bikes throughout fall 2017, eventually reaching 10,000 by the end of the year.

So far in 2018, 2nd Ave bike counts are up an astounding 37 percent. These increases are far beyond the expected year-to-year variations due to weather or special events.

Seattle has all these pieces working together right now. All the city needs to do is keep it going. Keep adding more connections to the downtown bike network, and keep working with private companies innovating ways to improve access to bikes. Every time the city makes a new connection, the whole downtown bike network becomes more useful for more trips.

And private bike share companies, operating at no cost to the city, are like adding carbon-free fuel to that fire by dramatically increasing the number of people who can take advantage of these new bike lanes. People across the region no longer need to get their own bikes downtown in order to bike there. In a recent survey, about three of four bike share users reported using the bikes to access transit. The bike network and bike share and working together with transit to move people to and through downtown.

But new bike lane connections that should be under construction right now are delayed, as Mayor Jenny Durkan’s administration has pushed back key bike lanes in the near-term plan to improve mobility downtown by several years. People clearly want to bike downtown, but a single safe street just is not enough.

Without building new connections, biking will only grow by so much. With a possible downtown traffic nightmare looming, Seattle needs to do all it can to give people options other than driving. One extra general purpose lane on 4th Ave will do nothing to help car traffic, but a protected bike lane on 4th Ave would dramatically improve bike access to a very dense corridor of jobs and destinations. Bike lanes are highly efficient, but only if there is a usable network that people can easily access. Seattle’s almost there. This is no time to turn back.

These images were true for 2nd Ave, and they’re true for 4th Ave, too. And Rainier Ave. And Eastlake Ave and Wilson Ave S and 35th Ave NE:

So, is the increase in 2nd Ave biking happening elsewhere in the city? Yes, but not quite to the same extent. 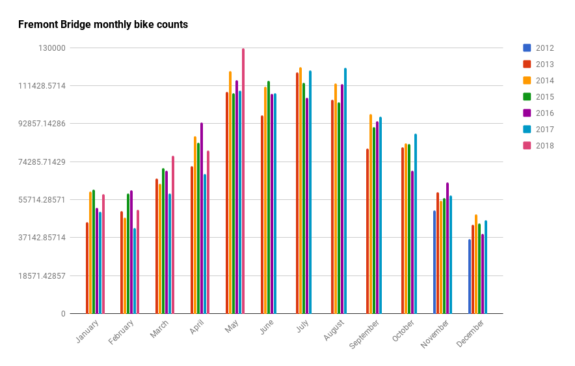 The Fremont Bridge counter absolutely crushed the all-time monthly biking record last month, topping the previous record-holder by eight percent. Year-over-year, biking is up 14 percent since the launch of bike share and up 20 percent so far in 2018.

How much all this can be attributed to bike share is hard to say. Some of it is that 2017 got off to a very slow start, so year-over-year comparisons are a little inflated. But the increase is large enough that it almost certainly points to a cause beyond just weather variation and special events. In fact, some of the big late summer counts happened despite all that nasty wildfire smoke that brought poor air quality to the city for an extended period of time.

Bike share companies combined did not reach 10,000 bikes on the ground until the dead of winter, so we are just now seeing the power of a decently-established bike share system during warm weather months when biking typically balloons. And it’s beautiful.

As the city looks to update its bike share permit, we should be focusing on how to improve and grow the benefits of these bike services. Because their success at increasing the number of trips by bike would also be the city’s success at a time when Seattle needs such a mode shift the most. Private bike share is like sustainable and efficient transportation manna falling from heaven, but the city needs to build more bike lanes to catch it.