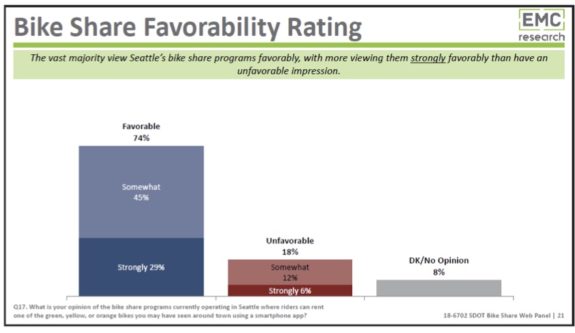 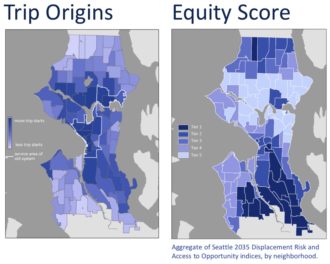 From a June 5 presentation to the City Council Transportation Committee (PDF).

The $1 Spin, Lime and ofo bikes around Seattle are very popular, appeal to wide demographics and are very often used to access transit. These are some of the findings from Seattle’s bike share permit pilot, setting the stage for the creation of a permanent permit scheme in June that could go into effect by the end of July.

I would love to believe the results are accurate, but the more I ran the numbers, the more I suspected the survey sample over-represents bike share users. So while it is safe to say an impressive number of Seattleites ride bike share, I suspect the survey’s estimates are a bit high. So keep that in mind when you digest the results. See the footnote* below for more about the survey discrepancies.

“Regardless of their own interest in becoming bike share users,” according the EMC report, “Seattleites recognize the positive impacts to the broader community of having bike sharing (e.g. environmental benefits and reduced traffic), as well as the benefits to users themselves.”

But beyond just public opinion, the bikes are getting a lot of new people riding. Survey results estimate that one third of Seattle adults had already given them a try as of February when the survey was conducted. Another third said they were interested in trying them. If that figure is accurate*, that’s more than 196,000 Seattle adults riding bike share with another 196,000 potential adult users, and that doesn’t even count all the teenagers, tourists and regional riders who live outside the city limits. And that survey was taken before the introduction of e-assist bikes and the recent record-breaking numbers on the city’s bike counters, which include even more new bike share riders.

The bike share permit pilot has been an astounding success for Seattle, which has led the nation in redefining the role of bike share in a major city. 10,000 bikes are currently permitted in Seattle, and they have already changed the way many people in Seattle get around. The city should be proud of this achievement and looking for ways to build on it and continue to innovate.

Seventy-five percent of bike share users report using the bikes to access transit, further confirmation that bike share is a complement to transit service by closing the notoriously difficult “last mile” problem for transit services. Buses, trains and ferries are very good at getting a lot of people across the bulk of a metro area, but they are not great at getting people from door to door. Bike share is perfect for cutting down on long walks to the bus stop or for skipping a local bus connection by biking directly to an express route stop or station. Quite often, combing bike share and transit is the fastest way to get around. It’s also fun, healthy and environmentally friendly.

Undoubtedly, many trips have shifted away from personal and for-hire cars to bikes and transit. Seattle should be proud of this achievement and look for ways to keep building on this success to shift even more trips and invite even more transportation innovation.

Some demographic highlights from the survey as notes in an SDOT presentation to the City Council Transportation Committee:

If accurate,* these figures are pretty remarkable. One of the big questions about dockless bike share was whether it could better reach a more diverse ridership than many of the nation’s station-based systems. And this survey suggests that race has little impact on whether someone will use one of the bikes. If anything, Hispanic and African American residents are slightly more likely to try one than white residents (though white residents are slightly more likely to use them often): 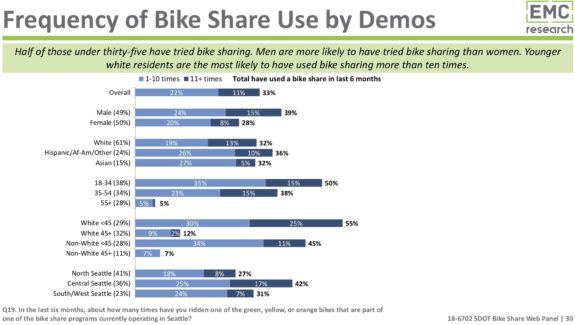 Diving deeper into the survey results, there is a generational divide around the bikes. Though all three adult age brackets like the bikes, the 55+ set was much less likely to use them and far more likely to view them unfavorably: 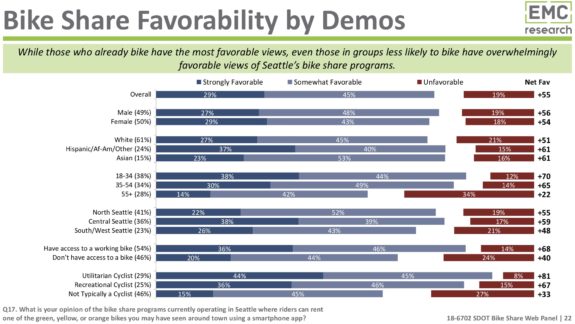 I am especially curious to see how the introduction of e-assist bikes will affect the generational divide. Anecdotally, I see many more seniors on the Lime-E bikes, which are easier on the joints and require less physical endurance to scale hills. I look forward to seeing if data confirms this observation.

Though the survey found that Seattle residents largely favor the bike share scheme, the vast majority (85 percent) of people who called or emailed SDOT staff about the bikes were unfavorable. And that makes sense. Of course people who are compelled to call the city are more likely to be upset about something. When is the last time you called city staff to tell them you really like something they did? Well, come to think of it, maybe you should do that sometime. It might make a city staffer’s day.

The biggest complaint is that bikes are parked in the way, and this concern is especially potent for people with mobility or vision impairments. A survey of bikes found that only four percent of bikes were parked in a way that fully impeded a pathway. 70 percent were parked correctly and the rest were technically parked improperly but were not causing a serious pathway blockage. But four percent of 10,000 bikes is still a significant number of walkway blockages. The city, companies and users need to work together to keep walkways clear.

“We also see some capacity for this to be in the street, essentially looking like a bike parking corral SDOT already builds,” said SDOT Bike Share Program Manager Joel Miller during the presentation to the City Council Transportation Committee. And if they are positioned close to an intersection, they can also act as a crosswalk improvement by improving visibility and making the crossing distance shorter.

And though 76 percent of observed users were not wearing a helmet, an preliminary UW/Harborview study saw no increase in head injury risk from the bikes, according to the SDOT presentation. There were only five collisions involving people on bike share bikes that SDOT staff could find, and none resulted in serious injury.

One odd finding from the EMC survey: Only 37 percent of people know that the current bike share systems are funded by private companies. 27 percent think the city is funding it. More Seattleites need to read Seattle Bike Blog. 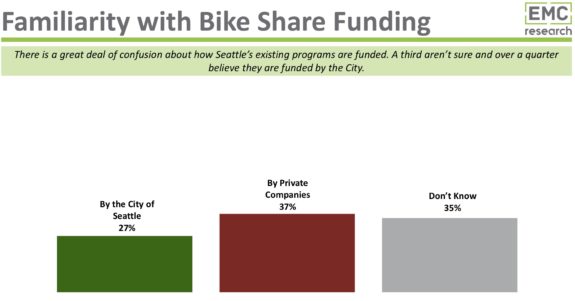 Going forward, the city will release the full bike share pilot report and present the updated permit to the Transportation Committee June 19, and that could pass full Council approval June 25. SDOT would then roll out the new permit by the end of July.

* The survey says 11 percent of Seattleites rode the bikes 11 times or more in the six months before taking the February survey. If that were true, that share of rides alone would be at the very least 742,000 rides (614,000 Seattle adults * .11 * 11) , well more than the 468,000 total rides counted during the nearly six months of the pilot (mid-July through December). That just doesn’t add up. The survey was a “recruit-only” web panel survey of 601 residents, and results were weighted to closely match Seattle’s demographics. It is more scientific than an opt-in web survey, and respondents did not know the survey topic before agreeing to participate. That said, researchers note that any web survey will underrepresent people who do not have good access to the Internet. EMC Research says that if the sample were representative, it would have a margin of error comparable to +/- 4 percent. But my back of the envelope math suggests the margin in this survey is quite a bit larger than that. It may be that people who take web panel surveys are more likely to be tech savvy and, therefore, more likely to take bike share than the general population. Or perhaps the survey takers overestimated how often they used them. Or perhaps the city’s trip counts are low. I have asked EMC about the discrepancy. You can read more about the methodology in the beginning of the report (PDF).

UPDATE: Ian Stewart from EMC confirms that this survey shouldn’t be used to extrapolate ridership numbers. Instead, people should think of it as a sampling of opinions about bike share from a set of residents mirroring (but not statistically representative of) city demographics. From Stewart:

While we made every effort to get a sample that looked representative and got a diverse set of respondents that demographically mirror the city, since not all Seattle residents have an equal probability of being selected for the survey, these numbers shouldn’t be used to extrapolate usership numbers. That would’ve required a different methodology, but given that SDOT has other sources of info on actual ridership that don’t rely on self-report, we were focused primarily on an approach that would get us good data on attitudes about the program (among both those who report not having used the program as well as those who say they have) within a set budget. Additionally, given that we used a non-probability sample, we also can’t strictly apply the classical margin of error; it is possible that since this is web, and smartphones are generally the way you get access to bikeshares, there could be a small bias in the sample towards that audience.

Furthermore, when it comes to usage and frequency numbers, people tend to overreport behaviors and not be 100% accurate when they’re recalling things like how many times they’ve done something in a set timeframe. So when comparing self-reports to actual ridership data, we’d expect numbers to be higher even if we’d used a methodology that captured a true probability sample.

Founder and Editor of Seattle Bike Blog.
View all posts by Tom Fucoloro →
This entry was posted in news and tagged bike share, limebike, ofo, sdot, spin. Bookmark the permalink.