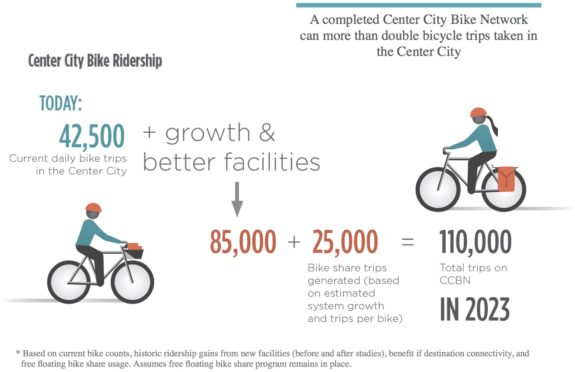 From a One Center City presentation. These bike trips will only happen if the city invests in a safe and connected bike network.

Downtown Seattle is facing a massive transportation challenge when buses are kicked out the transit tunnel in 2019. That is not long from now, and the City of Seattle and our region’s transportation agencies need to be taking action right now to keep everyone moving.

Light rail service to Northgate begins in 2021, which will be a great opportunity to restructure transit service into downtown and increase light rail frequency and capacity. But until then, the fate of transportation downtown relies on bold action to prioritize transit, walking and biking. Because if more people start driving, we’re all screwed. Traffic will be worse, busses will get stuck, air quality will degrade, etc.

But we don’t need to just sit back and allow this happen. We can make a choice as a city and region to invest in bold changes to city streets that create more space for reliable bus movements, improve safety for people walking and provide safe and connected bike lanes that make biking downtown an appealing choice for the huge number of people in our region who would love to bike but would never even consider biking mixed with downtown traffic.

Both Cascade Bicycle Club and Seattle Neighborhood Greenways have sounded the alarm, saying that it’s time to act. You can use their handy online forms to tell city and regional transportation leaders agencies you support plans for a 4th Ave bike lane and the many other safety and transit improvements downtown.

These plans are already in our hands. The One Center City effort, led by SDOT, King County Metro, Sound Transit and the Downtown Seattle Association, has developed a set of near-term actions to help meet the region’s transportation needs during this upcoming transportation crunch. But since releasing a set of near-term ideas, it’s pretty much been crickets. Now that the weather is entering the best phase for road work projects, any work that’s going to get done this summer needs to be moving forward.

Part of that plan is to build key sections of the downtown Basic Bike Network, a set of connected bike lanes that form a basic-but-functional network that people who don’t want to mix with traffic (most people) can use to get around comfortably and safely. One key opportunity is 4th Ave, which would be a vital complement to the existing 2nd Ave bike lane by serving the uphill part of downtown and all the jobs, public institutions, retail destinations and transportation connections there. But since announcing the plan for 4th Ave in September, there seems to have been little movement to make it happen.

Meanwhile, bike share companies have provided manna from heaven for downtown bike lane projects. There are now thousands of $1 bikes spread all over the city and the downtown core that people can use to get around. This frees the city to make investments in bike infrastructure that is immediately accessible to far more people. People no longer need to bike all the way from home or bring your bike on transit to make use of downtown bike lanes. The 2nd Ave bike lane downtown has already seen a significant uptick year-over-year, and there’s little doubt that the availability of bike share bikes is helping:

A five-month average shows a 17 percent increase in 2nd Ave bike lane use over the previous year, a trend that appears to be accelerating as the bike connection grows (the bike lane was extended to the north) and bike share expands. This combination is working.

And this is exactly the kind of mode shift downtown needs to continue if the city is going to meet the unique challenges of the next couple years. Connecting to and through major areas of downtown and out to neighborhood bike routes would unlock a wave of potential bike trips that are just waiting for a route that is safe and appealing.

The downtown bike network was delayed in 2016 pending the One Center City plan. Those delays drew protests at City Hall under the rallying cry “We Can’t Wait.” Now that we have that plan, there are officially no more excuses for delays.

There will never be a better time to build the downtown bike network than right now. This is no time to be timid, and there is nothing to be gained by waiting. The plans are in hand, the bikes are online, the need is imminent and the people are ready.