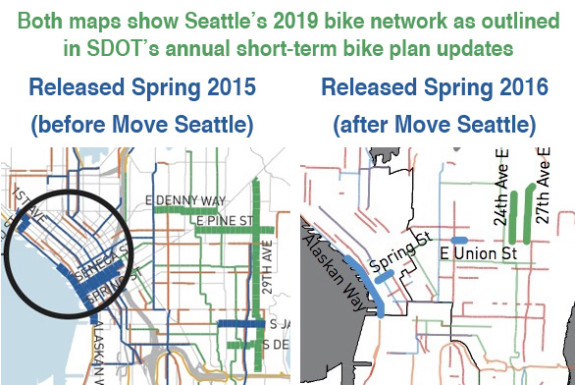 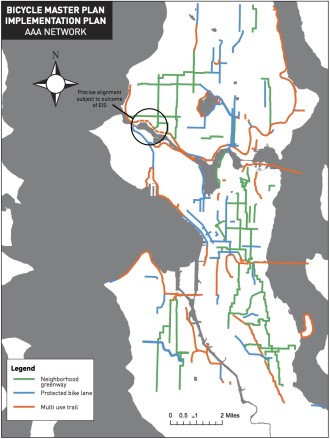 In five years, the city’s network of all ages and abilities bike routes will still be disconnected according to the latest update

With the 2nd Ave protected bike lane pilot demonstrating Seattle’s vision for more ambitious, safe and comfortable bike routes downtown and beyond, Seattle voters approved an unprecedented transportation levy by a big margin. Mayor Ed Murray, his transportation advisors and the staff at the Seattle Department of Transportation laid out a bold vision, and the people said, “Hell yes.”

So with all this momentum and a fresh voter mandate to make bold safety and bike network improvements in hand, the city’s newest annual update of the short term bike plan (AKA the Bicycle Master Plan Implementation Plan, or the Bike Plan Plan) is baffling.

These are vital public safety projects designed to prevent serious injuries and deaths on our streets, yet the city plans to cut one in three projects from the five-year work plan. If the city hasn’t abandoned its Vision Zero goal — which calls for a specific focus on biking and walking safety — then it has at least made it a much lower priority.

“Through smarter street design, targeted enforcement, and education, we will make our streets even safer for people of all ages and abilities, especially pedestrians and people on bikes, as they’re the most vulnerable to death and injury on our streets,” Mayor Ed Murray wrote in his introduction to the city’s 2015 Vision Zero Plan.

And the city’s improvements are working. If it hadn’t been for the Ride the Ducks tragedy, 2015 would have been the city’s safest year in generations. This is no time to slow down on our safe streets work. Seattle is among the only major US cities with Vision Zero in sight. We have a moral obligation to keep working as hard as we can to get there.

That’s why biking and safe streets advocates in neighborhoods across the city were devastated to see the newest short-term bike plan (PDF). In many neighborhoods, the hard work to organize and push for safety improvements and a connected bike network have literally been wiped from the map.

“We didn’t stand out on 35th Street waving Move Seattle signs for nothing,” said Seattle Bicycle Advisory Board member and West Seattle bike advocate Don Brubeck in a recent Board meeting. Projects long in the works in West Seattle have either been significantly delayed (like the 34th Ave SW neighborhood Greenway, pushed back to 2019) or wiped away completely (like protected bike lanes on Admiral Way).

But as bad as the changes are for West Seattle, Rainier Valley may be the most neglected part of the city. Despite a mention in the plan about the importance of the city’s Race and Social Justice Initiative and equitable distribution of our city’s safety investments, some of our city’s most diverse neighborhoods are set to see the biggest delays and cuts. 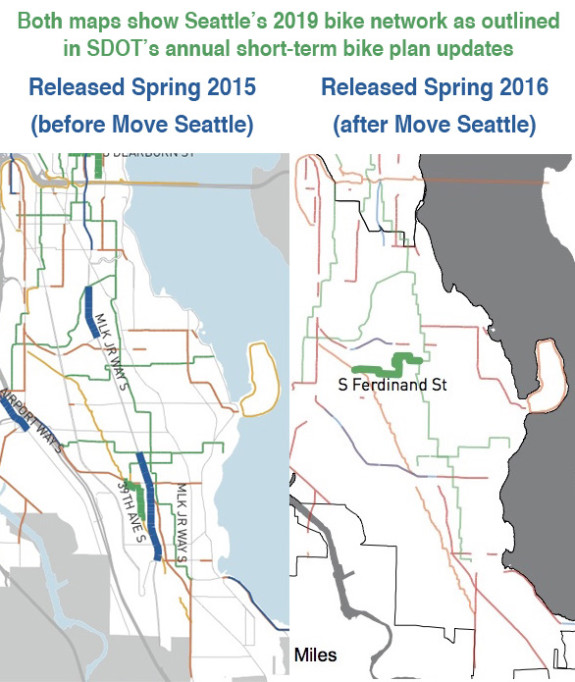 And the biggest pieces missing from the previous Rainier Valley plan are still missing from the update: A direct connection to downtown and safe bike access to Rainier Ave and/or MLK. So five years from now, the city still plans for Rainier Valley’s most direct, flat and dangerous streets to remain that way, and for the neighborhood bike routes to remain cut off from the employment and cultural opportunities in the center city.

Instead, the (delayed) projects Rainier Valley would get are mostly routes that climb up Beacon Hill or up to Leschi. These aren’t all bad ideas, but they aren’t top neighborhood priorities either.

This is not acceptable, it’s not just, and it’s not what Seattle voted for when they passed this levy.

The core of the bike plans’ problems stem from the core of the city: Downtown. SDOT started outreach for the Center City Bike Network, which already has significant grant funding, a year ago. This plan was supposed to designate a connected network of protected bike lanes downtown and begin design work so a functional grid would be in place in 2016.

But after an extremely positive and well-attended open house in the summer of 2015, the city mysteriously put the bike network plan on hold citing a desire to complete a different plan first: The Center City Mobility Plan. We have a Bicycle Master Plan, a Pedestrian Master Plan, a Transit Master Plan, a Vision Zero Plan, and a Freight Master Plan is in the works. We even have a Move Seattle Plan that integrates all these other plans. But apparently we need yet another plan before any downtown bike planning can happen.

So this is where the notorious Seattle Process makes a dimensional shift into a whole new plane of ridiculousness: Because of the Center City Mobility Plan’s arbitrary hold on the Center City Bike Network, SDOT staff had to create the latest short-term bike plan pretending that downtown Seattle does not exist.

Did your head just explode? Mine did. Here’s the Bike Plan Plan’s way of putting it:

Another change since 2015 was the initiation of the Center City Mobility Plan, which will establish a long-term transportation vision, determine the function of each downtown street, and create
an implementation plan. Because of this new planning effort, most downtown bicycle network  recommendations were not included in this
update to the BMP implementation plan. Thus, a comparison of the 2015-2019 and 2016-2020 BMP Implementation Plan bicycle facility project lists will understandably reflect these major changes. Likewise, next year’s Implementation Plan project list may be updated to reflect the downtown bicycle facility recommendations, while other projects may be removed to ensure funding matches implementation.

This is not how transportation planning is supposed to work. Planning a bike network that pretends the city’s largest employment and cultural center — an area densely packed with homes, transit, social services, restaurants and retail — does not exist is among the most ridiculous tasks any transportation staff has ever been asked to complete.

Downtown absolutely exists. I’ve been there. And the streets are dangerous and in desperate need of a connected bike network.

And the problems grow from downtown. Since connectivity is an important factor in project selection, if downtown bike lanes don’t exist, then vital neighborhood connections to those downtown bike lanes don’t rise to the top of the list. It’s a cascading disaster of planning, which is why I suggested on Twitter that the city burn it and try again. Throw this update out the window and follow last year’s update until an actually useful update can be created. And restore the Center City Bike Network right away so we can get some significant connections completed in 2016 as was planned.

The reason for the Center City Mobility Plan (which doesn’t even have a website yet) is that we need to know where buses will run when they are kicked out of the transit tunnel in a couple years to increase light rail frequency. But this is not a sufficient excuse for delaying vital bike safety improvements downtown that we need today. SDOT and city leaders consistently say that safety is their top priority. Well, prove it.

A more reasonable policy would be to instruct bike lane project managers to properly asses transit needs in the bike lane designs as I’m sure they were going to do, anyway. And if there is any question, then the city can construct the bike lane out of paint and plastic posts so it can be easily moved if needed in a few years.

Now is the time to build the downtown bike network and make bold safety improvements in our neighborhoods that need them most. We need our leaders to step up and do what they promised the people who voted for them and their transportation vision. The people have spoken, the funding has been secured and SDOT staff have jumped through every possible hoop by developing many plans and demonstrating the potential with a real life bike lane pilot on 2nd Ave.

Seattle, you’re fresh out of excuses to delay this any further. It’s time to act.

Next year is a mayoral election. Does the mayor really want to delay these projects until he’s running a campaign? And if these projects get delayed even further than that, all the people who worked their asses off to help pass Move Seattle aren’t going to show up to support leaders who dropped the ball.

Below are the maps outlining the planned improvements over the next five years. You can see the full plan in this PDF. Note that possible bike improvements as part of planned multimodal corridor and transit projects (like Eastlake Ave) are not included in these plans, so it’s not a fully complete look. 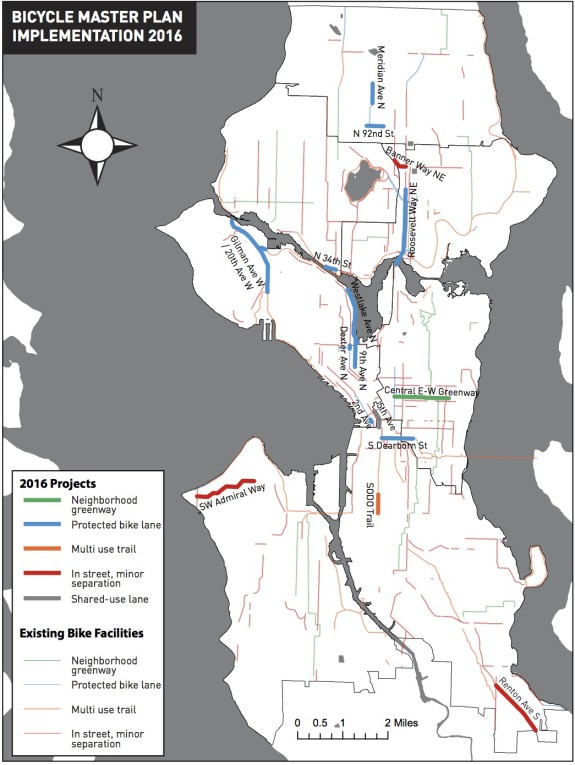 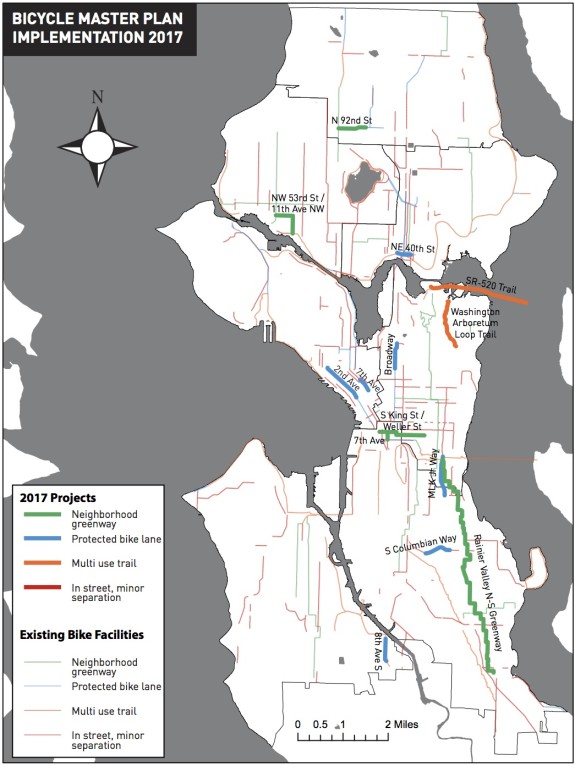 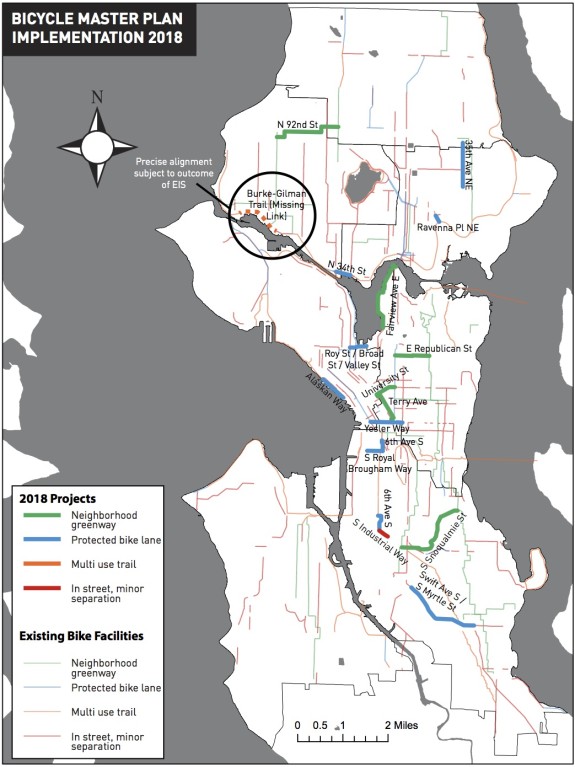 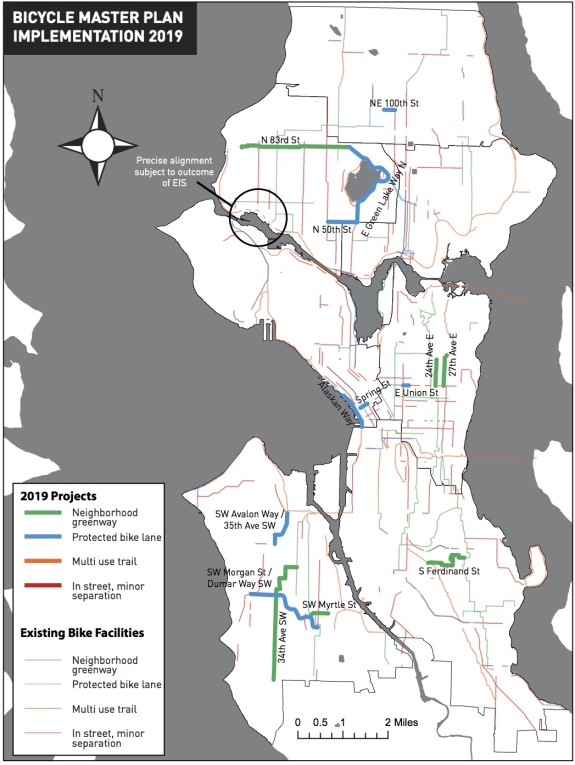 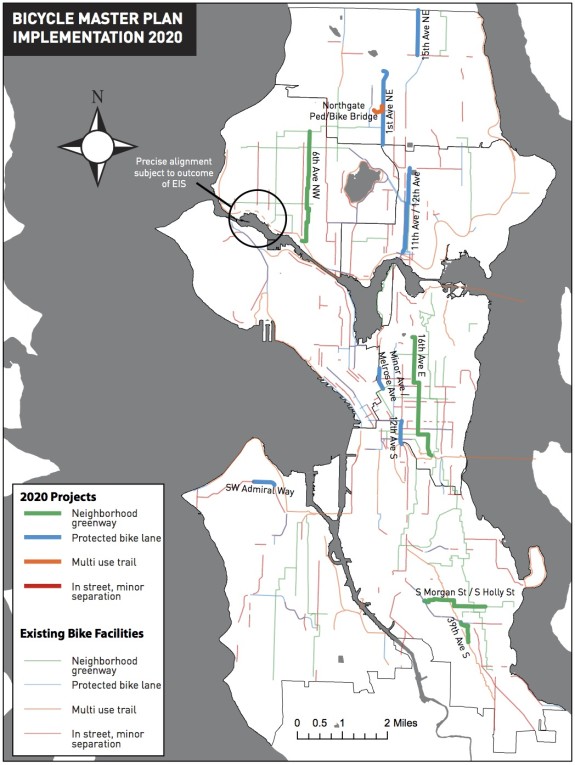