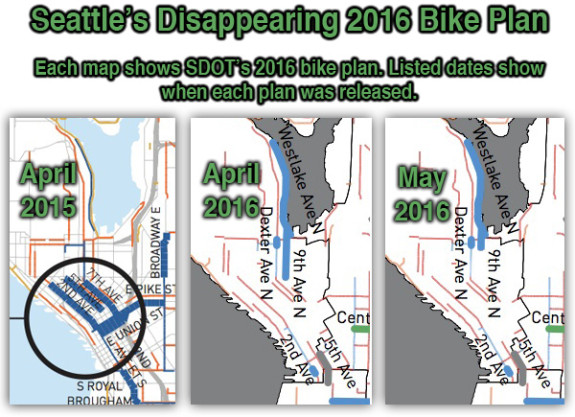 It took only two weeks for Seattle’s Department of Transportation to cut the only significant center city bike lane from their already-scaled-back 2016 plans.

The 9th Ave N bike lane would have connected the new Westlake Ave bikeway (due to open in late July) though South Lake Union and into downtown. For a decade since the city installed injury-causing streetcar tracks on Westlake Ave — the most direct and flat route from the lake to downtown — 9th Ave N has been promised as a major bike route alternative. So bike lanes there in 2016 was the only silver lining when the city made baffling and devastating cuts to the downtown bike plans earlier this year.

But now SDOT says the 9th Ave N bike lanes can’t be installed south of Mercer any earlier than 2018 due to construction (even though construction on a major bike route should be an argument in favor of building safe bike lanes). SDOT staff also said a needed bike connection from 9th Ave N to 2nd Ave via Bell Street can’t be installed until after the SR 99 tunnel highway opens (and who knows when that will be).

So in just one year, the city went from plans to build a grid of bike lanes downtown that connect to neighborhoods north, south and east to plans to build essentially no complete connections until at least 2018.

This change even calls into question Pronto Cycle Share expansion funding. The City Council mandated that bike lanes on 9th Ave N from Westlake to Denny be “on schedule to be completed” before they release funds to expand the bike share system (PDF). This amendment bit off only the lowest hanging fruit in the city’s scaled back bike plan, but now it appears SDOT won’t even meet that goal. 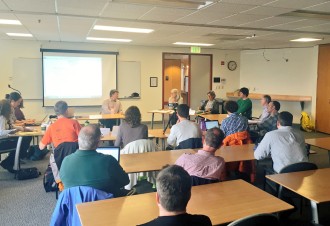 “I work at Perkins Coie, and I was friends with Sher Kung,” said Antoine McNamara during public comment. “Ten days of delay made the difference between life and death for her.”

Kung was killed biking to work in 2014 when someone driving a truck turned into her on 2nd Ave at University Street just ten days before the city’s protected bike lane upgrade was installed.

“It doesn’t feel like [SDOT] is prioritizing what matters,” McNamara said. “The Seattle process can have a real impact on people’s lives.”

SDOT staff were defensive at the meeting, saying that Seattle is way ahead of other cities in terms of bike infrastructure as though people should be happy with what we have.

But people are still getting hurt. And when the city needed to pass a transportation levy, they made promises that the levy would build half the Bike Master Plan, including the protected bike lanes pictured in the first map at the top of this post. They knew then that Seattle’s downtown bike infrastructure (or lack thereof) was inadequate, they just needed the funds to fix it, they said.

So Seattle responded by passing Move Seattle by a wide margin, giving SDOT both the funding and the voter mandate to make these changes. SDOT, the Mayor and other city leaders shouldn’t be surprised that now people expect them to deliver.

Councilmember O’Brien told the Bike Board he still needs to meet with SDOT and find out why the plans are being slashed.

“What I wish I was going to hear from all you is how great the bike plan is going,” he joked to the Board.

O’Brien’s Sustainability and Transportation Committee will discuss the slashed short-term bike plan during its May 17 meeting.

But it shouldn’t take City Council action to get SDOT to do the job the department promised. Some delays are normal for transportation projects, but a near-total deletion of the plan is unprecedented in my years writing this blog.

It’s ultimately up to Mayor Ed Murray to direct SDOT, and he’s either not doing that or is actively impeding their work. So far, the Mayor’s Office has just pointed to creation of a new Center City Mobility Plan as a reason SDOT can’t build any significant downtown bike lane projects (with the single exception of the 2nd Ave extension in Belltown).

But that’s a sorry excuse. We have a Bike Master Plan, a Pedestrian Master Plan, a Transit Master Plan, an in-development Freight Master Plan, a Vision Zero Plan and a Move Seattle Plan that integrates all those other plans. SDOT has smart transportation planners who have demonstrated the ability to install safe bike lanes that don’t impede bus travel.

We don’t need to wait for an entire new plan before doing any work on bike safety downtown. There is always some excuse for why a later date is better than now, but this Mobility Plan excuse is so thin people can see right through it.

It would be better if the Mayor and SDOT make such changes before the May 17 committee meeting so that discussion can be more productive, focusing on what to build first rather than whether to build anything.

Downtown traffic violence is a public health emergency. Streets are still designed with car movement as the top priority even though transit, biking and walking are the most popular and fastest growing ways people get there.

Protected bike lanes are the flashiest part of what are really complete streets upgrades. Bike lanes can make streets safer for people on foot by shortening the effective distance people need to walk to cross the street and by protecting walk signals from turning cars.

What’s most frustrating is that SDOT knows all this better than anyone. The department claims over and over that safety is its top priority, but slashing nearly all significant safety projects from its downtown plans demonstrates the opposite.

Mayor Ed Murray had appeared to be a bold leader on safe, innovative streets when he launched the city’s Vision Zero Plan one year ago, which has an entire section focused on downtown. But now he appears to have abandoned it, falling back on tired Seattle habits of talking a big game but getting little done.

When the Mayor told SDOT to make a 2nd Ave pilot protected bike lane happen, they designed and constructed it in six months. And public reception was great. The project is even highlighted in a new national report “Quick Builds For Better Streets: A New Project Delivery Model For U.S. Cities.”

At an open house nine months after the 2nd Ave lane opened, SDOT asked over 100 people in attendance for feedback on their Center City Bike Plan for a network of such bike lanes, and the main response even then was, “Why is this taking so long?”

There is a transportation revolution waiting for release in Seattle, but the dam of stressful car-clogged streets downtown is holding back a wave of people who would bike downtown if it were safer and more comfortable. A connected network of downtown bike lanes is the solution. We have the plans, and we have the funding. The only missing piece is leadership willing to innovate and lead.

But most importantly, Seattle can’t wait for someone else to die before taking action.