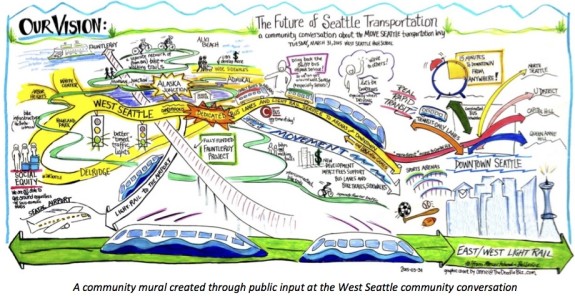 How Seattle does community feedback.

When Seattle created the 2007 Bicycle Master Plan, it was clear that the $365 million Bridging the Gap levy did not include enough funding to keep the plan on track. In fact, the city never even got close to funding that plan at the rate required to reach its goals. By some measures, the city had funded less than half the recommended amount before enough time had passed to renew the plan.

With a new and much better plan in place, the Move Seattle Levy is gearing up to replace Bridging the Gap, which expires at the end of the year. And Mayor Ed Murray claims the revised version he is sending to the City Council includes enough funding to put the 20-year Bike Plan on track to be half completed by the time it turns ten years old.

Murray and his administration announced the revised levy during a press even on Beacon Hill Wednesday. There are no huge surprises and few giant changes from the first version, though there are pretty significant increases in sidewalk and intersection work.

The Mayor’s Office will submit their detailed plan to the City Council very soon, and the Council will then have the chance to make changes before passing a version this summer to send to voters in November.

Here’s a quick rundown of what’s different as far as biking and walking is concerned (see more in this PDF):

The most noticeable decrease was the plan to repave 180 lane miles of busy streets rather than the 250 in the initial version.

The outreach process was pretty extensive, and the city received about 8,500 comments. Below is a brief excerpt of the feedback summary (see it all in this PDF):

When asked to prioritize a list of improvements, the highest ranked were: