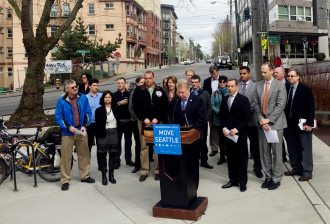 Mayor Ed Murray announced a $900 million transportation levy today, two and a half times as big as the Bridging the Gap levy passed in 2006.

The mayor’s initial draft (PDF) of Move Seattle will now go through a public feedback phase through April. The mayor will then submit his final version to the City Council, who will have until August to submit their version to get it on the ballot for a November vote.

Affordability is one of the primary goals outlined in the draft proposal. How does a tax increase help affordability, you ask? Murray told the crowd and press gathered in front of the Bullitt Center that the plan would invest in “more affordable transportation options” like walking, biking and transit.

“We want to lower the out of pocket expenses for people,” said SDOT Director Scott Kubly, noting that on average 17 percent of people’s expenses go to transportation costs. Being able to get around more affordable is a huge piece to reducing the cost of living in the city.

And thanks to a growing tax base, the increased levy size will be split among more people. So while the levy size will be 147 percent larger than Bridging the Gap, the cost for property owners will only be 112 percent higher ($275/year for median household of $450,000 vs $130/year under Bridging the Gap). The increased funding will also help the city compete for grants that could total an additional $2 billion, according to the Move Seattle draft proposal.

It will be interesting to see how this proposal mixes with citywide conversations about affordable housing, which the Community Housing Caucus called an “emergency” in a recent report.

So what’s this mean for bikes?

“The mode wars are over,” Murray declared at the opening of the press conference. This is a phrase he has used consistently in recent months when he talks about his “integrated” transportation plan.

But of course, there are still a ton of unfriendly streets where people on bikes don’t feel welcome or safe. On a policy level, hostility between transportation modes makes no sense. But on the street level, our roadways can still feel very hostile to anyone outside a car.

Perhaps most notably is what’s not in the plan: Lots of new highway-style roads or big road expansion projects. This is a recognition that we cannot build our way out of Seattle’s car traffic problem, and there’s simply no way to widen our streets much further. If Seattle does not provide its growing population more options to get around, traffic will only get worse for everyone, said Mayor Murray during the press conference.

There’s are some freight projects included, like a pricey rail overpass at S Lander St and a rebuild of E Marginal Way (which, of course, is also on the Bike Plan as a key route to West Seattle and Georgetown). There are also a bunch of transit projects that we won’t get into here.

The plan includes funding for improving sidewalks, curb ramps and crosswalks. There’s also funding for Safe Routes to School that would create at least one safe route to every public school in Seattle (and a bunch of private ones, too). But Murray noted that fulfilling the city’s need for sidewalk work would cost double or triple the amount he is proposing.

The mayor’s proposal claims to complete half of the Bicycle Master Plan. Since it is a nine-year levy, that would theoretically put implementation of the 20-year bike plan on schedule.

More specifically, the levy would fund 50 miles of protected bike lanes (of 102 proposed) and 60 miles of neighborhood greenways (of 239 proposed). It would also include funding to build the Northgate bike/walk bridge and complete the Burke-Gilman Trail Missing Link in Ballard, which are big ticket items. See this post for more details on the projects at the top of the city’s priority list.

The city would also conduct 12 – 15 road safety corridor projects, complete 7 – 10 mutimodal corridor projects and repave 250 lane miles on busy streets. Many of these projects could be opportunities to implement elements outlined in the Bike Master Plan.

Here’s a look at a composite map of these investments: 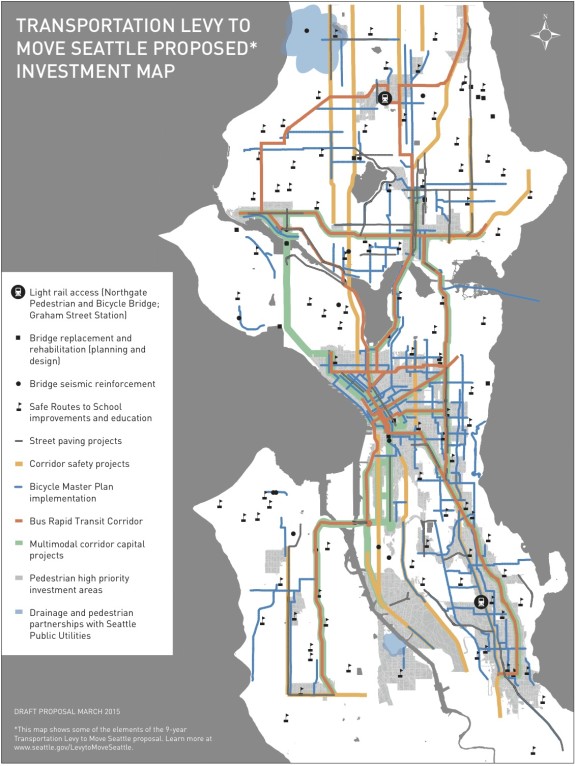 This is a great starting place for a transportation levy. If passed as is, it could provide the funding Seattle needs to remain a leader as a bike-friendly American city.

But it could also be an opportunity to accelerate Bike Plan implementation. With even further investment, we could turn that 20-year plan into a 10- or 15-year plan, a desire that’s been voiced by bike advocates and city leaders ever since it was adopted.

“I want it built out while I can use it,” said City Council Transportation Chair Tom Rasmussen in the spring of 2014. “20 years is a heck of a long time to wait to get it done.”

The final result for bike mobility, comfort and safety is in the details, so the metrics for monitoring success needs to be specific. Do those 50 miles of protected bike lanes include complete bike route connections, including all the costly-yet-vital intersection redesigns? It’s easy to build 50 miles of bike lanes that disappear at every major intersection like most of the city’s bike lanes do currently. Will the multimodal corridor projects include bike lanes where needed and outlined in the Bike Master Plan? Will repaving projects include planned bike lanes and neighborhood greenway crossings?

In other words, will Move Seattle provide enough funding to make sure families and people of all ages and abilities in every Seattle neighborhood feel comfortable walking and biking to get around?

Stay tuned for more reporting as we dive further into the details and as the City Council makes their changes. More details and materials (including a video with a super soothing soundtrack) on the Move Seattle webpage.

If you want to get involved or ask questions, there are a bunch of opportunities listed on the city’s website, including these community meetings: