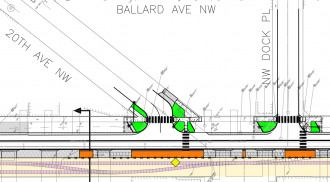 If the Ballard Missing Link of the Burke-Gilman Trail were a person born when the city first passed a plan build it, today it could legally go buy a drink.

The tale of the Missing Link is really more of a saga. Well, except that instead of exciting adventure, this saga is full of legal battles, stall tactics and enough studies and documents to easily pave the 1.5 miles of trail. But there is a (mostly) fake train company, which is at least somewhat creative.

This journey was recently laid out in a ridiculously-long timeline put together by Cascade Bicycle Club, which has been active in supporting the city’s legal case to finally complete the trail.

Mayor Ed Murray’s Move Seattle levy includes funding to complete the trail. That makes him the third mayor in a row to budget for this one short section of trail. Yet construction crews are not likely to start working for two years if things keep on their current course and no new legal challenges increase the delay.

In the meantime, people continue to be injured navigating the area on bikes, even with interim bike safety changes instituted in recent years.

But we’ve been over all this before. The Environmental Impact Statement on the trail is finally supposed to be getting underway after some delays. The Cascade-led community group Connect Ballard is hoping to do what they can to keep the EIS on track and on schedule, according to the Cascade post.

Here’s the timeline. And here’s to hoping it doesn’t get any longer. Cheers, Missing Link:

This entry was posted in news and tagged burke-gilman trail, missing link. Bookmark the permalink.