After somehow spending a year and a half to “finish analyzing the feedback from the EIS scoping process held in late 2013,” the city is holding an open house to present the plan to develop a study of options to finally complete the Ballard Missing Link of the Burke-Gilman Trail. The draft of that study won’t be out until 2016.

In the meantime, the city had to return a $1 million Federal Highway Administration grant and a $500,000 WA State Safe Routes to School Grant it had won for the Missing Link due to lack of progress on the project. The cost of the completely absurd amount of delay on this trail boggles the mind. What’s even more maddening is that 98.6 percent of people who responded to the 2013 outreach process voiced support for completing the trail. No, I didn’t typo that number. More on that below.

The open house is 6–8 p.m. June 18 at Ballard High School. More details from an event flier: 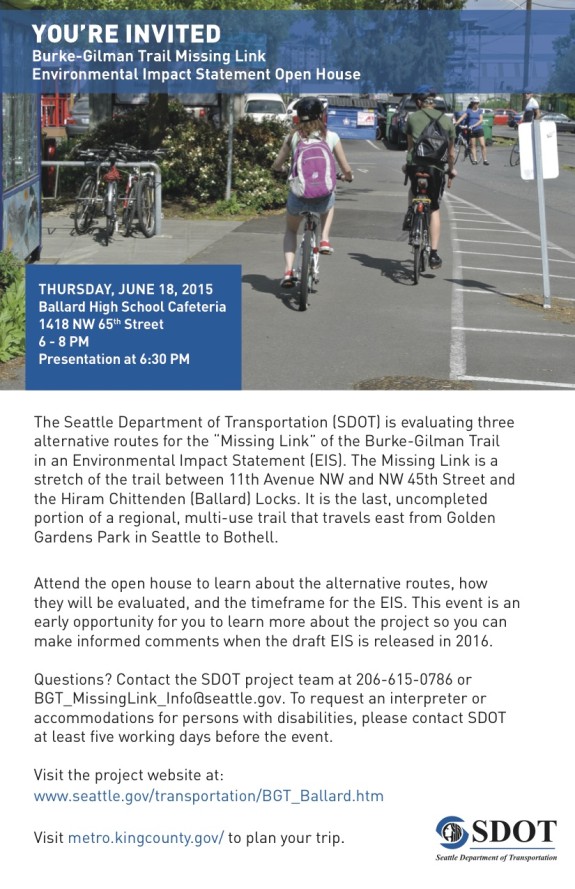 The most unnecessary study in Seattle history

I dare you to find an issue where 98.6 percent of engaged Seattle residents agree. Do not be fooled, there is no actual debate about whether we should or should not complete the Ballard Missing Link. Out of 1,122 letters received during the “EIS scoping” phase in 2013, all but 16 letters supported completing the trail (PDF).

In fact, there’s not even a debate over where the trail should go. It’s overwhelming: People want it to follow the path of least resistance along the train alignment next to Shilshole Ave, exactly where the city has planned it for the past 20 years:

And what is the primary goal of the project? No contest: Safety.

But because obstructionist appellants have taken the city’s plan to court every possible step of the way (at no small cost), we are going to spend a bunch of money studying three alternatives for the trail in great detail. What a waste of everyone’s time and money. This is the public process run completely off the tracks. In fact, this has to be the most egregious misuse of the environmental impact process in Seattle history.

At this point, we could have just taken the cash we’ve spent, ground it up, mixed in some cement and paved the whole trail with it (remember, mix two parts crushed currency, one part cement).

But seriously, this is embarrassing, Seattle. It should be especially embarrassing for the Ballard Business Appellants, including Salmon Bay Sand and Gravel, the Ballard Chamber of Commerce and Ballard Oil. Unless they are proud of wasting so much money fighting something that has 98.6 percent support.

And every day that goes by without a fix more people are injured trying to connect the abrupt ends of the trail or trying to access the Ballard business district. These are real people, breaking real bones and scraping real skin. This isn’t a game. This trail should have been fixed by now. People are getting hurt for no reason.

Somebody please end this madness. Don’t make us do this whole study and waste another year (at least). It would be much better to spend this money and time finalizing details on a trail design that addresses business concerns so we can finally build a safe, connected trail that works for everyone.