The city has built stretches of neighborhood greenways in Ballard, Northeast Seattle, the Central District, Delridge, Beacon Hill, Wallingford, Olympic Hills, the University District and Greenwood, but they are all sort of floating in space with limited usability because they lack connections.

While one strategy for creating a quality neighborhood greenway network would be to create a lot of connected routes in one part of town and grow outwards from there, Seattle decided to start separate networks in many parts of the city. This means the initial building of greenways has been a little underwhelming. But it also means that the groundwork has been laid to finally start making a lot of high quality connections fairly quickly.

For the first time, two neighborhood greenways will cross each other once the 17th Ave NW route is completed in Ballard this fall. The route will stretch from Soundview Playfield near Whitman Middle School to the Ballard business center, crossing the NW 58th Street neighborhood greenway on the way.

So, for example, once complete you’ll be able to bike or walk 2.7 miles from West Woodland Elementary to Whitman Middle School only using neighborhood greenways. The number of homes and destinations within range of the Ballard Neighborhood Greenway network will increase dramatically.

Unfortunately, the connection to the Burke-Gilman Trail may remain awkward and possibly dangerous due to the neverending legal wrangling over the Missing Link. If that trail had been completed by now, this greenway project could easily connect to it, activating the Ballard network. But instead, that connection remains elusive. The project fact sheet notes, “Later in 2015, we will study how best to connect the neighborhood greenway to the Ballard Bridge and bike lanes on NW 45th Street.”

The design details include one traffic maintainer (AKA “diverter”) at NW 57th Street to prevent cut-through car traffic on 17th Ave NW. There is an existing similar maintainer on the NW 58th Street greenway at 15th Ave NW, and hopefully the two of them combined will mean low traffic volumes where the greenway routes intersect. The new maintainer will look vaguely like this: 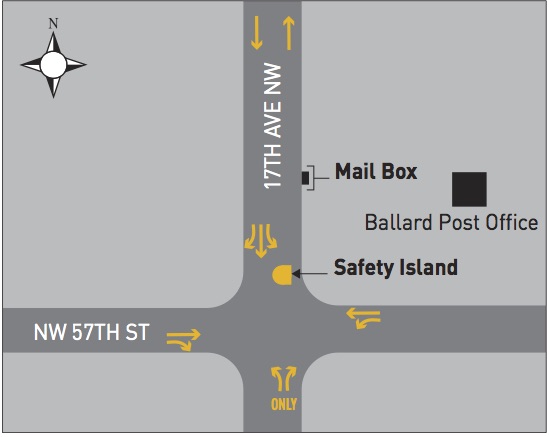 For more details, see the project website and this project factsheet (PDF).

For a look at how the city’s neighborhood greenways will quickly start turning into networks, here’s the city’s workplan as of October: 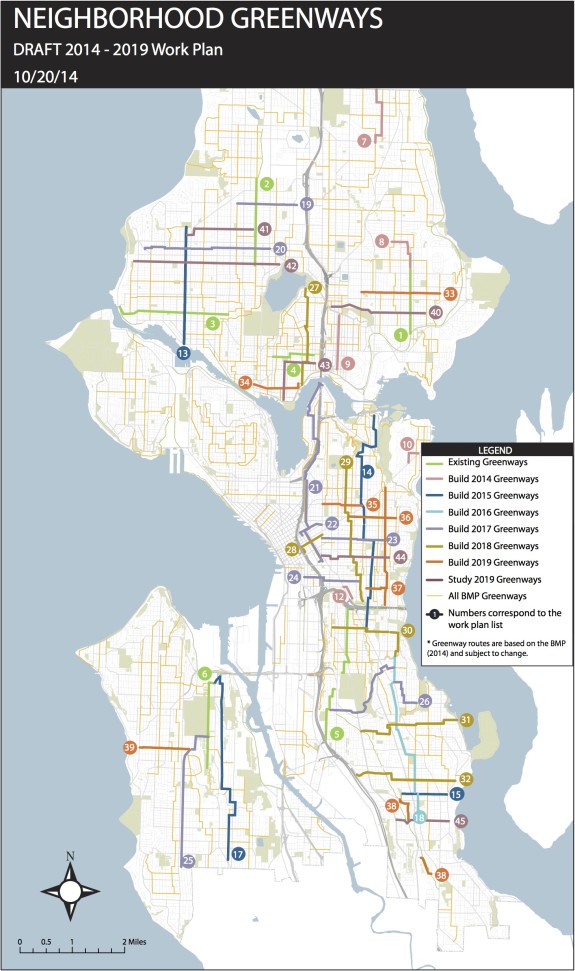 27 Responses to For first time, two neighborhood greenways will connect later this year