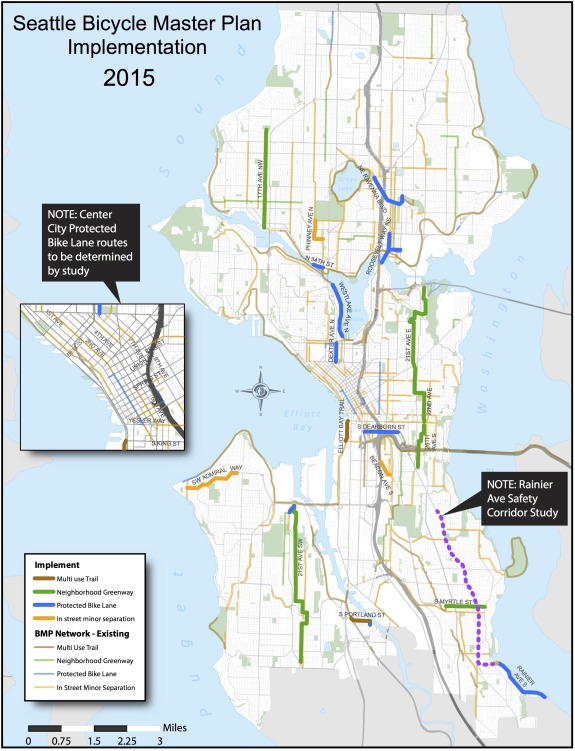 So, Seattle passed a 20-year Bike Master Plan. Now what?

Well, SDOT planners need to figure out which projects rise to the top of the priority list. The city has released its delayed Bike Master Plan Implementation Plan (AKA the Bike Plan Plan). This document runs the Master Plan through a prioritization framework that weighs segments based on these criteria:

However, the biggest limit to implementing the plan is, of course, funding. And with the Bridging the Gap property tax levy scheduled to expire at the end of 2015, the Bike Plan Plan has to assume that there will not be a new source of transportation funding to replace or expand on it. So the budget lines (and, therefore, bike facility miles) for 2016 through 2019 are very underwhelming. 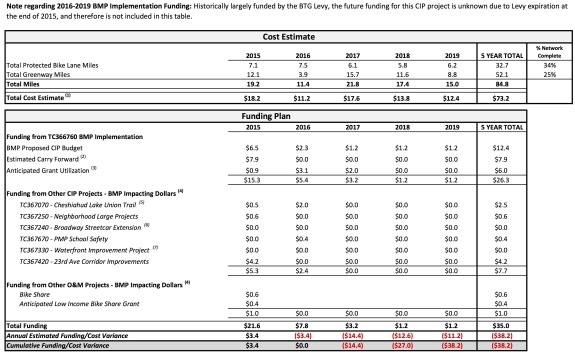 You will be hearing a lot about city efforts to replace Bridging the Gap over the next year, so stay tuned and get ready to get involved. It’s not clear what exactly that funding measure will look like, but it’s a great chance to make the bold investments in the Bike Plan that the city needs.

Funding aside, there are some peculiar outcomes from the prioritization process. For example, a North Rainier Ave protected bike lane (connecting Rainier Valley neighborhoods to the city center) does not make the cut over the next five years. Neither does the Ballard Bridge. Some lower priority projects make the list largely because other work (like a repaving project) provides the opportunity to leverage funds and get it done sooner.

But the plan does present a bold list of projects for 2015, including protected bike lanes on Dearborn Street, the south end or Rainier Ave and on Roosevelt from the University Bridge to N 45th in addition to planned neighborhood greenways in West Seattle, Central Seattle, Rainier Valley and Ballard. 2015 will also have a heavy focus on getting design work and plans ready for a big downtown protected bike lane push in 2016.

Here’s what the city’s bike network could look like by the end of 2019 if there are no big changes to the city’s funding capability: 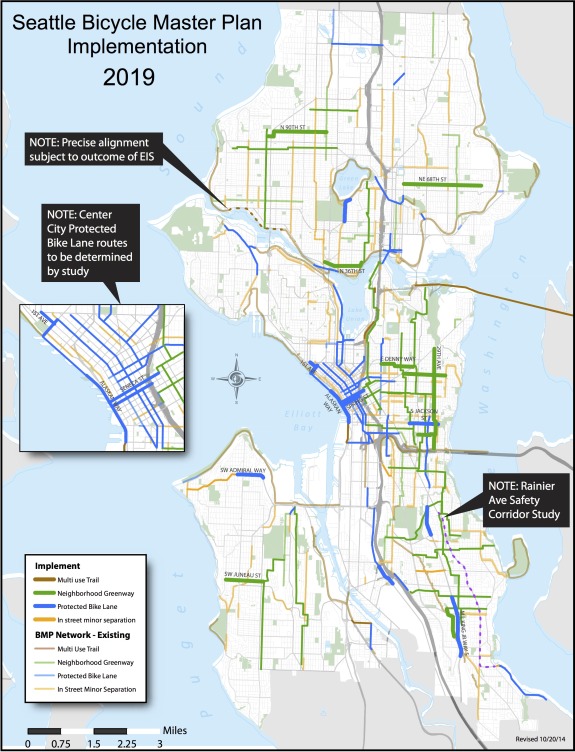 You can check out SDOT’s full Bike Plan Plan below. The City Council would like to hear your thoughts on it, so email [email protected] and, of course, let us know in the comments below.