Seattle Police announced Friday that they have found and impounded the red Chevy Tahoe they believe struck and critically injured a seven-year-old girl at MLK and Genesee Tuesday.

Now they are on the search to find the person behind the wheel who hit her and chose to flee the scene, leaving the child unresponsive in the middle of the street. They are still seeking information, so if you know anything that might help place a person in the driver’s seat you should call detectives at (206) 684-8923.

The child was crossing MLK in the crosswalk on her way to a tutoring session at the Boys and Girls Club with her two sisters when she was struck, KIRO TV reports. Witnesses, who were clearly shaken up by what they had seen, said the person driving did not even slow down before fleeing the scene.

She remains at Harborview. We send her and her family our best wishes. 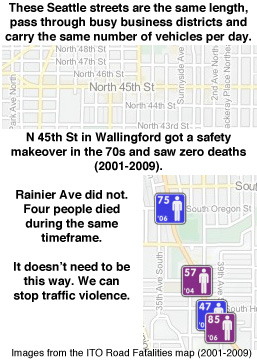 In our original report, we noted that since 2007 there have been six serious collisions involving people walking or biking within a block of where she was struck (seven now, counting Tuesday’s collision). Expand the range to ten blocks and the count climbs to at least 32, according to a map of city data curated by the Seattle Times.

The city was already engaged with residents pushing for a safer Rainier Ave following some scary collisions on the street earlier this year, including two people who drove cars into storefronts in Columbia City. Community members took to the streets to protest the dangerous street and bring awareness to the need for more careful driving. The action led to a community meeting in September to kick-start efforts to improve safety on the street.

Wednesday, less than a day after the hit and run, the city Traffic Engineer Dongho Chang followed-up with neighbors by outlining the schedule for the road safety project on Rainier. The city will work with community members during the fall, winter and spring to develop a safety plan that will be implemented by next summer.

Thank you for attending the September 17th community meeting with SDOT about Rainier Avenue. SDOT will launch a Road Safety Corridor Project on Rainier Avenue South in November 2014. We will work in collaboration with the community to consider changes to Rainier Avenue South in an effort to reduce speeds and collisions to make the roadway safer for all users. Together we will determine the specific nature and design elements of these changes through the process described below:

Phase 1 – Issue Identification Meetings (Feedback Sessions). In November 2014, we will work with Department of Neighborhood to host a series of community engagement meetings. We will share traffic data, listen to community concerns, and develop strategies to lower vehicle speeds and reduce collisions. These meetings will be open to the general public and will be publicized through a variety of channels.

SDOT will define roadway improvement alternatives based on community input and data.

Phase 3 – Design Alternative Review Meetings in February 2015. We will hold a series of community meetings to review proposed design alternatives, potential implementation timeline, and gather feedback from the community.

SDOT will implement in Spring or Summer of 2015

This is great news for Rainier Valley, and a sign that after decades of largely ignoring the problem, the city finally wants to take action. If you’re looking for a way to submit your thoughts, the city has an online survey open for people who could not make the September meeting. You can also get involved with Rainier Valley Greenways, whose next meeting is 6:30 p.m. October 21 at the Bike Works programming space (3715 S. Hudson Ave).