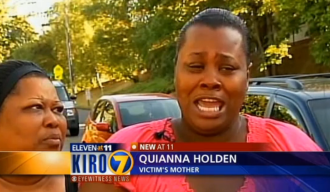 Trevon Crease-Holden and his little brother were walking home from late night open gym hours at the Rainier Community Center when it happened. Trevon is still in a fight for his life after someone driving a grey Honda struck him in a crosswalk at MLK and S Walden St July 19, then fled the scene, leaving the 15-year-old bleeding and critically injured on the side of the street.

Crease-Holden’s family and community are devastated, and Rainier Valley Greenways is helping to organize a community walk and vigil to support him and his family, to call for the person responsible to come forward to give Trevon’s family the answers they deserve, and to call for safer streets for all Rainier Valley residents.

The walk will meet at 5:30 p.m. Monday at the QFC at Rainier and S McClellan St. Joined by Trevon’s mother Quianna Holden and Seattle Mayor Mike McGinn, the group will walk a few blocks to the site of the collision.

The walk will hopefully also bring more attention to a tragedy that, other than a devastating report by KIRO TV’s Frank Field, has not received enough attention in city media.

A family and community are devastated as 15-year-old Trevon Crease-Holden fights for his life with a head injury after being struck by a hit-and-run driver on Friday, July 19.

The Rainier Valley community is gathering on Monday, August 5 at 5:30pm the QFC on Rainier, 2707 Rainier Ave S, and walking four blocks to the site of the tragedy at MLK and South Walden Street. Trevon’s mother, Quianna Holden, Mayor Michael McGinn,  and other community leaders intend to speak at the Walden collision site.

Trevon was on his way home with his little brother from a late night open gym at a local community center when they entered a marked crosswalk at Martin Luther King Jr. Way South and South Walden Street. A vehicle traveling south on MLK struck Trevon and continued without stopping to provide information or render aid.  Seattle Fire Department responded and Seattle Police continue to search for the hit-and-run driver.

Quianna Holden says she can forgive the driver for hitting her son, but she cannot forgive the driver for not coming forward.  She went on KIRO TV to make a heartbreaking plea­ for the person responsible to come forward so she can at least have answers. His mother says Trevon is a good son, and a good athlete who hoped to start football this year at Franklin High School.

Community leaders will walk with us. Please join us to pay your respects and to show your support for Trevon and his family and safe and healthy streets in Seattle!