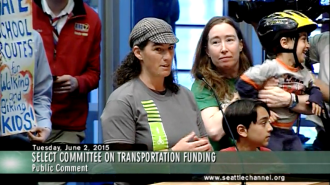 Morgan Scherer of Family Bike Seattle testifies at the hearing. With her: Margaret McCauley and kids

The call for safe streets during Tuesday’s public hearing on the Move Seattle levy was overwhelming. Indeed, as person after person and family after family got up to advocate for safe streets in their neighborhoods, I kept waiting for someone to get up and argue against the safety goals of the Move Seattle plan. But through hours of testimony it basically didn’t happen (watch the whole thing below).

Certainly, a big reason for the overwhelming support for safe streets was organizing efforts by Seattle Neighborhood Greenways and Cascade Bicycle Club. But these were neighbors who volunteer their time to the cause of making the neighborhoods safer and more accessible for people walking and biking. They’re people who believe in the vision of having a city with Safe Routes to School, with priority given to schools with high rates of poverty.

But not only do they believe in this vision, it now feels tantalizingly within reach. That’s why people are so motivated to spend their Tuesday waiting their turn for two minutes at the mic in front of the entire City Council.

The Move Seattle levy would raise $930 million over nine years. This is much bigger than the $365 million Bridging the Gap measure that expires at the end of the year. But the Move Seattle vision is so much more inspiring, and it’s clear that with all the transportation woes in a growing Seattle, Bridging the Gap simply wasn’t big enough or forward-thinking enough to meet our city’s needs.

Doing nothing or just doing more of the same will never get Seattle caught up on it’s maintenance backlog, transit capacity needs and lacking safe walking and biking options.

We have already invested money and countless hours developing visionary plans for walking, biking, transit and (soon) freight. These plans highlight our biggest needs and outline complete and connected routes to get people and goods where they’re going.

The only thing we’re missing is the funding to make them a reality. Move Seattle is the single biggest and most promising source for that funding.

In map version, here’s what some of those Move Seattle investments will look like (many projects not yet totally defined): 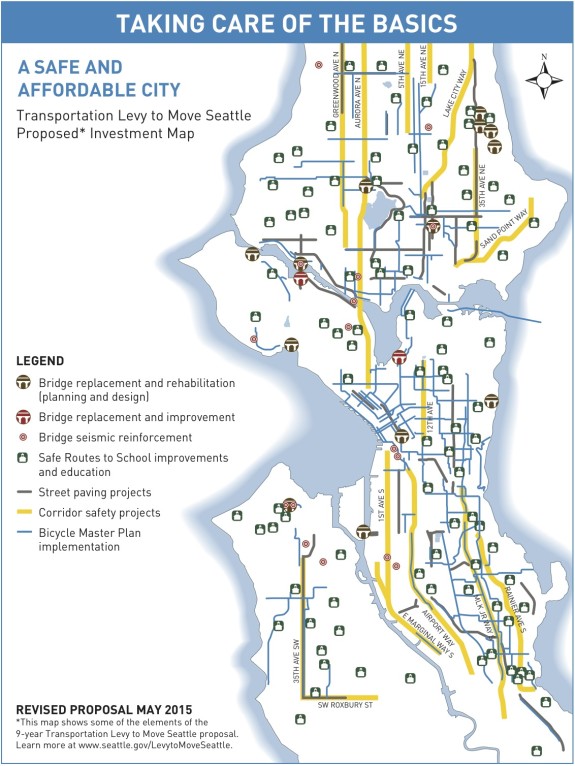 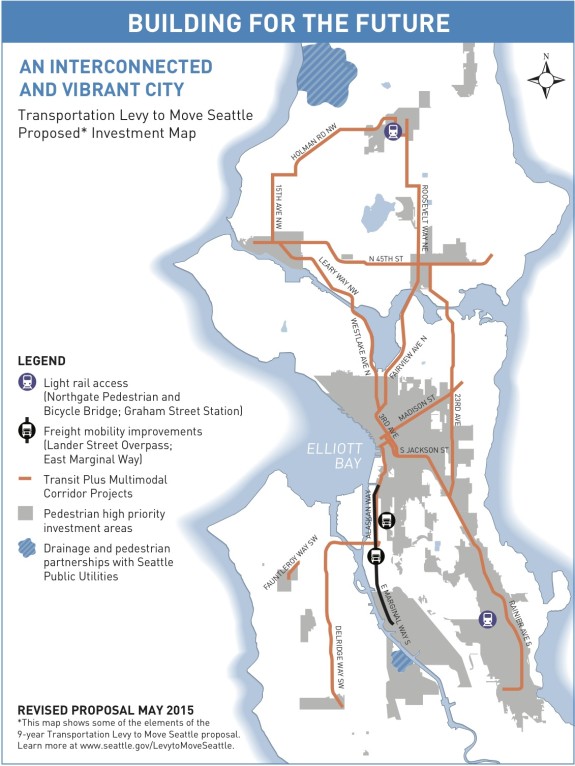 But most importantly, this is about having the resources to actually connect our biking, walking, transit and freight routes. For example, Seattle today has very few high quality bike routes that actually connect to each other.

The 2nd Ave bike lane is great if you can get there. Move Seattle wants to expand that one bike lane into a network of bike lanes downtown that also connect out to neighborhoods. We’ve been building neighborhood greenways for years, but we have yet to build two that actually cross each other. Move Seattle intends to make this happen. Once bike routes connect, usability and utility multiplies. We haven’t really experienced this yet in Seattle, but it has happened every time other cities around the globe connect their high quality bike networks. It will happen here, too.

Move Seattle also includes funding for 150 blocks of new sidewalks and better curb ramps at 750 intersections. Could this make Seattle one of the most ADA accessible big cities in the nation? Not really sure how you would measure that, but this is a big investment in the kinds of projects that help people with mobility issues most. What a wonderful goal for the city to fund.

This plan also includes vital road maintenance money. Those potholes don’t fix themselves, and roads don’t grow back fresh asphalt on their own. Right now, Bridging the Gap provides about 25 percent of the transportation budget, and it’s not enough. We need to preserve that funding, then add some more.

While most of the dollars spent on transportation projects in the area go to highways ($4.6 billion for 520 Bridge expansion, $3.1 billion for the Alaskan Way Viaduct/highway tunnel not counting cost overruns), the vast majority of our trips are made on local streets whether we walk, bike, drive or take transit. So investing $0.93 billion over nine years on local transportation really isn’t an outrageous number. If anything, it’s probably not enough.

Of course, paying for vital city improvements is an important conversation. Should it come entirely from property taxes? Should some kind of developer impact fee, employee hours tax and/or commercial parking tax help offset some of the property taxes? That’s the debate at the moment.

But amid all the focus on the “costs,” don’t lose sight of the vision of what this level of investment can create for Seattle.