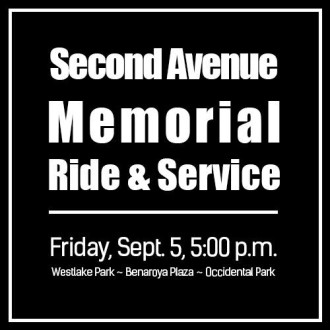 The death of Sher Kung on 2nd Ave has shaken up a lot of people whether they ride a bike or not. After all, so many people bike into downtown at the same time of day that it could have easily been anyone, and anyone’s loved one.

You have a chance to honor her life Friday evening by taking part in a memorial bike ride that meets at 5 p.m. at Westlake Park. The ride will move slowly to Benaroya Plaza near the fatal collision site for a short service and moment of silence that starts at 5:30. If you do not have a bike, you can meet the memorial there.

The ride will then continue to Occidental Park where people can learn how they can help to increase safety on downtown streets.

Again, our deepest condolences to Kung’s family and friends.

Kung’s death was the first person to die while biking in Seattle in 15 months, according to SDOT records. Two people were struck and killed in May 2013, including Darren Fouquette May 30 on Airport Way near the border with Tukwila and Lance David May 1 on E Marginal Way.

The city made it more than a year without a person on a bike dying, which is an impressive achievement. But many people were injured during that time, and it probably does not bring much solace to Kung’s friends and family. It’s a start, but it’s not good enough. We have a long way to go before we reach the city’s goal of zero traffic deaths and serious injuries by 2030. 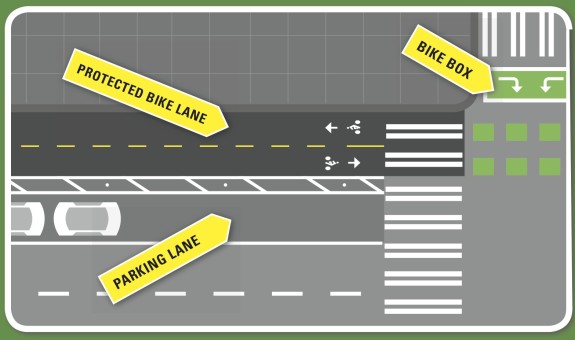 From an SDOT educational postcard about the project

As we have been reporting for months (and urging for years), the city is in the midst of a safe streets project on 2nd Ave that will significantly upgrade the existing decade-old, paint-only bike lane squeezed between parked cars and moving traffic. The 2nd Ave bike lane is full of hazards, and cars and trucks often make left turns directly in front of people riding in the bike lane.

Currently scheduled to open Monday, the new bike lane will be protected from moving traffic by either a row of parked cars or a line of reflective plastic posts. At intersections where left turns are allowed, people biking and people making left turns in their cars will have separate signal cycles. So when someone on a bike has a green light, left turns have a red arrow and vice versa. So long as nobody runs a red light, the majority of turning conflicts should be eliminated.

The new bike and turn signals are already installed and hanging on poles at the site of last week’s fatal crash, but they are not yet ready to be switched on.

The city has been gearing up for protected bike lanes in downtown for a couple years now, and the 2nd Ave project is the first tangible result of those efforts.

“Last fall, [the City Council] took about a million from [Mike McGinn’s] proposed streetcar connector project and put it into the bicycle master plan,” said Councilmember Tom Rasmussen, chair of the Transportation Committee. That money was earmarked specifically for protected bike lanes in downtown.

The city also applied for and received millions of dollars in federal grants to design and build a network of protected bike lanes downtown, including routes on 4th, 7th and Pike or Pine. The current timeline to see those plans in action on the ground is 2016, though perhaps the city’s experience opening 2nd Ave on a quick timeline will help speed up the other projects.

“I think it speaks to the need for moving quickly on safety improvements,” incoming SDOT Director Scott Kubly told the Seattle Times while visiting the memorial for Kung Friday afternoon.

But as Dominic Holden at The Stranger reported this week, the city has been dramatically underfunding the Bike Master Plan ever since it was first passed in 2007:

Still, the council has quietly resisted [funding the bike plan]. In 2007, the city adopted the Bicycle Master Plan with an estimated $240 million in spending required in the first decade (not accounting for inflation). But seven years later, the city’s transportation department reports the council has spent only $42 million from its capital budget, less than one-quarter the funding the plan needs by now. Even accounting for a handful of tributary funds, the council funded only $11.5 million of the plan this year (the equivalent of $10 million in 2007 dollars), effectively underfunding it by roughly three-fifths.

In order to adequately fund the updated Bike Master Plan, the city would need to invest about $20 million per year. That’s a little less than double what has been invested in recent years.

In fact, the protected bike lane project is only this close to completion thanks to Mayor Ed Murray, who in May gave SDOT the mission to get the upgraded bike lane completed by the time Pronto Cycle Share launches (now scheduled for October 13). For a significant bike lane project like this in such a dense part of the city center, that is an extremely quick turn-around especially in Seattle where such changes usually get trapped in the notorious “Seattle Process.”

But it wasn’t fast enough. People have been warning about dangers using the 2nd Ave bike lane essentially since the day it opened. People reported 57 collisions on the street during the period from January 2007 to March 2013, Seattle Times reports. Of those, 16 were either at the intersection with University or in the block leading to it. Many more collisions undoubtedly went unreported.

We have known about the problem for years, and we have also known the solution: Protected bike lanes with separate signals.

Like any street change, installing bike lanes can get people worked up. And with traffic as bad as it is downtown, politicians were clearly worried about backlash if they proposed or supported a major upgrade to downtown bike lanes like the one now happening on 2nd. But delaying a clearly-needed safety improvements carries a serious price, and unfortunately Kung has paid it.

Below is a letter to Kung’s friends and family from the Seattle Bicycle Advisory Board: