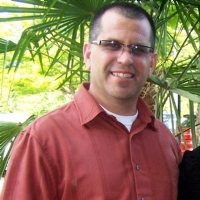 Image from an obituary posted by St. John Bosco High School, which he attended in the 80s.

Michael Jordan, 22, was going 73 in a 45 and possibly chatting on a cell phone when he moved into the right lane to pass a semi on Airport Way near Boeing Field in the morning of May 30, 2013. But the semi had changed into the left lane to pass Darren Fouquette, 46, who was biking south about to cross the Seattle-Tukwila border.

Jordan pulled the emergency brake, but it was too late and he was going too fast. He struck Fouquette hard. After a day in the hospital, Fouquette died. He left behind a wife and four children in Gig Harbor.

A Seattle driver suspected fatally ramming a cyclist while chatting on his cellphone has been charged with vehicular homicide.

King County prosecutors claim Michael Jordan hit and killed Darren Fouquette nearly a year ago in Georgetown. Investigators contend Jordan, 22, was certainly speeding and may have been on his phone when the wreck occurred.