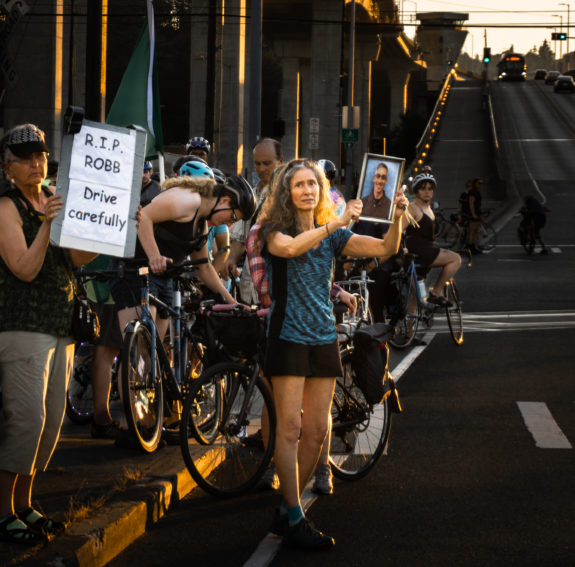 Mohamed A Yusuf, a 20 year old living in West Seattle, faces counts of vehicular homicide and felony hit and run after allegedly striking and killing Robb Mason with his Hyundai Elantra while Mason was biking in a crosswalk just south of the Spokane Street Bridge in July.

Robb Mason, a massage therapist from West Seattle, was 63 when he was killed. Since the tragedy, there have been multiple memorial rides for Robb, and his wife Claudia has made powerful calls to improve safety. Our condolences to Claudia and all of Rob’s loved ones.

Prosecutors accuse Yusuf of driving more than 50 mph in a 25 mph zone and crossing the double yellow centerline before striking and killing Robb. He slowed briefly before fleeing the scene.

The charging and probable cause documents give a brief outline of how investigators found Yusuf and claim that he admitted to hit and run though posts on Snapchat. His vehicle was identified through “several road cameras and significantly a Metro bus’s forward-facing camera.” Investigators also used Ring camera video and audio to capture what prosecutors claim was Yusuf “telling someone he was driving ’55mph.'” They also obtained his phone and claim to have found searches for “hit and run death of cyclist” and evidence that he was reading news articles about the event including one in which Claudia pleaded for the person responsible to turn themselves in.

It is important to note that charging and probable cause documents are nearly always incomplete, so more information will likely come out as the case moves forward. Yusuf has not yet been arrested and has been summoned to appear at an arraignment January 9, West Seattle Blog reported. The Seattle Times posted the charging and probable cause documents (PDF).