UPDATE: A GoFundMe has been set up to support Robb’s family.

EDITOR’S NOTE: Thank you to Judi for sending this obituary and photo of Robb. You can find out more about this incident in our previous stories. The July 29 Critical Mass ride has become a memorial ride for Robb. Critical Mass meets 6:30 p.m. at Westlake Park downtown the last Friday of every month. Ride starts at 7. 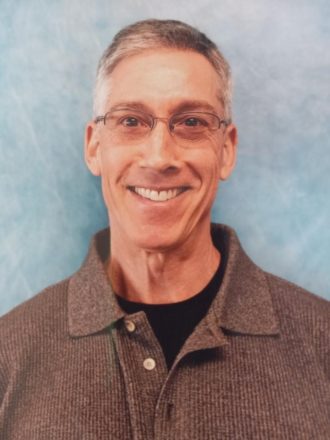 Robert J. Mason, “Robb”, aged 63, residing in Seattle, WA, passed away on July 15th, 2022 after having been the victim of a hit-and-run driver while commuting home on his bicycle.

Born in Van Nuys, CA, Robb graduated from Pacific Lutheran University in Tacoma, WA with a BFA in Communications & Broadcast Journalism. Later in his career, Robb discovered his true calling and retrained as a massage therapist at the Brian Utting School of Massage in Seattle. He opened his own practice, RMBodyWorks, in 2003 as a licensed massage therapist. He also completed additional training at the National Academy of Sports Medicine, with an emphasis on core fitness and balance/stabilization techniques.

In addition to his private practice, Robb also worked at Highline Physical Therapy in West Seattle. As a massage therapist, Robb saw his role as that of a facilitator for positive change and healing, using his massage techniques and listening skills to make a positive difference in his clients’ lives. He was seen by colleagues and clients alike as an astute and caring clinician.

A sports and physical fitness enthusiast throughout his life, Robb enjoyed track, baseball, skiing, cycling and golf. In later years, he became an avid hiker, enjoying multiple trips to the Alps in Switzerland to hike with members of his extended family. He marveled at the beauties of nature on these trips, and they served to deepen his reverence and respect for the environment.

Robb and his wife sponsored a child, Alexander, in Ecuador.

He is survived by his wife of 18 years, Claudia Mason (née Perotto) and by his sister, Faith Mason. He is predeceased by his parents, William and Imogene Mason, and his brother, Charles.

A private memorial service for Robb Mason will be held on Monday, July 25th, 2022 for relatives and close friends.

Due to the tragic circumstances of his passing, a memorial vigil ride in honor of Robb Mason will be organized by Seattle Critical Mass on July 29th, 2022 from downtown Seattle to the site of the collision on SW Spokane Street, just east of the West Seattle low bridge.

The Seattle Police Department continues to investigate this collision and have asked anyone with information about it to call the Violent Crimes Tip Line at (206) 233-5000.

This entry was posted in news and tagged robert mason. Bookmark the permalink.