In wake of Eckstein tragedy: Memorials, fundraiser and a new push for a safer NE 75th St 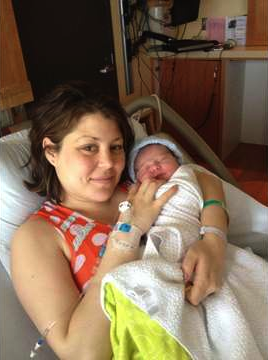 Karina and Elias just weeks ago. Photo from the fundraiser page

Friends, family and neighbors continue to mourn the deaths of Judy and Dennis Schulte Monday and send their thoughts and prayers to Karina and baby Elias as they recover from critical injuries.

People can also help the family financially by donating to an online fundraiser campaign, which had already drawn over $29,000 by Thursday afternoon.

The neighborhood will also have a chance to talk about the incident at the Ravenna-Bryant Neighborhood Association community meeting at the Ravenna Eckstein Community Center’s gymnasium (April 2, 7–9 p.m.).

And Seattle Neighborhood Greenways will hold a community walk from Top Pot Doughnuts to the memorial site and back Monday starting at 4 p.m. Details:

Why: In King County up to 100 people die and an additional 730 are seriously injured in traffic crashes every year.

More: Monday is a week from when a tragedy occurred in front of Eckstein Middle School.

· If you feel a great longing to pay your respects to the good people who died at 75th and 33rd.

· If you want to support changes now that will save hundreds of lives in the future.

· If you want to walk for yourself, your family and your community.

Crossing streets with dignity is our right as people everywhere in Seattle.

We will meet at Top Pot Monday 4/1 at 4 p.m., walk to the crash site, and walk back via the proposed NE Seattle Greenway by 5 p.m.

You can bring flowers. Or bring canned food to leave at the site that will be taken to the University Food Bank. Dennis and Judy Schulte, who were killed on Monday, had a passion to provide food for at-risk children.

In the wake of the tragedy, two very important issues have come to light that the city and state have the ability to address: Road safety on NE 75th St and tightening laws pertaining to breathalyzer ignition locks for DUI convicts.

We have discussed road safety on NE 75th St already this week, but the Wedgwood Community Council also took specific issue with the width of traffic lanes, which make it difficult to create safe crosswalks. The council even posted a 2010 email exchange between a concerned citizen and SDOT on this very issue. SDOT explains that technically, because the lanes are wide enough for two cars, it can be treated as a four-lane road even if they do not paint the dashed lane-divider lines. Obviously, this is extremely dangerous, and it’s a problem we have known about for years.

A new Facebook group has formed to call for safety improvements to NE 75th St. As we wrote earlier this week, NE 75th St is not unique. There are dangerous streets just like it in every neighborhood in Seattle. It’s well past time for the city to get serious about road safety investments instead of just talking about it.

Another issue that has come up is how nearly pointless our state’s existing ignition lock laws are. Basically, one tool to curb drunk driving is for the court to mandate that a violator install an ignition lock system that will not let them start their car unless they can pass a breath test.

However, Mark Mullen’s truck did not have an ignition lock system installed for a very simple reason: He promised the court he wouldn’t drive. Mullen’s license had been suspended for previous DUI offenses, and the law essentially allowed him to keep his vehicle without installing this safety feature that could have prevented him from starting his truck Monday. All he had to do was lie.

The Seattle Times has a great story about ignition lock systems, and how people are easily getting around them. This should be a call to action for the legislature to close the loopholes that allow DUI offenders to keep driving. The honor system is clearly not working.

We send out best wishes to the friends and family of Judy, Dennis, Karina and Elias.

Four felony charges of vehicular homicide and vehicular assault were filed today against Mark W. Mullan, who was allegedly driving drunk when his pickup struck a group of pedestrians in Seattle’s Wedgewood neighborhood on Monday. Mullan is charged with two counts each of Vehicular Homicide and Vehicular Assault, and one count of Reckless Driving. The collision killed Judy and Dennis Schulte. Their daughter-in-law Karina Ulriksen-Schulte and 10-day-old grandchild Elias remain in the hospital in critical condition. According to charging documents, Mullan’s preliminary blood alcohol level was 0.22 percent, which is almost three times the legal limit.

“In the blink of an eye, a family was destroyed by the decision we allege that this defendant made to drink and drive,” said King County Prosecutor Dan Satterberg. “It is a senseless loss and a tragic reminder that our society has a long way to go to eliminate the danger posed by impaired drivers,” he added. “What too often follows the decision to drink and drive are funerals, hospitals and jail cells,” he said.

The defendant is an alleged repeat drunk driver who pleaded guilty in January to driving under the influence (DUI) in Seattle Municipal Court and also has a pending DUI case in Snohomish County from last October. Mullan, 50, faces a sentence range of 15 to 19 ½ years in prison if convicted as charged.

Satterberg along with other county prosecutors pushed for tougher sentences for vehicular homicide (DUI) in the 2012 legislative session. The Legislature approved a bill that doubled the standard range for vehicular homicide (DUI), making it equal to a sentence for manslaughter first degree. Under the old range, Mullan’s sentence range would have been approximately 9 to 11 ½ years.

The defendant remains in jail with bail set at $2.5 million. He will be arraigned on April 11 at 8:30 a.m. in courtroom 1201 at the King County Courthouse.

8 Responses to In wake of Eckstein tragedy: Memorials, fundraiser and a new push for a safer NE 75th St