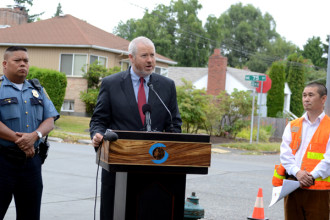 Mayor Mike McGinn announces plans for the NE 75th Street safety project in July. His opponent, Ed Murray, originally said the project was a ‘mistake,’ but now agrees it was sucessful

The Ed Murray campaign this morning backtracked on his answer to Feet First about the NE 75th Street bike lanes, saying the project was “not a mistake.”

As we reported yesterday, Murray had originally told Feet First that the project was a mistake because it removed parking and included bike lanes. However, city studies had shown that the parking was rarely used.

The project was demanded by neighbors after a devastating DUI collision that took the lives of Dennis and Judy Schulte and seriously injured Karina and baby Elias. The city and mayor held a series of public meetings, created a set of options, heard feedback and then redesigned the street within six months of the tragedy.

The NE 75th Street project was not a mistake. This dangerous corridor was long overdue for a change that would make it safer for all users, including the children coming and going from Eckstein Middle School. Unfortunately it took a tragic accident for the changes to be made. Still, while the removal of parking and the addition of a bike lane as part of efforts to make the street safer were the correct moves in this instance, and it was supported by the community, it is not necessarily always the best approach in every instance. There are real impacts to pedestrians, the elderly and disabled when parking is removed. Each of these neighborhood corridors is unique and can not be treated with a “one size fits all” approach. The Mayor tried to take this approach on NE 65th Street and was met with strong opposition at a local public meeting in August. This is another reason why we need to take a more comprehensive and integrated approach to our transportation planning. These types of changes need to be made in the context of the entire system, while the benefits to the system and to all users need to be more clearly articulated. We must be diligent about balancing the needs of our limited rights of way.

The NE 65th Street issue he refers to is actually part of the Bike Master Plan. Since the bike plan is a high-level citywide plan for bike routes, it does not include specific design details such as parking removal.

Rather, the bike plan is a guiding document created with the input of a variety of neighborhood and industry stakeholders. It does reference existing transportation plans, like the Pedestrian Master Plan, Transit Master Plan, Climate Action Plan and map of existing freight routes.

The plan update is still being finalized and should go to the City Council for a vote in the coming months. You can read the most recent draft, which outlines its process and goals, here.

In reference to NE 65th Street — the one street on the city-wide plan that has by far received the biggest pushback — the question facing the neighborhood and city (and the candidate who will be elected mayor in November) is whether the 20-year Bike Master Plan should strive for a protected bike lane of some kind on NE 65th Street.

After the public meeting in August that Senator Murray references, the city went back and created a series of options for the bike plan based on the feedback they heard. They then held another open house to collect feedback, and an online survey (EDIT: It has closed). It would be a stretch to describe this process as “one size fits all” or happening not “in the context of the entire system.”

We have follow-up questions into the Murray campaign asking which NE 65th Street option he would prefer and if he has any other examples of McGinn’s “one size fits all” bike lane projects that turned out to be mistakes.