Ed Murray told Feet First recently that he thinks it was a mistake to install bike lanes on NE 75th Street, part of a road safety project demanded by neighbors following the devastating collision that killed Judy and Dennis Schulte and seriously injured Karina and weeks-old Elias.

So why does Ed Murray oppose it? Here’s his response to Feet First:

Current revisions of this sort (e.g. along NE 65th and NE 75th) have slowed traffic and will likely improve pedestrian safety.  But these revisions also included bike lanes on either side of the street and got rid of all street parking.  This was a mistake, and disproportionally impacts the elderly and disabled.

Unfortunately, this is a consistent blind spot of the current administration.

First off, there has not been a revision to NE 65th Street that has removed “all street parking” or that “included bike lanes on either side of the street.” This appears to be a factual error. I requested clarification on this point from the Murray campaign late last week and will update when/if I hear back.

As for 75th, it’s true that the safety improvements to NE 75th Street removed all street parking. But, as SDOT clearly states in their July 25 presentation about the project (easily found online at the project website), parking was removed in part because nobody was using it: 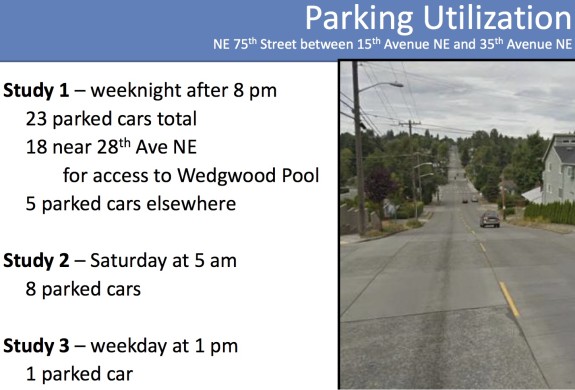 SDOT goes further, explaining that not only is this a clear waste of valuable road space, but empty parking lanes become de facto extra travel lanes, increasing speeding and making it much more dangerous for people trying to cross the street. This was very likely a contributing factor to most of the 114 collisions reported in this stretch of road since 2009. In those 114 collisions, more than 50 people were injured and some died. 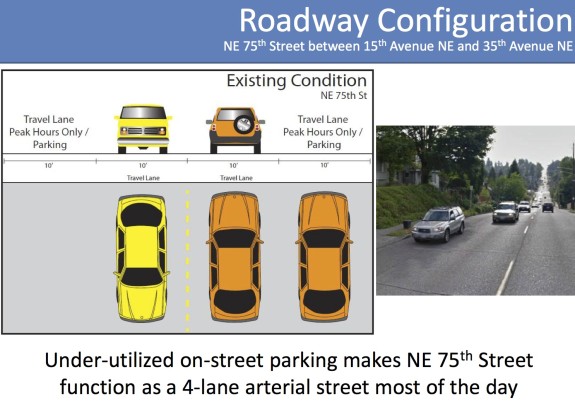 So he’d rather have dangerous empty parking lanes than bike lanes, even though neighbors of the project clearly favored the bike lane option? That’s not only a troubling stance to safe streets advocates, but it’s also a stance that’s not likely to be popular among Seattle voters.

And to say that removing parking “disproportionally impacts the elderly” is troubling. In fact, data shows that the elderly are disproportionately likely to be the victims of traffic violence. This is one reason the AARP is a strong supporter of complete streets projects like the one completed on NE 75th Street.

Once again, Murray shows that he has a poor grasp of local transportation issues. And maybe as executive, he doesn’t need to know about these issues himself (like Mike McGinn very clearly does). But he does need to surround himself with people who do.

Whoever is advising Murray on transportation issues during this campaign is doing a rather poor job of it. Not only has the Murray campaign shown questionable judgment on several transportation issues, they also have done very poor (or no) research into projects before moving forward with an opinion on it (this wasn’t a gotcha interview, these were written responses).

This is concerning. Seattle is a city with no shortage of transportation experts. I seriously hope Murray finds one soon. More importantly, I hope this is not a sign of the kind of backwards transportation advisers he would hire if he wins the election.

But he whiffed, then had to backpedal.

He also accepted money from a fundraiser centered around opposition to installing a safe bikeway on Westlake (though he did tell Publicola that he doesn’t oppose the planned cycle track there). I suppose it’s appealing to get money wherever you can when running for office, but it’s certainly concerning that the people behind the event have the idea Murray will fight against safe bikeways.

And now to come out against a road safety project because it added bike lanes instead of keeping parking lanes nobody used, that’s just wrong. There are streets like NE 75th in just about every Seattle neighborhood, and our next mayor needs to take bold leadership to improve safety on all of them. Murray’s answer to Feet First suggests that he is not up for that challenge.

I am writing this not just to beat up on Ed Murray because I support his opponent. When asked in conceptual terms, Murray supports safe streets, bike lanes and making our neighborhoods safer for people on foot. But when pressed on specifics, he stumbles. I want Seattle to have two candidates who are strong supporters of forward-thinking and safe urban transportation. McGinn clearly is. Murray tries to say he is, but he’s not backing it up.