Murray calls Burke-Gilman Trail a ‘treasure,’ hopes for a safe completion of the Ballard Missing Link 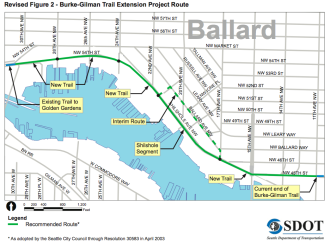 Ed Murray’s campaign issued a statement today saying that his comments to the Seattle Times’ Jonathan Martin came off as “overly skeptical” of the city’s plans to complete the Burke-Gilman Trail’s notorious “Missing Link” in Ballard.

We wrote about his comments yesterday, as they seemed to imply that he opposed completing the long-sought trail segment.

Below is the statement in its entirety. From the Murray campaign:

“Yesterday I made some comments to the Seattle Times expressing concerns about safety issues related to the fact that bikes and trucks will have to share a narrow roadway in Ballard under the cycling community’s preferred option for completing the trail. I want to clarify those remarks, because reading them over I realize that my tone came off as overly skeptical regarding that option.

“The Burke-Gilman is a treasured part of our regional trail system in Seattle and it is vital that we complete this ‘missing link.’ However, we must make sure the proposed route is the safest option for all users. The current proposal does place a multi-use trail through an industrial area, which raises some real safety concerns for users. I do not oppose the proposed route, but I think the Environmental Impact Statement process that is currently underway will provide an important ‘second look’ to make sure we make the best choice.

“SDOT is now working on an EIS to survey the route between the Ballard Fred Meyer and the Locks along Shilshole. The alternative route proposed by some local business owners along Leary Ave NE onto Market St via a cycle track is not ideal either as it would not provide as direct a connection and is not a separate trail. My own preference is that we implement an engineered solution to the safety problem, one that uses the planned public right-of-way in Ballard but which channels the bike traffic and protects the entry points into the Lake Union industrial businesses. I believe the outcome of the current EIS will help us to reach a positive outcome that completes the trail in a timely way while protecting the safety of cyclists and the viability of local businesses.”

29 Responses to Murray calls Burke-Gilman Trail a ‘treasure,’ hopes for a safe completion of the Ballard Missing Link