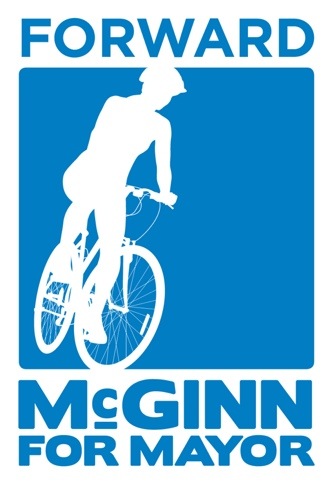 Every now and again, an excited tweet or facebook post pops up from an everyday Seattle resident who saw their mayor smiling and waving as he biked by.

For Mike McGinn, biking isn’t just a talking point or desirable voting block, it’s a part of everyday life and symbol of a better, yet reachable, Seattle.

Maybe that’s why so many of McGinn’s political opponents like to attack his pro-bike record. Because it’s a core part of the direction he wants to lead the city.

And that’s exactly why he deserves your vote in the August 6 primary.

As mayor, McGinn has spent a lot of political capital on safe streets issues. He backed extremely unpopular road safety projects and faced a media firestorm and outraged citizen and industry groups. He received a lot of bad headlines for those projects, followed by a scant few good ones when follow-up traffic studies proved the projects were successful by every measure.

But his steadfast support for streets that are safe for everybody has played a huge role in changing the city’s conversation about transportation. When he took office, the battle for bike lanes was being fought largely between hard core commuters and whoever dared to stand in their way. Seattle Neighborhood Greenways did not even exist yet (neither did Seattle Bike Blog, for that matter).

Now the conversation about cycling is all about roads that are safe for people of all ages getting around town on trips of all kind. It’s about kids biking to school or families biking to the grocery store or the park. And, yes, it’s about people biking to work and back home safely. He has supported the city’s neighborhood greenways movement at every opportunity. He also engaged multiple city departments, media outlets and neighborhood groups across the city in a Road Safety Summit that played a big role in shifting road safety conversations away from “cars vs bikes,” instead focusing on the idea that streets should be places for all people to use safely regardless of how they choose to get around.

His leadership has turned SDOT into a more safety-focused department that takes resident concerns about dangerous streets seriously. When he says that safety is his top transportation priority, he is not just giving lip service. You know he means it.

Perhaps due in large part to how dramatically the road safety conversation has shifted under his watch, there are no Rob Fords in the crowded mayoral candidate field. Being against safe bike lanes would be a serious political miscalculation. Even Charlie Staadecker, the candidate who seems most interested in arguing against bike lanes on busy streets, agrees there should be safe bike routes. (Joey Gray is totally all about bikes, but doesn’t stand much of a serious chance in the race with her poll numbers at 1 percent. Mary Martin’s bike lane stance is something about freeing Cuban prisoners. I hear Doug McQuaid is a real person, but that has not yet been 100 percent proven yet).

Of the top-polling candidates, Ed Murray, Mike McGinn and Peter Steinbrueck have all voiced strong support for safe bikeways, neighborhood greenways and finding a sustainable and significant funding source for biking and walking projects.

You can hear more about their road safety positions in this video of a mayoral forum hosted by Seattle Neighborhood Greenways and moderated by myself and Bike Works’ Deb Salls.

Bruce Harrell seems the least interested in making biking and walking safety a priority in his campaign, but he also doesn’t seem super interested in stopping the city’s progress. He has questioned the cost of cycle tracks and the price of automatic school zone speed camera tickets, signs that he might not be the strongest leader on the issue of road safety.

“The highest priority for me is pedestrian and bicycle safety, because those are the most vulnerable on the street and because we lose 10 to 15 people a year in pedestrian-vehicular conflict”

But, of course, fast high capacity transit is a vital part of a Seattle that is truly friendly to walking and biking. It’s one example of Steinbrueck’s questionable tendency to try to separate walking and biking from other key issues that have a strong effect on it.

Another example is land use. Steinbrueck has received a lot of support from people who don’t want to focus density in central Seattle neighborhoods, like Capitol Hill and South Lake Union. As he told CHS:

Rather than spending the city’s time and resources on accommodating more density in central Seattle, Steinbrueck is more interested in finding ways to encourage density in the city’s outlying areas.

“If you exclude single family homes on Capitol Hill, there’s not a huge potential for massive growth,” he said.

But as Seattle-based WalkScore has done an absolutely fantastic job illustrating, land use and walkability/bikeability go hand-in-hand (see also this post about their eye-opening ChoiceMaps feature). The more destinations within an easy bike ride or stroll of more homes, the more people can experience life in a truly walkable and bikeable neighborhood. And that’s exactly the kind of place people want to move to these days. Ask anyone who has tried renting a place on Capitol Hill or the Central District recently and they will tell you: There is a huge need for more housing in central Seattle. And the Capitol Hill light rail station is not even open yet.

Ed Murray has essentially never voiced significant opposition to a walking or biking position McGinn has held, from what I can tell (they did have a spat on Slog about Sound Transit service areas that I’m pretty sure 99 percent of the electorate slept through). He also hasn’t really offered many new positions, instead choosing to paint the mayor as divisive and making the case that though he essentially agrees with McGinn on everything transportation-wise, he would somehow bring people together better to make more happen.

The only concrete proposal Murray has made (that I can find) is to create a Seattle Transportation Master Plan that would combine the walking, biking, transit and freight mater plans developed during the past half decade or so. But OMG, if there’s one thing Seattle doesn’t need, it’s another damn transportation master plan. We need a mayor with a clear drive to build the stuff we already have planned.

We wrote a few months ago challenging the other mayoral candidates to try to outflank McGinn as the most inspiring candidate on transportation issues. Nobody did (though Kate Martin deserves a shout out for taking us up on the challenge and having a very interesting chat over coffee).

We currently have a mayor who has proven he is willing to take political hits to make biking, walking and transit projects happen. He clearly understands how city transportation should work, he understands how urgently we need safe streets and fast transit, and he is willing to do what he can to get us as far as possible in the time he has in office.

A note on voting: Ballots are in the mail. Don’t throw yours into a stack of mail. Vote early. See more 2013 primary endorsements here.

Founder and Editor of Seattle Bike Blog.
View all posts by Tom Fucoloro →
This entry was posted in news and tagged 2013 primary, mike mcginn. Bookmark the permalink.