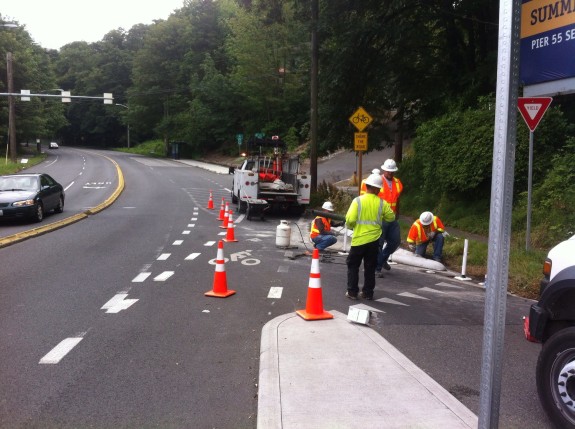 My head is still spinning by how fast the city and SDOT responded to this dangerous right turn lane at Dexter and Nickerson.

Friend and Seattle Bike Blog reader Maile Martinez got in touch last week with the story of her sister Alana’s nasty hit-and-run at Dexter and Nickerson late July 6. Alana, who was in town visiting, was struck from behind by a person making a right turn from eastbound Nickerson to southbound Dexter. She never saw the car, and the driver did not stop.

Shortly after publishing a post about the collision July 10, I happened to bike by the spot and noticed that a series of plastic pylons installed to channel right-turning cars was destroyed and missing. The pylons were meant to slow right-turning cars and direct them into a safer 90-degree crossing of the bike lane. Without the pylons, it was easy for people driving to end up driving through the bike lane at high speed: 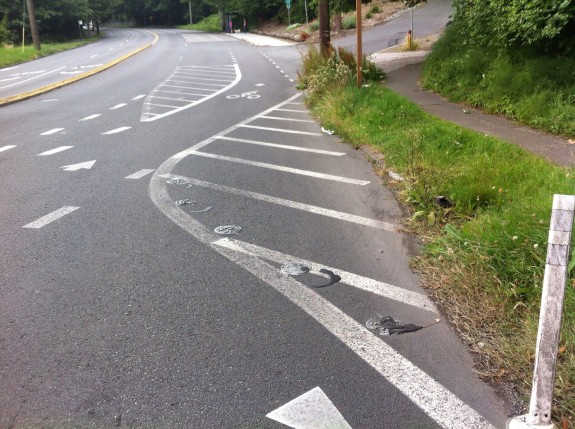 I suggested in the July 10 post that the city install a permanent solution, noting that the plastic pylons were clearly not enough. Maile and her partner Archie (who also happens to be a Central Seattle Greenways member) urged the city to do something similar during a July 12 meeting.

Now, just days after that meeting, SDOT crews are out installing a permanent curb (see photo at top). That’s some seriously fast turnaround.

I am really grateful to Seattle Bike Blog, KOMO 4 News, and lots of friends and followers on Facebook and Twitter who helped to spread the word about this story. In particular, my partner Archie contacted SDOT directly and asked for a meeting to discuss how to make this intersection safer. He met with an SDOT representative on Friday, July 12, and he learned that SDOT now has plans in the works to install a new curb right where the stripes are painted on the pavement at this intersection. Archie rode by the intersection after his meeting and noted that SDOT has already marked the pavement.

Maybe the bigger story here is Dongho Chang’s influence on SDOT, and Mayor McGinn and SDOT leadership giving him their support to make changes quickly. Since taking the position of city traffic engineer (he told the Seattle Bicycle Advisory Board it is his “dream job”) just a year and half ago, there has been a very clear increase in responsiveness to residents’ road safety concerns.

Chang’s response to the guerrilla Cherry St protected bike lane has garnered him national attention, with Streetsblog going as far as suggesting he could be “the coolest traffic engineer in the world.” He was out studying E Marginal Way within hours of the fatal collision that killed Lance David, looking for temporary and long-term solutions to the dangerous-but-vital bike route. Their long-term plan for fixing it was put together so quickly that it made it on the list of projects that would have been funded by the ill-fated state transportation package.

Today, he was out with Mayor McGinn talking to Wedgwood residents and media about plans to improve safety on NE 75th Street, where a particularly devastating DUI collision forever changed the lives of the Schulte family. He told the crowd his goal was to have the changes in place before the start of classes at nearby Eckstein Middle School.

Making changes this fast doesn’t just fix the dangerous streets, it also sends a message to residents that their road safety concerns are taken seriously.