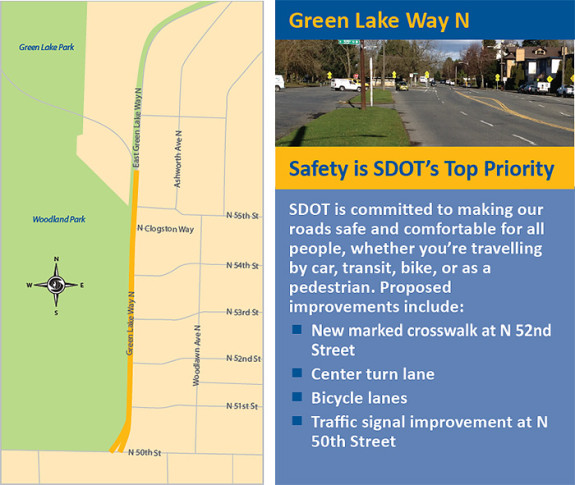 At the urging of the Wallingford and Green Lake Community Councils, the city is planning road design changes on Green Lake Way N between N 50th Street and Green Lake. The safety-oriented plan would redesign the street to more closely match the sections of road on its north and south ends (Stone Way and E Green Lake Way).

The city is hosting an open house about the project tomorrow (Tuesday) from 6:30 to 7:45 p.m. at the Green Lake Branch Library.

Eric Fisk of the Wallingford Community Council called the section the “missing link” in the Stone Way road diet, and said the community has been urging the city to complete the project and reinstall crosswalks since at least 2010 when several members wrote a letter to the city about it (posted to Wallyhood here as a PDF).

“It just seemed it was pretty obvious to extend the road diet on Green Lake Way,” said Fisk. “Neighbors will be able cross into the park again,” he said, noting that the city removed some crosswalks because they were too dangerous due to the four-lane road design.

I really hope this miniscule bike lane was intended to be some kind of traffic engineering joke. Image via Google Street View

Currently the only bike “facility” in the stretch are some sharrows in the curb lanes, which Fisk said “served no benefit.” There are also two of the world’s shortest bike lanes just north of 50th

The city’s plan would finally connect the bike lanes on Stone Way to the bike lanes around Green Lake and beyond. It would also allow for much safer access from Wallingford homes to Woodland Park along what today is an unnecessarily dangerous stretch of highway-style four-lane roadway.

Since the streets to the north and south of this section have one through lane in each direction, there is absolutely no reason for this section to have two in each direction. The extra lanes lead to speeding and make it way more dangerous for people trying to cross on foot or bike (or car, for that matter).

Difficult intersections at 50th and at the Pitch & Putt 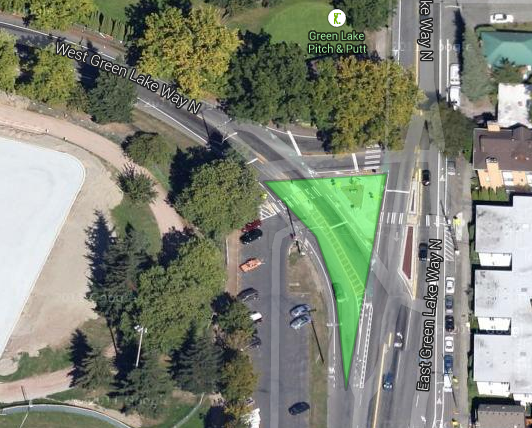 A very rough idea sketch for making the intersection simpler and safer.

The road design near the Pitch & Putt is dangerous and outdated, with “channelized” right turns to allow people to make turns at high speed with highway-style merge lanes that are completely inappropriate for a neighborhood. While this awful design was installed not very long ago, it does not work. It’s likely that much of the open house discussion will be about what to do here.

SDOT is aware of the issues caused by the frustrating triangle design, though budgetary concerns will be the constraining factor for how extreme their solutions can be. One low-budget solution would be to square off the turns like the one recently installed on Dexter Ave. At least then people would have to stop and cross the bike lane at an angle with more visibility.

But for the sake of discussion (and to push for the city consider increasing the budget if necessary to do it right), I made the quick sketch above in Google Maps to demonstrate how closing the unnecessary on-ramp design could work. In a world with unlimited budgets, this green box area could be made into additional sidewalk space or even a small park. A low-budget version could consist of simply installing some planter boxes or bollards to close the road portion to motor vehicles, making it de facto pedestrian space (or, as a compromise, close just one of the two lanes and still allow the left turns from northbound traffic).

In the example above, imagine you are driving and trying to make a right turn from West Green Lake Way onto southbound East Green Lake Way. Today, you would enter the channelized right turn and would likely even be looking over your shoulder for a hole in the oncoming traffic as you drive across the crosswalk and especially as you cross the bike lane. This is extremely dangerous and uncomfortable for everyone, including the person driving. A far more simple option would be to close that channelized area. You would then arrive at East Green Lake Way at a standard T intersection that we are all much more familiar with. 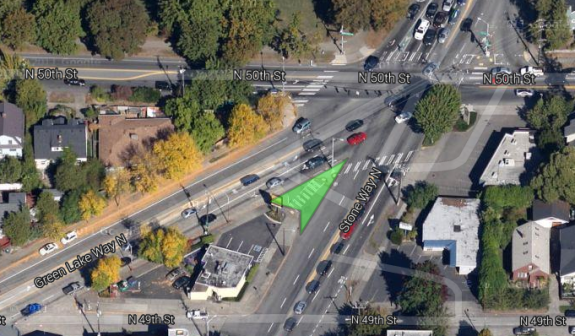 The intersection of Stone Way, Green Lake Way N, and N 50th Street is a complete mess. It is awful for absolutely everybody. The best solution is way beyond me, but I am sure that it must create a more comfortable place for people on foot. Right now, this vital connection between Wallingford homes and Woodland Park is openly hostile to anyone outside a motor vehicle (on top of the messy design, walk signal wait times can be quite long), and a huge headache to everyone in a motor vehicle.

It is unlikely the city will look at any dramatic changes to the intersection. If I knew what to suggest, I would do so (assuming we can’t build a time machine and throw tomatoes at whoever planned this mess or stop the state from turning Aurora into a freeway. If only…). The full solution is probably painful and expensive, and won’t be part of this project.

However, one good opportunity for a small-but-significant change could be to close the channelized right turn from northbound Green Lake Way N onto Stone Way, as pictured above. I’m not even sure how many people would even make this maneuver (it’s backtracking for anyone coming from Aurora), but those who want to can make their turn using the tiny N 49th St (which could perhaps use some traffic calming to make sure people who do so are moving at a safe speed).

The sidewalk could then be extended all the way from Kidd Valley to the crosswalks across Green Lake Way N and Stone Way. Maybe the city/Kidd Valley could even put a little parklet there with tables and chairs where people can eat a burger outside. Could be a way to create a better walking environment, more space to live and cause essentially no impact on traffic.

Green Lake Way N between Aurora and N 50th Street is a huge problem for traffic and road safety in and through the neighborhood. Addressing its issues is also not in the scope of this project, but fixing it should be on the city’s to-do list. It cuts an awkward angle across the street grid, creating many very dangerous intersections that are nearly impossible to safely cross on foot or bike.

Fisk says the Wallingford Community Council is well aware of the problem and has long urged a solution. But that’s a post for another day…