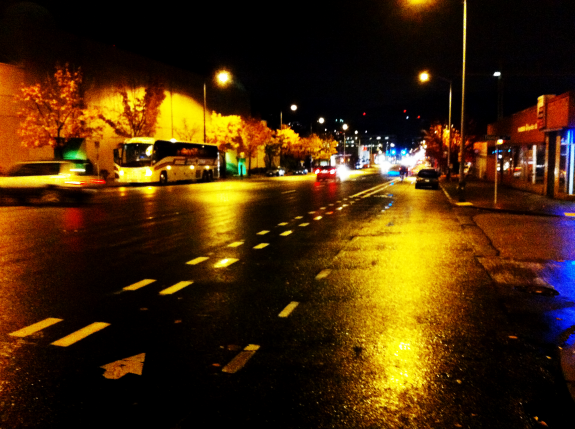 Dexter Ave is among the busiest bike streets in the city. Unfortunately, it has also been the scene of far too many collisions, including a very serious one July 25 and, of course, the devastating collision that took the life of Mike Wang in 2011.

Following Wang’s death, the city painted a couple feet of extra buffer space next to the bike lanes, but the most recent very similar collision just a block further north shows that the extra paint is not enough to address the problem.

After the most recent collision, I was contacted by many readers who expressed concern about the continuing danger and asked if the city planned to do anything to address the problem. I asked SDOT officials, who said they now have plans to look at the section of Dexter Ave between Denny and Mercer next year.

SDOT is looking at ways to improve bike safety along Dexter Avenue North. In support of cyclists, we recently installed C-curbs at Dexter and Nickerson to slow merging cars. We also recently made improvements to the two blocks of Dexter Avenue N/Seventh Avenue between John Street and Bell Street to help the street operate more safely and efficiently for everyone. That project reduces the amount of weaving between motorists, transit and cyclists, provides more storage for right turning traffic, and encourages safer and more predictable driving behavior.

To further enhance bike and pedestrian safety along this corridor, in 2014 we will evaluate Dexter from Mercer Street to Denny Way for possible improvements. While driver behavior remains the leading cause of collisions, we want to ensure vulnerable users can safely and comfortably travel on Seattle’s streets.

Inevitably, the question arises about what the city can do to stop people from breaking traffic laws like failure to yield (likely what happened in both collisions, if witness statements to the press are correct). Of course, driver attention is a vital aspect of road safety, but the city can design streets in a way that minimizes the potential dangers and chances for devastating driving mistakes.

While it’s not yet clear what the scope or budget for a Dexter redesign project will look like, we can use this segment of roadway as a great case study to discuss ways streets can be designed to make them easier to drive and safer to biking and walk.

First, here’s the current configuration (well, without the painted buffers, which were not on Google Street View):

Dexter is a very wide 90 feet of right of way (including sidewalks) with relatively low motor vehicle traffic levels (and high bicycle traffic levels). Unlike many popular Seattle streets with many different modes competing for little road space, Dexter has too much road space with too few people trying to use it. Excess road space leads to speeding and requires people driving, biking and walking to navigate across multiple lanes to make simple turns and crossings. All these factors add up to an increase in the number of ways a regular, everyday traffic maneuver can end in tragedy. The added speed increases the likelihood that such collisions are severe.

The city cannot easily fix the problem of people breaking road rules or making mistakes, but the city can design roads that reduce the number of chances to make such mistakes and exceed the speed limit.

Using the newly redesigned Streetmix website, I made a few rough thought experiments on ways Dexter could be turned from a dangerous sea of asphalt into an attractive and safe place to bike, walk, drive or catch a bus. I should note that I am a journalist, not a traffic engineer. And there are probably a great many number of ways the street can be improved.

This design includes wide (eight feet) bike lanes protected from general traffic by a line of parked cars. The parked cars have enough space from the bike lane so passengers can open doors without striking someone biking by. The parking also helps to slow passing cars so that most of them would travel closer to the 30 mph speed limit. And, of course, parked cars are a lot cheaper to install than planters or curbs (in fact, they even generate money when the city charges for parking).

The center median would likely be pricey, but it serves two major functions: It makes the street more attractive and it prevents people from using the turn lane as a passing lane. This is especially important at bus stops.

Speaking of which, here’s what a bus stop could look like:

Basically, the space used for parked cars in the first concept image could be turned into a bus island. This keeps transit moving efficiently, gives people waiting for transit a comfortable space to do so and removes the conflict between people biking and buses pulling to the curb to pick up passengers. This style of bus stop is already in use on the section of Dexter Ave north of Mercer.

Most collisions anywhere, but especially on Dexter, occur at intersections. Dexter’s intersections are also complete failures for people trying to cross on foot (again, look at the “current” image above and imagine trying to cross on foot. Yikes!). In this concept image, the space used for parking has been replaced with a low concrete median or pedestrian island of some sort (there would also be a painted crosswalk, not pictured here).

Again, this median serves several functions. First, it assures that parked cars are far enough from the intersection that people turning can clearly see people in the bike lanes. Second, they give people crossing on foot more safe space, effectively reducing their crossing distance from more than 60 feet to about 22 feet. This is huge for all people, but especially for people with mobility issues.

A city that truly prioritizes safety on its roadways would be implementing changes like these as a part of everyday operations. Streets all across the city need this kind of attention, and we are not moving quickly enough to make a dent in the problem. Under Dongho Chang’s leadership, SDOT is becoming an agency that responds more quickly to safety concerns. But it will take a lot more work and a restructured transportation budget if the city will truly achieve its goal of zero traffic deaths by 2030. We really can do this.