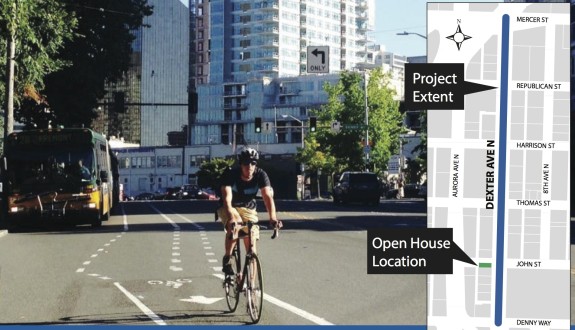 From the SDOT mailer

Dexter Ave may never go back to being the dangerous, super wide street it was before major construction began a few months ago between Mercer and Denny in South Lake Union.

The city is planning a road safety redesign for the street, which is a major bike route and the scene of several serious collisions including the 2011 hit and run at Dexter and Thomas that killed Mike Wang.

You can learn more and provide your thoughts on what needs to happen on Dexter at a morning-time open house from 7 to 10 a.m. August 20 at the intersection of Dexter and John.

Wang’s death on his normal bike ride home from work at PATH shook the city and ignited a movement that changed the conversation about safe streets in Seattle. Shortly after the tragedy — a hit and run that would not be solved until a year later — most the city’s conversations about bikes finally shifted away from “bikes vs cars” or the city waging a “war on cars,” and people started talking seriously about solutions.

Seattle Bike Blog helped organize a Safe Streets Social bike ride that was partly a memorial for Wang and two other people who died while biking in 2011: Robert Townsend and Brian Fairbrother. But it was also a space for people to come together and talk about their fears of traffic, their experiences with dangerous streets and their loved ones who have been killed or injured in traffic collisions no matter what mode they used to get around. Under Mayor Mike McGinn’s leadership, the city launched a Road Safety Summit that invited residents to help shape what would become the Road Safety Action Plan. That plan called for an end to traffic deaths in Seattle.

This is also the time when it became clear we needed a new Bike Master Plan, because the existing plan was not good enough to deal with the kinds of road changes needed on Dexter where Wang was killed.

In late 2011, the city to added some extra buffer space to the existing skinny bike lanes on Dexter. But people continued to get hurt, and it became clear that more would be needed to really fix the problem.

There are few solid details about what kinds of changes the city is tossing around, but protected bike lanes and adding turn lanes are among the ideas they mention on a recent mailer about the project. Dexter is an unusual challenge because unlike many other streets in the city, Dexter actually has way too much space for the relatively little motor vehicle traffic it carries. Its 13,000 vehicles per day (including bikes) is about the same as 10th Ave E on Capitol Hill, which has only two lanes.

When streets have too many lanes — and those lanes are too wide — speeding and other dangerous traffic situations occur. Over-engineered streets are dangerous and uncomfortable to cross on foot, especially for people with mobility issues, and using them is stressful for all road users, including people driving. And it’s not just Seattle Bike Blog that has been arguing for a redesign of Dexter, so has Jonathan Martin, a member of the Seattle Times Editorial Board.

But this is a great opportunity to transform the space into a wonderful and more inviting street that works better for everyone. The big question is one we don’t get asked very often in a space-crunched city: What should happen with all that extra space? Well, that depends on the project’s budget. Below are some quick ideas I put together using Streetmix (note that all measurements are approximate). Let us know your ideas in the comments, and of course let the city know during the open house.

The street is insanely wide with highway-style traffic lanes even though traffic levels are not remotely high enough to use the excess capacity. This is not a comfortable space for people, but there also aren’t very many cars. In other words, it’s all wrong.

The first thing the armchair traffic designers here at Seattle Bike Blog are going to do is move the parked cars to the other side of the bike lanes to turn the existing door zone, paint-only bike lanes into wide protected bike lanes.

And since Dexter is such a busy commute corridor, the bike lanes should definitely be built to handle all future growth in cycling. The ones pictured below are nine feet wide not including the curb. This is wide enough for side-by-side biking and for safe and easy passing. Copenhagen often builds their busiest bike lanes as wide as 13 feet. 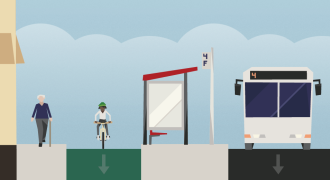 There are bus routes on Dexter, and building protected bike lanes is a chance to eliminate conflicts when buses pull across the existing bike lane to serve a bus stop.

The solution will be no surprise to users of Dexter because it is already in place just a few blocks to the north: Bus islands. By allowing buses to stop in-lane, bus islands speed up transit times and make the buses more efficient (lots of time is lost waiting for a break in traffic so the buses can pull back into the lane). They also free up sidewalk space by moving the bus stop and people waiting into the dedicated bus space. And, of course, they remove the bike/bus conflict.

Bus islands are not exactly cheap (cost varies depending on utilities, etc), but they provide a ton of benefits and are worth every penny.

In the examples below, I do not show any bus islands, but there is space allotted for them in the on-street parking area.

One way to deal with the extra space is with a center median, which could have the added benefit of adding some much-needed greenery in this asphalt-heavy area. Tree canopies have been shown to reduce speeding, and the median space would make crossing the street on foot much more pleasant. But this project would likely come with a pretty hefty pricetag.

This option is essentially the same lane conditions as the boulevard option, but instead of a center median the extra space has been added to the sidewalks to create wonderfully wide space for walking and other sidewalk uses (sidewalk cafes, etc). This project would also not be super cheap.

If the city is on a budget (and of course they are), a much lower cost option would be to include wide protected bike lanes and a painted center turn lane. Simple, intuitive and comfortable for everyone.

What if that extra space were dedicated to creating a long, parklike experience on one side of the street (probably the side farthest away from Aurora)? The space could have expanded walking space and greenery, benches, sidewalk cafes, a skate spot or two and any other creative and evolving use of the space people can think of. Basically, what if every day were PARK(ing) Day on Dexter?

Plus, it would nearly connect Seattle’s oldest park (Denny Park) to one of it’s newest (Lake Union Park), which would be pretty awesome.

This option does not necessarily need to be super expensive. Planters can be used to delineate the new pedestrian space if building out sidewalks is too pricey, for example. It could also be a chance for employers in the area to partner with the city the way the existing parklet project works.

Or, if you want to really go all out, what if we took the same idea but also got rid of one lane of on-street parking to make the park space even wider?

Basically, there are a ton of different options that could not only make Dexter safer, but also make it a more inviting space to be. Really, doing anything else with that excess road space would be an improvement over the status quo, so it’s great that the city is not interested in returning it to its former state when construction finally settles down in the area.

Below is the open house mailer: