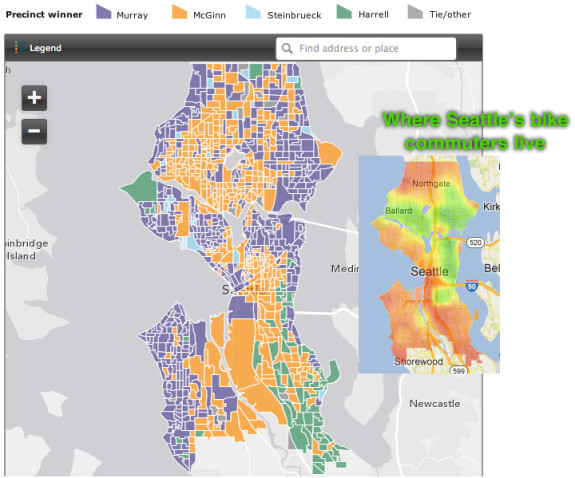 The Seattle Times released an interactive map this week visualizing Seattle’s mayoral primary election precinct-by-precinct. So I thought, How do the results compare to bike commute rates?

As you can see above, there is a correlation between neighborhoods with high bike commute rates (the darkest green sections are nine percent or higher) and votes for Mike McGinn. In no way is this meant to suggest that bikes are responsible for McGinn’s votes. But there’s at least a shared zeitgeist between McGinn and many neighborhoods where biking is a popular part of daily life.

But there are some clear deviations from that theme, and it’s clear that McGinn’s support reaches far beyond the people biking to work every day (this might seem obvious to most people, but not some shock jocks, columnists and comment trolls).

Notably, Seattle’s bikiest area leaned toward Ed Murray. McGinn won the bikey U District fairly strongly, but he barely squeaked out a win in the North University/Ravenna neighborhood that is home to the city’s highest bike commute rate. Areas of Northeast Seattle with very high bike commute rates — like Bryant, Laurelhurst and Wedgwood — leaned toward Murray. Murray also won his home turf in very bikey North Capitol Hill and Montlake.

Perhaps it is partly due to McGinn’s home field advantage in North/Northwest Seattle, but his reach there went much further than the northern Ballard/Greenwood bike commute cutoff around 90th Street, north of which bike commute rates drop dramatically.

McGinn’s support also stretches far beyond bikes in South Seattle. In fact, a cursory look at the election map suggests one path to victory lies in less-bikey parts of Beacon Hill and Rainier Valley, where he has very strong support that in no way correlates with bike commute rates. In most Beacon Hill/Rainier Valley districts that Bruce Harrell won, McGinn trounced Murray. So if McGinn can capture the majority of those Harrell votes, he could be looking very good in the general election.

Both McGinn and Murray have expressed strong support for dense, walkable, bikeable and transit-oriented policies. But McGinn seems to have made a more convincing case to the densest and most bike-friendly areas of the city. Likewise, Seattle Bike Blog endorsed McGinn in the mayoral race.

Murray’s support is largely in wealthy (McGinn won few waterfront precincts) or lower-density (and more car-oriented) neighborhoods, which is probably not exactly what he expected or would have liked. Will Peter Steinbrueck’s supporters default to Murray, or will Murray need to make some backwards, anti-density comments to get that support? I imagine it’s an awkward position for him.

So what role will biking play in the mayoral election? It’s unclear. Barring any missteps from Murray, perhaps the most important role of bicycling has already been completed. After all, both candidates agree that bike safety and access is important. It would seem rather poor strategy for either candidate to deviate from that point unless Murray really does want to abandon his central Seattle votes. Bicycle support can help boost McGinn’s Central and North Seattle bases, but I would wager that other issues will ultimately decide the race in areas like Rainier Valley with a lot of votes up in the air.