Mike McGinn will run for another term as mayor 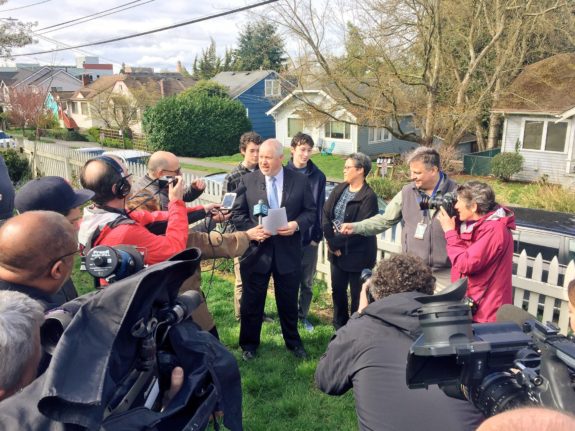 Standing in the yard of his Greenwood house with his family — a couple campaign signs leaning against the white picket fence, perhaps dusted off after four years in storage — Mike McGinn announced his candidacy for mayor.

This wil be his third mayoral campaign in eight years. And as he joked with media, he’s 50 percent on winning so far.

There were no “Mike Likes Bikes” stickers around this time. At least not yet. In fact, McGinn did not directly mention bikes during his half hour in front of the TV cameras Monday morning other than to highlight the Road Safety Action Plan created under his leadership in 2012. McGinn pursued some bold and sometimes controversial complete streets and bike safety projects during his term, earning him the supposedly-diminutive-but-actually-kinda-cool nickname Mayor McSchwinn. Bike commuting rose more than 40 percent during the first three years of his term, but have since plateaued.

Instead, his focus Monday was mostly on housing affordability and the need for taxes on high earners and big companies.

His slogan “Keep Seattle” has so far fallen pretty flat with local media (as the Stranger asks, “What the fuck does that mean?”). During his announcement, he talked about rising housing costs and regressive taxes that force people out of town as the city becomes a wealthy enclave rather than a place for everyone.

“We can’t let this city become San Fransisco,” he said. I guess that’s what “Keep Seattle” means. “The people who helped make this city what it is, make it so attractive, are being pushed out by the growth.”

McGinn also made some statements seeming to tap into neighborhood unrest over development, walking a line between NIMBY anti-development talk and urbanist visions for upzones.

“You can’t tell [neighbors] a bunch of people in a big room made a grand bargain,” he said, challenging a central piece of Mayor Ed Murray’s Housing Affordability and Livability Agenda. The so-called “grand bargain” was created by a large group of affordable housing leaders, urban planners and developers to allow taller buildings in certain urban villages and centers in exchange for either a portion of units reserved for affordable housing or fees directed to affordable housing.

Questioning the grand bargain is not going to land well with many people who are sick of talking about the problem and want to see some real action to build more homes. Instead, McGinn said he wants to bring together homeowners, renters and builders to “have it out.” That sounds like more process.

But he also said, “Standing still isn’t an option.” And his record as mayor the first time was not particularly anti-development. He apparently sees a path through the debate that crosses the gap between neighborhood activists working against development and urbanists pushing for swift action to increase the production of new homes for all income levels. His announcement was not specific on a policy he prefers in lieu of the grand bargain.

Seattle Bike Blog endorsed McGinn in both the primary and general elections in 2013, when Mayor Murray defeated him by 8,500 votes (we have not yet endorsed in the 2017 race). Many people may remember that election as a clobbering because the gap was huge on the first night of returns. But by the time all the votes were counted, McGinn had narrowed Murray’s win to 5 percentage points. That’s still a decisive win, but not a landslide.

And Murray got extremely lucky in that campaign. Just one month after people voted, Bertha broke down. If the controversial tunnel boring machine that Murray had championed in the state legislature had broken during the campaign, McGinn would likely be mayor today.

But don’t worry, the tunnel is still a campaign issue for McGinn.

“Thank god” Bertha completed the tunnel and didn’t break again, said McGinn, but “there are still issues out there on cost overruns.” And, like before, he is right.

Seattle politics has moved a lot since McGinn was mayor. The Council has had a clear shift and would likely be much more receptive to many of the issues where the previous Council and McGinn butted heads. But has the city shifted into McGinn’s hands or passed him entirely, preferring the genuine grassroots energy of Nikkita Oliver? Will McGinn’s former support base come back to him? Where does Andres Salomon find space in a race that also includes McGinn?

And, of course, it is still very unclear what kind of factor Murray will play in the race after the recent lawsuit and reporting about allegations of sexual abuse by Murray in the 80s. He has denied the allegations and vowed to continue his campaign. McGinn was evasive when asked if the allegations against Murray prompted his decision to run.