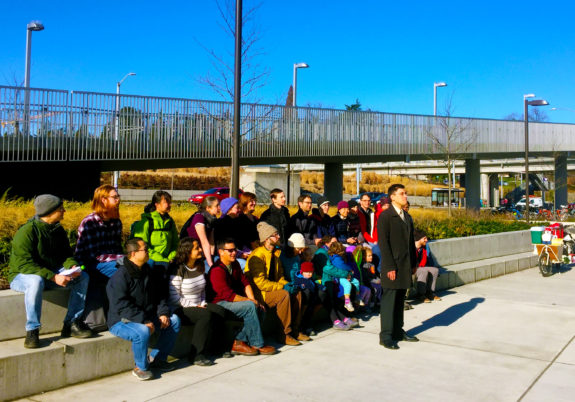 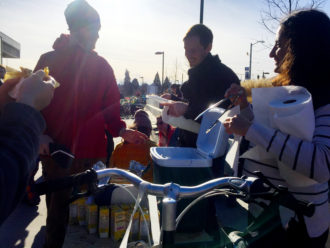 Anna helps serve tamales out of the family cargo bike.

Andres Salomon was born in Ecuador and moved to the United States when he was three. His wife Anna moved to the U.S. as a refugee when she was five. They met at MIT and named their son Atom (which is a bad ass name).

Their family does not own a car. Instead, they get around using a cargo bike. And at his campaign announcement outside UW Station Wednesday, that cargo bike was full of homemade tamales.

“We can say all we want about being a welcoming sanctuary city,” he said in response to a crowd question, “but unless our housing is affordable, unless you can get around safely without a car, we’re not really a welcoming city.”

He has been a dedicated volunteer leader of Northeast Seattle Greenways for years, working to advocate for safe streets. He has — to name just one example — been an unshakeable organizing force for a safer NE 65th Street for years, a project he helped convince the City Council to add to the budget for 2017. He has written guest posts for Seattle Bike Blog, and I have had the pleasure of watching him evolve as a grassroots activist over my years writing this blog. So, full disclosure, I can’t claim to be some kind of neutral voice about him.

His announcement focuses on his experience as an immigrant, the need for serious action to make it easier to build more housing affordably, a call to end homeless camps sweeps, to end youth incarceration, and to not spend money on an “exorbitant police stations that isolate them further from the communities they police.”

He is also a dedicated free and open source software developer who believes the city should invest in municipal Internet service and be dedicated to transparency and open data (“If you have an Android phone, it’s likely running code that I’ve written” due to his work on Linux, according to his campaign website).

He has not yet filed all his campaign paperwork, but he said it’s on the way. His campaign is definitely going to be highly dependent on volunteers. Unfortunately, the city’s publicly-financed democracy voucher system does not apply to this year’s mayoral race. So cold hard cash is going to be vital.

So far, there are few challengers to incumbent Mayor Ed Murray. The Seattle Ethics and Elections Commission website only lists Murray (with over $100,000 on hand), Mary Juanita Martin (Socialist Workers Party, $0 reported yet to SEEC) and dedicated public meeting disruption advocate Alex Tsimerman ($0 reported yet to SEEC).

Salomon’s challenge out the gate is to get media attention and present himself as a “serious” candidate. Typically, local politics watchers look at campaign funds to decide whether someone is “serious,” though perhaps Seattle is changing the value it places on campaign funds after voting for the democracy voucher system. We’ll see.

He also has never run for political office, so he will have a lot to learn about the theater of it all. He has grassroots organizing experience, but now he needs to translate that into major endorsements.

So far, most of the already-established local politics figures have opted to run for the open City Council seat Tim Burgess is vacating rather than challenge Mayor Murray. But there is a lot of frustration with Murray’s lack of action when facing any political friction. From affordable housing to safe streets to police reform to responding to homelessness, he has been a source of frustration to people engaged at the grassroots level.

And Murray still politically owns the controversial Hwy 99 downtown car tunnel he helped push through as a state legislator, which could easily encounter more problems before November (the boring machine is under Belltown now). I don’t understand why people so far seem convinced he has this election sewn up.

Is Andres the person to unseat Murray? He’s got a lot of work ahead of him, but he works very hard.

Since the Democrats got slaughtered across the nation (Presidential popular vote aside, they got creamed in vital state-level races, too), there has been a lot of talk about the need for more people to lace up their shoes and run for office. You can’t win if you don’t run. But it takes a lot of guts to put your life story out there like this. So kudos to Andres. I look forward to covering the race as it develops.

Here’s the sheet his campaign was handing out at the launch: 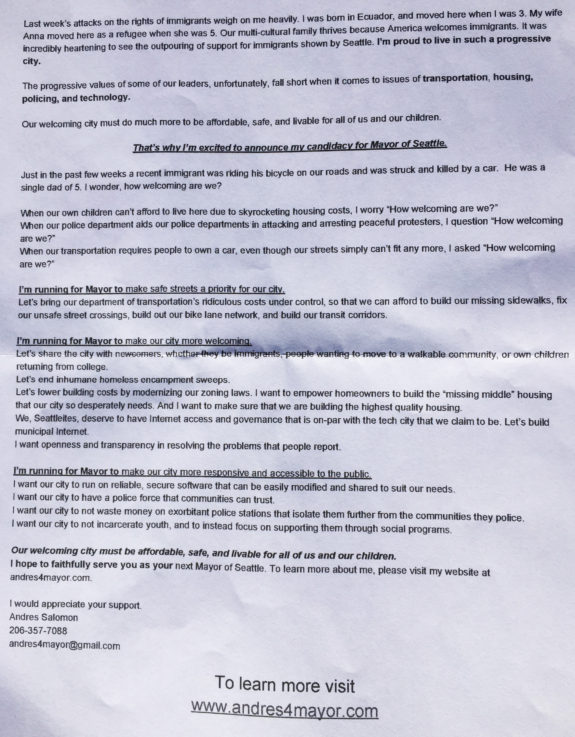 Founder and Editor of Seattle Bike Blog.
View all posts by Tom Fucoloro →
This entry was posted in news and tagged 2017 mayoral race, andres salomon, ed murray. Bookmark the permalink.