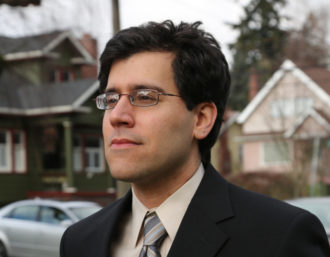 When Andres Salomon arrived at UW Station with a cargo bike full of homemade tamales and announced his campaign for Seattle mayor, he did so because it seemed nobody else was preparing to challenge the well-funded and seemingly-popular incumbent Ed Murray.

Though Salomon (a past-and-hopefully-future contributor to Seattle Bike Blog) was concerned about three years of “city mismanagement,” he said he couldn’t find anyone willing to run against Murray.

“I wanted a Mayor who would make the city a better place,” he said in a statement explaining his departure from the race. “I asked a number of people to run against Murray. I begged people. I asked Councilmember O’Brien. I asked fellow activists. I brought it up in meetings. Everyone I spoke to said no. I felt I didn’t have a choice. I didn’t have any real desire to become a career politician, but I believed that I could do better than Murray.”

But that has since changed. “Over the past two weeks, the race has been completely transformed,” he said in his statement.

A month after announcing his campaign February 1, Nikkita Oliver also entered the race (Salomon welcomed her to the race). Most mainstream political attention was still focused on the open City Council Position 8 at-large seat (Tim Burgess is not seeking reelection), though Oliver had a big campaign launch event and has a lot of grassroots momentum and a growing campaign account.

Then a lawsuit alleging Murray sexually abused a teenager in the 80 hit the headlines in early April, and the number of candidates started growing. Murray denies the allegations.

With Former Mayor Mike McGinn and waterfront champion Cary Moon both in the race, Salomon said he would rather not “split the vote with other who share my values” and would instead support them. “I look forward to a better Mayor in 2018,” he concluded.

To run an “outsider” campaign for mayor, you need a massive and very organized volunteer effort to compensate for the cash and name-recognition disadvantage. It was going to be a huge lift for Salmon to be able to build such an operation (the Seattle People’s Party supporting Oliver, for example, appears up to the task). In a small field, maybe the volunteer effort could have come together more easily. But as more and more candidates joined, the task was getting that much harder.

My hat’s off to Salomon. He took a risk putting himself out there, and he directly challenged the idea that Murray should cruise to reelection when others weren’t taking the mayor’s race seriously. I am selfishly excited to have him back to organizing his community for safe streets, though. He has shown that he can lead a lot of change from outside City Hall, too.

On February 1st, I publicly announced that I was running for Mayor of Seattle. The fact that no one else was challenging Mayor Ed Murray and the prospect of another four years of city mismanagement was enough to motivate me to run. Over the past two weeks, the race has been completely transformed. Two exciting candidates have joined the race this week, all while Murray faces shocking allegations from three separate people. Rather than split the vote with others who share my values, I feel that it’s now time for me to bow out of the race. For my wonderful supporters and others who have followed the race so far, I believe that an explanation is due.

Under Murray, I watched the Bicycle Master Plan cut in half. I watched as Seattle completely bungled bike share (118 other US cities managed to do it, but not us). I watched some very qualified and passionate public servants leave their city jobs out of frustration. I watched the Mayor back off of allowing Missing Middle housing, such as the backyard cottage my family had planned to build, while our city faces a crisis of housing supply. I watched the city make very public claims about closing sidewalks for construction only as a last resort, but then fail to make coherent rules. Like most of us, I still see closed sidewalks every day. I watched the city do absolutely nothing after Andy Hulslander was killed biking on NE 65th. In the two years since then, two pedestrians have been killed crossing that same stretch of NE 65th. I watch my wife bike to our midwife’s clinic on Meridian Ave N where the city “completed” construction of a protected bike lane that actually isn’t there.

I wanted a Mayor who would make the city a better place. I asked a number of people to run against Murray. I begged people. I asked Councilmember O’Brien. I asked fellow activists. I brought it up in meetings. Everyone I spoke to said no. I felt I didn’t have a choice. I didn’t have any real desire to become a career politician, but I believed that I could do better than Murray.

Many warned me against challenging Murray. But my family was supportive, and so were many others. Two of those supportive people are now candidates in the race – Cary Moon and Mike McGinn. I believe both would make excellent Mayors. I would rather support them than run against them.

Mike McGinn played a role in my decision to run, even years before I made it. In 2013, three generations of a family were torn apart while crossing NE 75th — two new grandparents lost their lives, and a mother and her infant were critically injured. McGinn, the Mayor at the time, personally attended the memorial walk that I had helped organize with several community groups. I have yet to see current Mayor Ed Murray attend one of the (far too) many memorial walks we’ve held for victims of traffic violence. McGinn directed the city to immediately begin safety improvements along NE 75th, and they were finished within six months. Those improvements were scheduled to be extended to other dangerous parts of NE 75th and Banner Way NE in 2014 under Ed Murray, but three years later they have yet to be completed.

Back in January of this year, my wife and I met with McGinn after dropping my son off at preschool. We took a walk around Green Lake and talked about whether I should run. He was incredibly generous with his time and frank about the realities of running and holding office, but also optimistic and full of enthusiasm. It was clear how much he loved being Mayor. As the walk concluded, I asked if I could send him my website and platform for his feedback. He paused, and told me that he couldn’t do that in good conscience. He explained that he was thinking about running. I like to think that my compelling speech about how badly the city was being run was what made him think about running. Even if that’s not true, please don’t ruin it for me.

We kept in touch. He would email me an idea for my campaign, or I’d call him for advice. He did this for free, which I was hugely appreciative of. When the Murray scandal broke, I emailed him but there was no response. I knew that meant McGinn was in. I was happy to hear the official announcement.

Seattle is fortunate to have some great candidates in the race. The last thing I would want do is split the vote with others who share my values. Instead, I’d like to direct my energy into advocating for a safe and welcoming transportation system that works for all of us. Thank you to everyone who supported me, especially the amazing volunteers for bringing so much time and talent to a grassroots campaign. If anyone wants to discuss Seattle’s challenges around transportation, or our housing and technology needs – please don’t hesitate to reach out. I look forward to a better Mayor in 2018.

This entry was posted in news and tagged 2017 mayoral race, andres salomon. Bookmark the permalink.