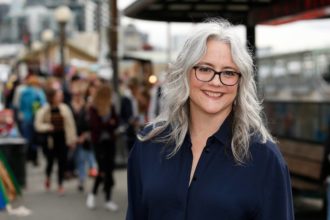 Moon has been a vital organizer for a people-focused waterfront downtown and currently serves on the One Center City advisory committee. Though her efforts to promote a surface street and transit alternative to the downtown car tunnel did not win, her efforts have shaped Waterfront Seattle’s plans for a better waterfront. We could have had a reconstructed viaduct, after all.

As Mike McGinn was announcing his bid for mayor Monday, Moon was sitting down with Eli Sanders at the Stranger to get deep into the issues (she was exploring the run before the allegations against Murray came out, her campaign’s marketing firm said). She presented a bold vision for transportation, especially downtown:

ES: Let’s talk about transportation. A lot of what goes on in the transportation world—as you know from your work on the waterfront—runs through Olympia and not Seattle. But what will you do as mayor to solve Seattle’s transportation problems? What can you do?

CM: I feel like we need to get ahead of growth with investments in transit. So, looking at how we invest at the city level in additional transit service—and bus only lanes—it’s about getting enough of an investment in transit and being really ruthlessly efficient in how we allocate the street space that we do have. That means space for busses, space for a complete bike network, making sure neighborhoods are all walkable, and doing everything we can to make those more space efficient modes the modes of choice and give people real alternatives to driving. That’s the only way we’re going to get ahead of the congestion problem.

She goes further into transportation on her website, specifically endorsing the downtown Basic Bike Network: 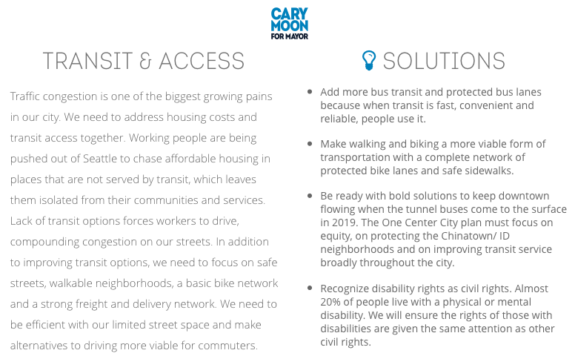 With Murray, McGinn, Moon, Nikkita Oliver and Andres Salomon in the race so far (a handful of other candidates have not yet reported more than $1,000, though the filing deadline is May 19), Seattle Neighborhood Greenways has already announced their intention to host a mayoral forum:

This entry was posted in news and tagged 2017 mayoral race, cary moon. Bookmark the permalink.