The politically-active sibling organization to Cascade Bicycle Club released its latest round of 2017 endorsements Tuesday, and Senior Policy Director Blake Trask said the organization will be writing more about their choices over the next week.

The choice of Moon for Mayor puts WA Bikes at odds with Transportation for Washington, who endorsed Jenny Durkan. TFW is the politically-active sibling to Transportation Choices Coalition. TFW is focused primarily on transit, but also includes biking and walking in their mission. The organization had endorsed Jessyn Farrell in the primary. TFW and WA Bikes are on the same page on most their choices, so the Mayor disagreement is notable.

Seattle Subway, which has endorsed Moon, expressed surprise at the TFW endorsement of Durkan, since their transit-loving members strongly favor Moon.

In Seattle, WA Bikes had already endorsed Teresa Mosqueda and Lorena González for their City Council Positions during the primary and continue to support them in the general election.

Seattle Bike Blog has not yet endorsed a candidate for Mayor or City Council Position 8 (of course you should vote for Lorena Gonzalez for Position 9). Let us know what questions you want Seattle Bike Blog to ask Moon, Durkan, Jon Grant and Teresa Mosqueda in the comments below.

You can also see Moon and Durkan debate their visions for a livable Seattle at the Mayoral Forum on Arts and the Environment noon Monday at KEXP.

The deadline to register to vote online is October 9. Ballots will be mailed October 18. The election is November 7.

Here is the cheat sheet for the rest of the WA Bikes endorsements: 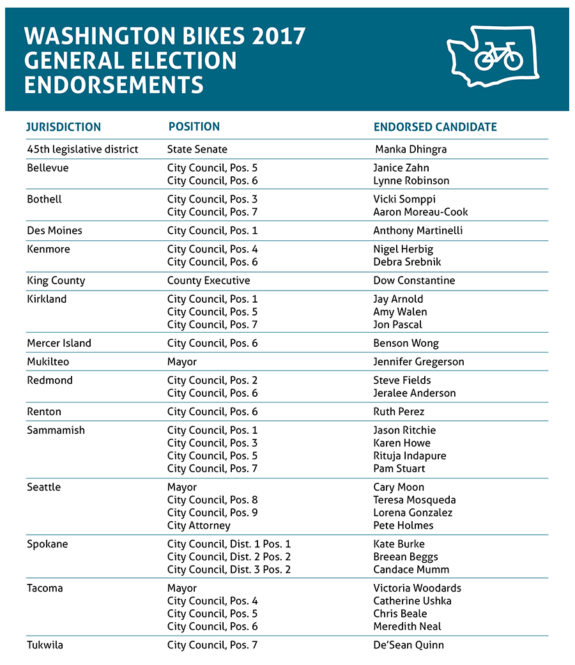