Salomon: Why construction can’t just close a neighborhood greenway without a safe detour

EDITOR’S NOTE: Andres is a family-biking father dedicated to safe streets. He’s the leader of NE Seattle Greenways and sometimes contributes to Seattle Bike Blog. I encountered this closure the other day on a ride with several people, including Madi Carlson and her two kids, who were riding a tandem with a trail-a-bike on the back. This closure was a serious obstacle for them (she’s a well-documented bad ass, so obviously they powered through it). If neighborhood greenways are really supposed to be important people-focused transportation routes, closures like this give users the impression the city doesn’t actually take that goal seriously. 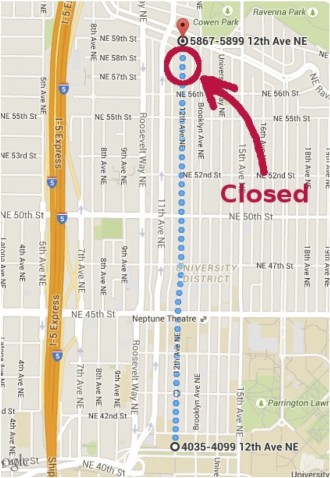 Recently, Sound Transit closed the 12th Ave NE Greenway for tunnel-related construction. This closure will last at least three months, and was done without providing a safe, welcoming, or even ADA-compliant detour.

Not only do we need to fix this, but we also need to ensure that any future neighborhood greenway closures provide a detour that accommodates All-Ages-and-Abilities (“AAA”) users.

The 12th Ave NE Greenway runs through the heart of the University District, two blocks west of The Ave. The northern part of it meets up with the buffered (and soon to be protected) bike lanes on NE Ravenna Blvd. This is a very desirable connection for families, as it provides a separated bike route connecting to Green Lake, Cowen Park, and Ravenna Park. Unfortunately, the street closure is just south of that connection, between NE 56th St and NE 58th St.

This closure includes the full street, as well as at least one sidewalk. On the north side of construction, there are confusing, and not very visible detour signs to direct cars and people walking in opposite directions. Following the wrong sign takes you to a parallel arterial street, which is exactly what someone using the greenway would be trying to avoid. 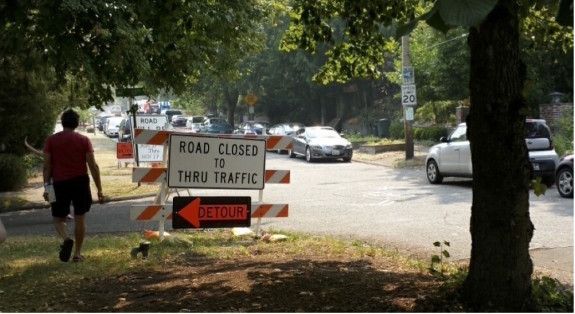 Wait, which way is the detour? 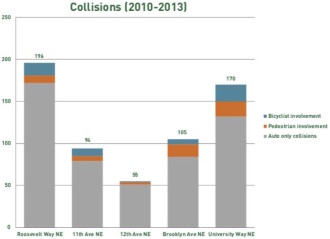 If you follow the wrong sign or can’t make it up over the curb, you get to take 11th Ave NE or Brooklyn.

The marked detour for people walking and biking leads to a narrow, broken sidewalk. The sidewalk lacks curb ramps or driveways, which is problematic for people with disabilities, parents with strollers, cargo bikes, etc. The sidewalk certainly wouldn’t be able to handle multiple people going in opposite directions. It’s pretty clear that this detour does not take people biking into consideration. 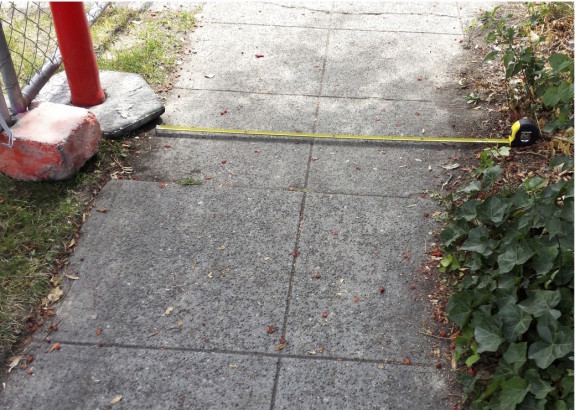 This sidewalk detour is less than 4 feet wide, which is the required width for sidewalks.

The southern end of the detour has no curb ramps. You’re SOL if you can’t get off of or onto curbs.

I’ve complained in the past about how the city handles sidewalk and bike lane closures on arterials. It’s even worse on neighborhood streets, where the city will allow a sidewalk to be closed even when it’s the only sidewalk available. It’s going to be a problem if greenways are treated like normal residential streets for construction closure purposes. We need a policy in place for greenway construction detours. 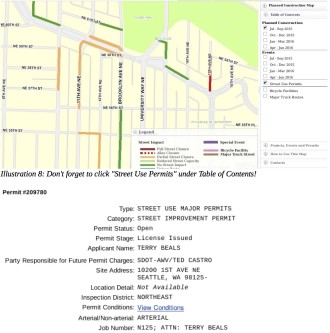 Seattle has an interactive map showing planned street closures, that in theory warns the public which streets to expect closures and detours on. The map shows street, sidewalk, and parking impact for each permit location (although lacks bike lane impact, for some reason). This closure does not show up on the map, which calls into question the reliability and accuracy of the map. Perhaps it’s the case that the lack of location in the permit is confusing the map software, as well as anyone working for the city who cares about greenways? 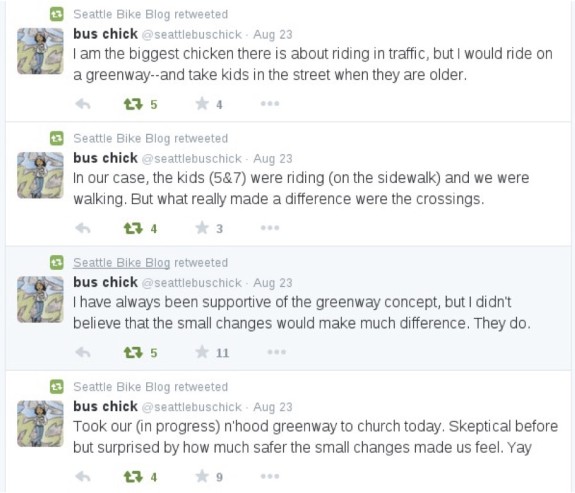 These tweets from Carla Saulter show the value of safe neighborhood greenways for people interested in biking, but concerned about safety. If greenways close without a safe detour, this value is lost.

The 12th Ave NE Greenway may not be Seattle’s most popular greenway (for reasons that a follow-up post will cover), but it’s still a greenway that people have come to rely upon. Just like transit needs to be reliable in order for people to find it useful, it is imperative that our AAA bicycle infrastructure be reliable. It’s unacceptable to just close greenways (or protected bike lanes, for that matter) without providing safe AAA alternatives.

12 Responses to Salomon: Why construction can’t just close a neighborhood greenway without a safe detour