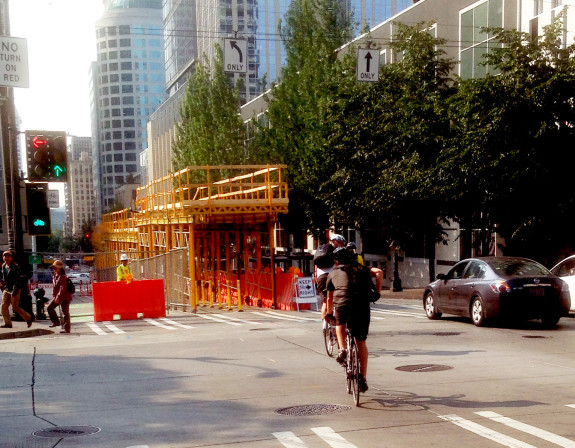 The moment fences went up blocking the 2nd Ave protected bike lane just south of Pike Street, I started getting tweets and emails from baffled people who, rather than having a protected bike lane were detoured mid-block into the general traffic lane:

Holy cow @seattledot, that bike lane closure on 2nd Ave is brutal. @seabikeblog might want to raise a warning. #SEAbikes

Somebody is going to get hurt at 2nd/Pike. No warning, closed bike lane spits you out into car traffic. @seattledot Can something be done?

@seattledot @seabikeblog I gave kudos for the revamped 2nd ave bike lane, but in the last few weeks it has become worse than it ever was.

Work has begun on a 40-story building at 2nd and Pike, and construction equipment needs to be staged in the space currently occupied by the sidewalk and protected bike lane. That’s fine, so long as a reasonable temporary option is provided.

But the solution put in place is far from reasonable.

This is the the northbound route. Makes sense actually, but peds coming from Pike have no signs not to take bike lane pic.twitter.com/WzzystXg34

The bad part is when you’re headed southbound (see image at the top of the post). People are directed from the bike lane near the curb toward the scaffolding, then suddenly directed into the general traffic lane to share space with equally confused people driving.

A bike protected bike lane cannot simply disappear like this. It is dangerous and confusing for everyone. People choose to bike on 2nd because of the bike lane, and in a way a protected bike lane is an unspoken commitment by the city to its people that if they bike here, they’re gonna be taken care of. It cannot just disappear.

The good news is that SDOT has heard these concerns.

“I reviewed the site this morning and we are reviewing options. Our inspector is working with the contractor to reopen the bike lane,” Seattle Traffic Engineer Dongho Chang wrote in an email response to Doug Ollerenshaw, a concerned user who copied Seattle Bike Blog on a detailed email to the city.

The first priority is to find a safe solution that preserves a walkway and the protected bike lanes. The easiest way to do this is to turn the leftmost general travel lane into a temporary protected bike lane, lined with those plastic construction barriers already guarding the scaffolding. Or, depending on the construction project’s true needs for space, maybe the scaffolding and temporary bike lane can be moved closer to the curb to avoid closing a lane. That’s for the city and the contractor to figure out.

What can’t happen is for construction activity or concerns about impacting car traffic to lead us to put people biking or walking in danger. Some temporary traffic backups are an acceptable cost to help grow the city. Putting people in danger is not.

“Our public streets should not be given over to developers in this way when it compromises safety,” wrote Ollerenshaw. It seems strange that this even needs to be said, but apparently it does.

After all, the construction permit posted at the site (thanks for the tip Marley!) and approved by the city clearly states the intention of not providing a southbound protected bike lane:

How did this get approved? I hope the city is looking into that and will make whatever internal changes need to happen to avoid this from happening again.

Founder and Editor of Seattle Bike Blog.
View all posts by Tom Fucoloro →
This entry was posted in news and tagged 2nd ave, construction, dongho chang, sdot. Bookmark the permalink.