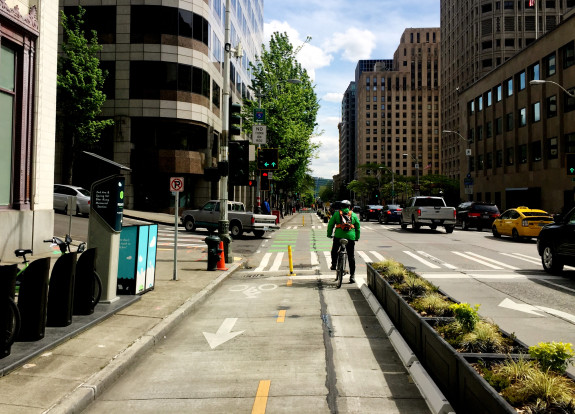 There is still more signal work to complete, but most the physical upgrades are in place and ready just in time for the viaduct closure and Bike Month. 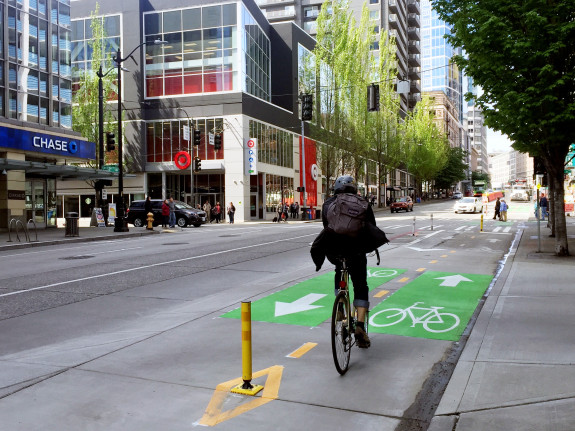 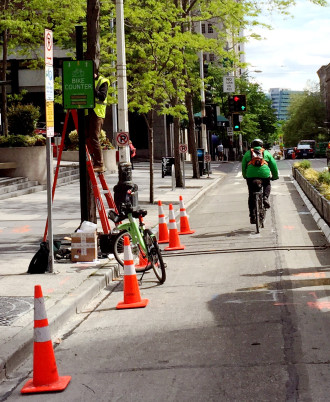 Thanks to Commute Seattle, the 2nd Ave bike lane is also getting a bike counter with a visual display ticking away as people bike past it.

The city has already been counting bikes behind the scenes (you may have noticed the black tubes in the bike lane between Marion and Madison). The tubes will be switched to in-pavement counter technology, and you will be able to watch your trip get counted as you bike by.

Counters are a fun way to show how many people are biking, but they are also a way to collect important data about bike use. The city counted 267,301 bike trips in the 2nd Ave bike lane in 2015. That’s not too shabby for a bike lane oasis in the heart of downtown that does not connect to any other complete and comfortable bike routes.

You can be one of the first counted and score a doughnut hole at Commute Seattle’s unveiling party 7:30 to 8:30 Monday morning.

No detour during construction

As exciting as the 2nd Ave bike lane upgrades are, the weeks of closures to complete the work highlighted the need for SDOT and builders to preserve bike routes during construction by routing a temporary bike lane around all closed sections. If that means closing a parking or general purpose lane, then so be it. Safety should be the top priority during construction work, but SDOT chose vehicle throughput over bike safety during the 2nd Ave construction project.

The irony of making a bike route more dangerous in order to make a bike lane safer is pretty hard to wrap your head around.

Bike trips on 2nd Ave tripled when the new lane was installed in 2014, and all the people who have since relied on 2nd Ave as a more comfortable bike route through downtown (especially northbound) were left searching hopelessly for an alternative while it was closed for construction.

There are no other safe and comfortable ways to bike through downtown. Do you bike up car-clogged 1st Ave? That’s the fastest way, but it’s stressful as hell. Or do you try to swim with the buses on 3rd Ave? 4th Ave is a big climb, but at least once you make it under the Yesler bridge it has a bike lane. But then the bike lane disappears when you reach the library. Even Western — a lower-traffic, out-of-the-way bike route — has some nasty bike lane closures these days near Pike Place Market.

Luckily (and it really was pure luck), I have not heard of anyone being injured trying to get around the bike lane closure. But the city must either do better or stop saying that safety is its top transportation priority.

The closure pain also highlights why it’s such a terrible idea for Seattle to further delay the planned build-out of the Center City Bike Network. If we had a grid of safe and comfortable bike routes (which the city was supposed to be building at this very moment), then people could at least find a comfortable detour option when their primary bike route is closed for whatever reason (collision, construction, Bertha sinkhole, etc.).

The 2nd Ave bike lane has effectively demonstrated the potential for protected bike lanes downtown, which was its stated mission as a pilot project. But until it is connected to a network of similarly comfortable bike routes to and through downtown, it will remain an island only reachable by those willing to swim there.

This entry was posted in news and tagged 2nd ave, commute seattle, sdot. Bookmark the permalink.