What Viadoom? Take control of your own commute by biking 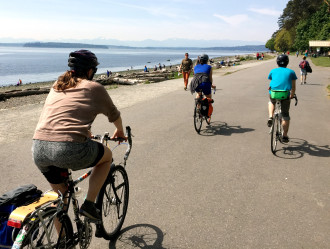 What Viadoom? This could be your West Seattle commute.

The Alaskan Way Viaduct is closing Friday for two weeks as Bertha tunnels precariously under its foundation. As people who drive and take the bus (especially in Viaduct-dependent West Seattle) fret about the threat of huge traffic backups, there is one dependable way you can take control of your own commute: Bike.

Aside from the fun and adventure of biking across town every day, a bike commute takes nearly the same amount of time every day regardless of traffic. In a city where a single highway seafood spill can bring the entire motor vehicle system to crawl, dependability is a huge reason so many people have switched to biking.

You don’t need to wait until 2033 for light rail service to free you from traffic. You can take control yourself today. All you need is a bike that works and the will to give it a shot.

While the viaduct closure will impact many commutes, we’re going to focus on West Seattle for this post since it is the most Viaduct-dependent.

And thanks to the wonderful people at West Seattle Bike Connections, we have an extremely handy map to share for anyone interested in giving a downtown bike commute a try. The map below compiles three popular route suggestions the group posted recently to get people ready to the Viaduct closure. If you click on any of the route lines, you’ll see a link to view that route in detail on RideWithGPS. From there, you can even download turn-by-turn directions. Pretty cool, eh? Thanks, WSBC!

If it has been a few years since you made the ride to downtown, you may be pleasantly surprised by some significant route improvements. There are still a couple problem spots and bike lanes in need of an upgrade, but most of the route from the West Seattle Bridge to downtown is in a bike lane or on a trail.

Another great option is to bike to the Water Taxi (the blue ships on the map above), which is very bike-friendly. The West Seattle terminal is a long walk from most of the neighborhood, but it is a perfect bike destination. Plus, it’s beautiful: 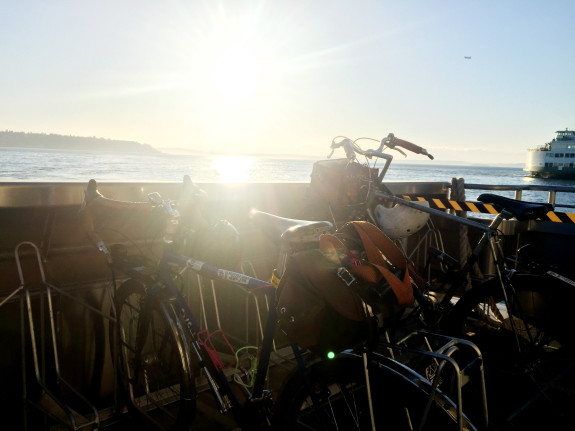 The Viaduct closure even comes just in time for Bike Month, when workplaces and organizations put extra effort into helping people get into biking, especially to work. WA Bikes even has a handy website to help you track your bike trips, which some people find helpful for developing a biking habit.

Remember, those hills only get easier each day you bike up them.

Are you interested in a bike commute during the Viaduct closure, but have questions? Ask them in the comments below!

Are you a regular commuter who wants to help guide your neighbors on a comfortable and inviting ride to work? Post an event listing in the Seattle Bike Blog calendar. Just pick a starting time and public place (coffee shops are perfect) and tell people where you’re heading. I’ll help spread the word.

33 Responses to What Viadoom? Take control of your own commute by biking