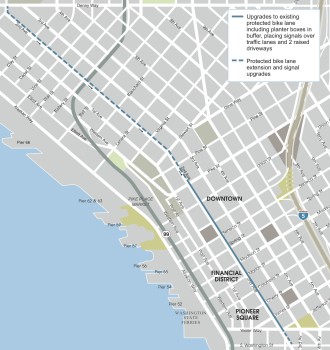 When the 2nd Ave protected bike lane opened in October 2014, it was created using mostly paint and movable plastic posts because the city considered it a “pilot” project.

Well, it’s been about a year and a half, and now it’s hard to imagine what biking downtown was like without it. So it’s officially becoming permanent, and that designation includes some significant upgrades.

We’ve already reported that many of the plastic posts will be upgraded to planter boxes. This change hopefully will not only provide a little more separation from motor vehicle traffic but should also make the street look better.

But perhaps the most exciting upgrade is coming to major driveways: The bike lane will be elevated a couple inches so cars turning into garages will need to mount a curb before crossing the bike lane. This is a big deal because one of the biggest dangers for people biking in the lane today is someone in a car turning across the bike lane in front of them. The curb will hopefully make people driving slow down and pay more attention before crossing. The raise in the bike lane will also help remind people biking to pay extra attention in case someone driving isn’t.

Construction work to raise the garage access at the 2nd Avenue pbl. pic.twitter.com/ECqw2W8Snt

The bike lane will also be raised at loading zones with lots of people crossing, like hotel drop-off and valet areas. People on foot have the right-of-way, so the raised lane should help reinforce that these are mixing areas where people biking need to be ready to slow or stop. It will probably also help people with mobility issues get from a car to the sidewalk.

Unfortunately, this means downtown’s only quality bike lane will be closed off and on for the next month. If the city had installed protected bike lanes on 4th and/or 5th Ave during the past year and a half, people would have had a possible detour option. That’s one huge advantage of a network: It is resilient to construction or emergency closures because people can reroute. Instead, people biking will be detoured to 3rd Ave, which has no bike lanes and has heavy bus traffic. It’s going to be a rough month, but the upgrades should be worth it.

If you want to get involved with Cascade Bicycle Club’s efforts to support these changes and push for more downtown bike lanes, join their Connect Downtown team here.

More details on the changes from SDOT:

Starting in late March and continuing through April, the upgrades will be installed along the existing 2nd Ave protected bike lane. During you can expect:

People biking are encouraged to plan their detour route in advance and make sure they identify locations where they are comfortable riding. SDOT would like to thank the public for its patience while this work is completed. If you are interested in knowing how SDOT is creating a Center City Bike Network that helps organize streets to add predictability visit www.seattle.gov/transportation/ccbike.htm.