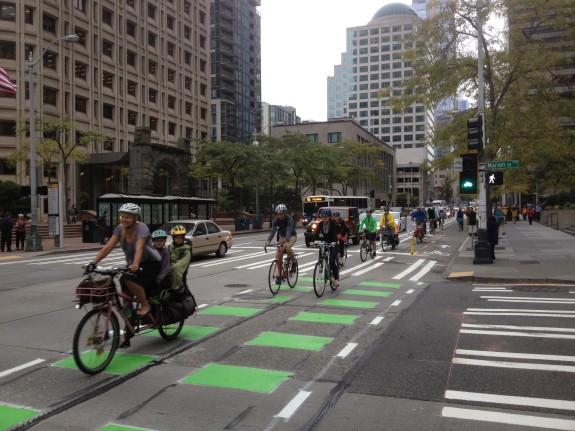 Biking downtown will never be the same again. Monday morning, city workers completed work on a protected bike lane on 2nd Avenue connecting from Pike to Yesler, ringing in the beginning of a more family-friendly streetscape in the heart of the city’s downtown neighborhood.

“I live two blocks away, and I’m somebody who almost gave up bicycling because it’s so scary down here,” said City Councilmember Sally Bagshaw. But this new lane feels more comfortable for her and others who are on the fence about getting around town on a bike.

And watching Madi Carlson of FamilyRide (and a sometimes contributor to Seattle Bike Blog) cruise stress-free up and down 2nd Ave with two kids on the back of her cargo bike, you can get a sense of how having a little extra protection from cars will go a long way to make cycle more inviting to so many more people.

Of course, there are still a lot of missing links before the new lane connects comfortably to Seattle’s other neighborhoods, but what felt impossible just last week feels within reach today. 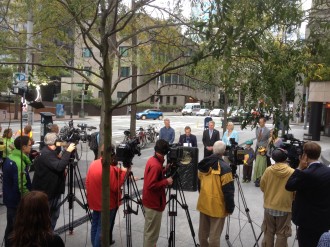 Originally on schedule for construction in 2016, Murray gave SDOT directions in May to make a protected bike lane happen before Pronto Cycle Share launches in late summer. Four months is a very fast timeline for a project of this scale, but SDOT delivered. Now the city has a jump start on creating a safer and more comfortable bike network in the city center.

Unfortunately, the lane was not completed in time to help Sher Kung, a young mother and attorney who was killed at 2nd and University August 29, just ten day before the upgraded bike lane opened. She we struck by a box truck making a left turn, a known problem with the old bike lane that the new protected bike lane attempts to address.

Dick Cantwell — co-founder of Elysian Brewing on Capitol Hill and the Elysian Bar at 2nd and Pike — praised the new bike lane for making it easier for people to get to and from his business.

“I’m very excited as a business owner to have this safe connection,” he said to a crowd of city officials and media Monday morning. “It will take our city’s bike culture up a notch.”

But more needs to be done. He pointed out that there is still no way to safely bike from Capitol Hill to downtown, a need Cantwell knows better than anyone else. His son Nap died in June of 2012 when biking west on Pike at Boren. He was just days away from his 19th birthday.

Tens of thousands of dollars were raised in Nap’s honor to benefit Bike Works, which created a program scholarship in his honor. The intersection where Nap died remains unchanged. 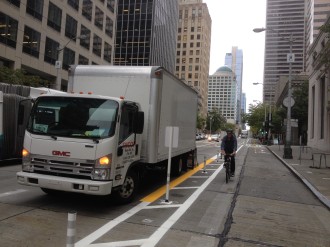 This delivery driver figured out the new loading zones, which seemed to work well.

Like any major road change, there was some confusion Monday morning as people driving, biking and making deliveries tried to figure out the street changes. For example, there were quite a few people making illegal left turns when the new red arrow was showing, despite new signs saying that left turns are only allowed on a green arrow.

“Anytime you roll out a new facility like this, there’s gonna be some confusion,” said incoming SDOT Director Scott Kubly. Since adherence to the left turn signal is vital to safety on the new bike lane, this is a detail city officials will need to monitor closely in case enforcement and/or design changes are needed.

But Cascade Bicycle Club is being proactive about the changes and have mobilized a small army of volunteers to stand near every left turn location to help people driving and biking understand the new road design. These protected bike lane ambassadors will be there all day today and tomorrow spreading the word and answering questions. So if you see them, say hello and thank them for their help making the project work better.

And if you want to help, Cascade could use some help filling two-hour shifts Tuesday between 8 a.m. and 7 p.m. Email Brock Howell at [email protected] with the times that work for you. 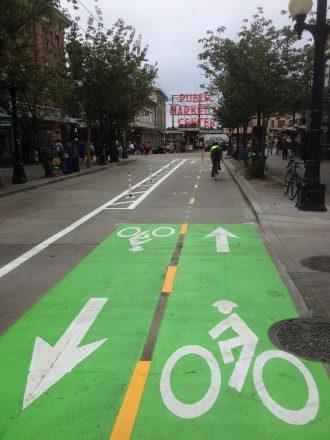 The entire project is not perfect. The Pike Street intersection was particularly confusing and felt a bit dangerous. North of Pike, the old one-way painted bike lane is still in place, and there is a new two-way bike lane for one block of Pike stretching from the market to 2nd.

The bike lane leading to the market is awesome, and the connection to and from the market is seamless and easy because people on bikes can simply join the all-way walk “scramble” signal phase.

But the intersection at 2nd and Pike is a real challenge, in part due to a relatively new bus lane on Pike east of 2nd. It’s not clear how to turn right to get into the new 2nd Ave bike lane since there is currently no waiting place or bike box to help people make a two-stage right turn. Signs say to use the crosswalks, but biking on sidewalks and in crosswalks is not comfortable, especially in an area packed with so many people.

People biking northbound on 2nd have an easy right turn onto Pike to head east, but it is a bit confusing to make a left turn into the new bike lane leading to the market. Trying to make a two-stage turn is very uncomfortable and puts you in the path of turning cars. The best option is to use the crosswalks, but again that is not a comfortable or intuitive solution in such a busy area.

People heading straight on eastbound Pike could also face some conflicts with people also driving straight. The bike lane essentially leads into the center lane, but people driving in the right lane will need to use the center lane to avoid driving in the bus lane. Installing complete protected bike lanes on Pike should be a top priority for the city, but in the immediate term something is needed to make it more clear where everyone should go.

The city had originally planned an all-way walk/bike signal phase here, but that has not been put into action.

The all-way signal has also not been put into action at Yesler, the upgraded bike lane’s southern terminus. There was some confusion about how to get in and out of the new bike lane on Yesler between 2nd and Occidental, though it did not feel as dangerous as the intersection at Pike. However, an all-way walk/bike phase would work wonders here, including for people walking to and from Pioneer Square Station. Hopefully the city decides to follow through with that plan.

And, of course, hopefully the new bike lane can be extended further north and south sooner rather than later.

But despite these rough edges, the project completely changes how comfortable it feels to bike through downtown. Below are two videos I shot using a helmet cam. The first was taken in 2011 (you can see Occupy Seattle in its infancy at 3:25). The second was taken this morning. Play the second video when the first gets to about 0:35 to compare the difference (apologies for the shaky video).

Founder and Editor of Seattle Bike Blog.
View all posts by Tom Fucoloro →
This entry was posted in news and tagged 2nd ave, downtown, protected bike lanes. Bookmark the permalink.